Protecting a stone retaining wall from water running down it

I have stone-and-cement retaining walls on two sides of my sloped driveway; they're new, and have cement caps. There's a long wall on the side of the driveway that's sloped about 1:20, and at the bottom end is a shorter wall that is sloped at about 1:40. The walls slope towards their mutual corner.

Water runs down the driveway towards both walls. The long wall is protected from water by a granite curb, but that just directs the water over the short wall. The water pours over the top of the wall and runs down the face and through the stones. I'm worried that this will harm the wall, especially with all the freeze cycles we endure in New England.

I want to add a second curb that protects the shorter wall from water, but which ends about 2' from the corner. Water would be directed through this gap, and somehow be brought away from the wall so it doesn't run down the face.

I can figure out how to choose and fasten the new curb (or I'll post a separate question): for the moment I'm looking for ideas on keeping the water away from the wall. An example would be to take some heavy rubber sheeting, glue it to the top of the wall, and drape it down the back of the wall, with the bottom edge ending in a trough to take the water away. But, I doubt the glue joint would last more than a season or two.

So, any ideas on how to protect the wall from water? (I'm also interested in comments on whether my worry is valid; it's a well-built wall, and perhaps it will just shrug off the water.)

Here are some pictures. First, from the driveway side; note the curb down the wall on the right: 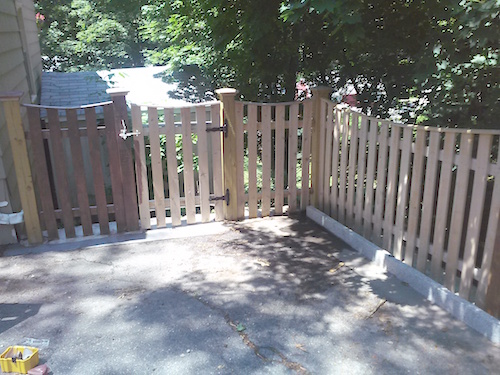 Second, from the back of the shorter end wall. I'd want to have water coming over the corner at the left, but protect the wall from the water: 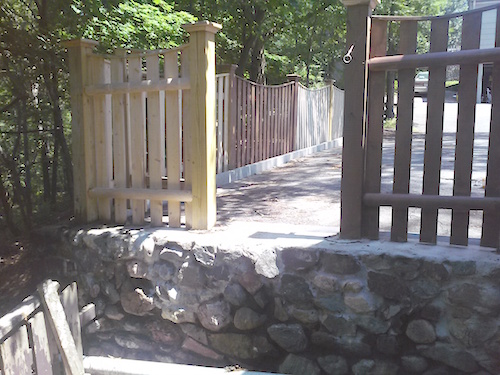 Honestly, I would imagine your walls will be just fine with a little water running over them. The stone walls all over the Irish countryside have been standing for a year or two and seem to cope with the wet, cold North Sea coastal weather pretty well, and most of those aren't even set in mortar. ;-)

What I definitely would do is consider what kind of footing the wall is built on. If there's a chance of water running down the wall and digging a trough at the base that undermines the wall, you might beef up the footing and/or build in some drainage. 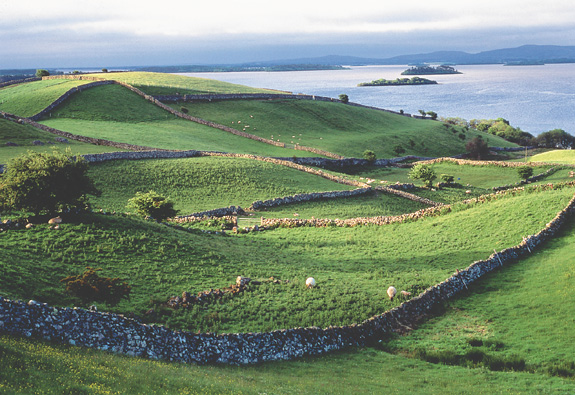 Not the answer you're looking for? Browse other questions tagged water walls stone ice or ask your own question.

6
How to stop outside rainwater from coming in under the wall and through the concrete floor of my garage conversion?
0
Can a natural stone wall be made waterproof without defacing it?
1
Field-stone Foundation on Top of Bedrock, Keep the Water Out?
0
Preventing water from entering carport
0
Water leaking through exterior floor and wall base
1
preventing water from entering my no-step entry
0
How can water be diverted away from the street curb in front of my house?