Ideas for bracing a bed's side rail

We bought a bunk bed and installed both of them on the floor. Through extensive kid use, the partial-length side rail worked loose -- twice. I suspect that the bunk ladder would have provided more support. As you might be able to see in the picture, I already tried adding screws, but it wasn't enough.

I found this diy article about a loose side bar, and Ecnerwal's answer, but I don't think the frame of the bed has enough thickness for the bed bolt. At least that's a better idea than my first one, which was a thru-bolt -- there's not enough room on the inside of the bed frame before the mattress.

My latest idea is a metal bracket that would wrap around the vertical post and screw to the frame on either side. I don't have a vise to bend something, though. Are there joist hangers small enough? Would small L brackets be enough?

Updated: I used carriage bolts at @mazura's suggestion, and fender washers on either side of the wood rail, ending in a basic hex nut. Got all the hardware for $2! 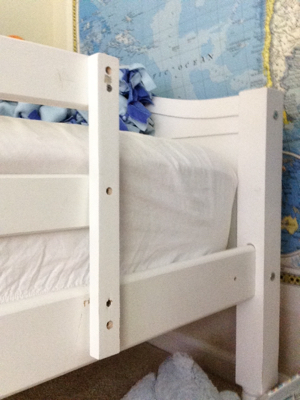 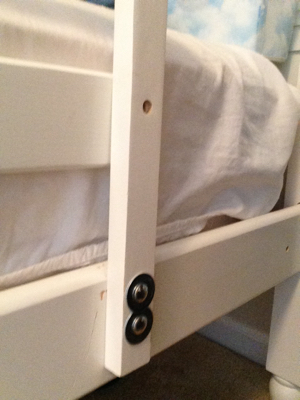 Bed joist seem to not suit to the job here. Different kind of structure work. Your vertical element here works now as cantilever, while in former role (as a ladder as I suppose) it was supported as a continuous beam, which part was hanging up (if your bed is the upper one) or was to be tied as end of that ladder (if your bed was the lower one). Similar tensions, yes, but distributed differently .

I have two suggestions:

If you can't visualize anything from my text wall (sorry about that), I may try to produce some drawings, but I need time with that. Also, more answers - more choices. I encourage other DIY-ers to post their answers, too.

Not the answer you're looking for? Browse other questions tagged wooden-furniture bedroom or ask your own question.

4
Why won't this bed's feet touch the floor?
2
How can I update this very stubborn antique bed frame so the mattress fits properly?
4
Can I use bolts to attach a bed to the walls of my room?
1
Repair squeaky MDF board for a Ottoman Divan Bed
1
Strength of rabbet joint for bed frame
0
how to stop metal hooks in ends of side rails of wooden bed from squeaking
7
Changing loft bed's beam to diagonal braces?
1
Safe assembly of antique Italian four poster bed frame