replacing a light switch with a dimmer

I am replacing a single 3 light track style fixture in our kitchen with an Ikea track that will better light the space. Opening the switch box up this afternoon I saw that the wiring is a little unfamiliar to what I am used to. All of the Whites are tied together and the Black is strung along the bottom of a few of the switches (it's a 5 switch box). The top of the switch in question is a red line. Metering the terminals of the Ikea track I get 0 volts and 120 volts as one would expect with a switch. When installing the dimmer switch (a single pole 2 black wire, one ground dimmer), I attached the black wire from the old switch to the bottom black dimmer wire, and the red wire from the old switch to the top black wire on the dimmer. Turn on the breaker and the off position works dandy, but the dimmer goes from around 90 volts to 93 volts only. I have no idea what to do!

The multimeter may be off trying to accurately measure an AC voltage that ends up looking like chopped AC cycles.

There is a good possibility though that no load on a triac switch of the dimmer could look like an AC waveform of full voltage to the relatively high impedance of the multimeter input if the dimmer design has a resistor/capacitor snubber circuit across the triac. The diagram below shows the typical snubber configuration used (R2 and C2). R2 is commonly a resistor of a couple hundred ohms in series with the capacitor. When the triac is OFF the snubber circuit will be able to pass the AC waveform through when a meter with an typical input impedance of 20K to 50K ohms is used across the open lamp terminals. 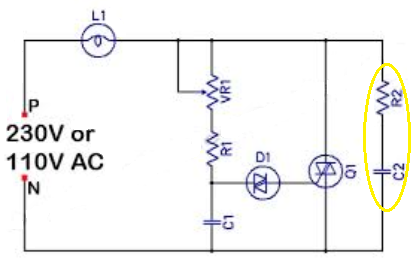