How do I hard wire a T8 fluorescent light fixture with grounded plug to a motion sensor?

I purchased a T8 fluorescent fixture with electronic ballast, which came with a wired three-prong plug. I also, purchased a infrared motion sensor. I want to hardwire the fixture into the motion sensor but as you can see from the diagram, the sensor instruction shows only one wire going to the light fixture. How do I hard wire/splice the two together? I don't mind either removing the plug on the fixture, or using a female plug extension wire connected to the male fixture plug. 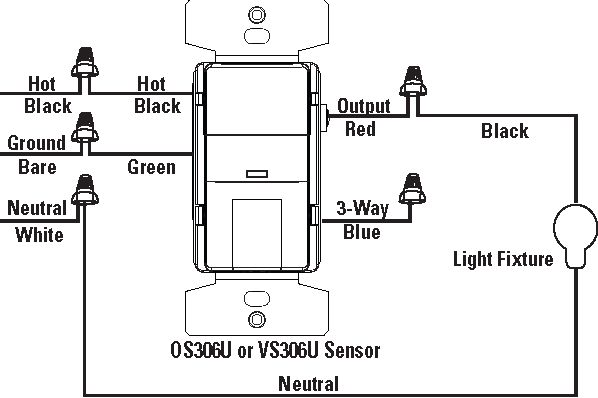 Your light fixture has hot, neutral, and ground.

The diagram actually shows the switched hot and neutral connecting to the light - ground is or should be obvious, it's not shown probably to reduce clutter.

Your sensor / switch device is designed to be mounted into an electrical box with permanent wiring.

Your light fixture with its attached cord (with three prong plug) is meant to be connected into an outlet that is itself mounted in an electrical box with permanent wiring. The lamp itself, when configured this way could be considered a temporary connection to the electrical system.

So you have two options to consider in order to wire up this setup. The first one involves installing the necessary electrical boxes and permanent house wiring such that the switch/sensor assembly is controlling the On/Off of an outlet near the lamp mounting location. Then plug the three prong cord from the lamp into the switched outlet.

Which ever approach you use try to avoid installing by other means where you tap temporary wiring into the permanent wiring supply and then kludge together the switch and fixture wiring with it dangling around in an unsafe manner.

4
How to wire in my replacement fluorescent light fixture?
2
How can I get my fluorescent light fixtures to work with an occupancy sensor?
1
What should I do with the exposed grounding wire during a conversion from hardwired to plug in light fixture?
4
Why was the ground for this fluorescent fixture not connected to the ballast?
0
How can I convert 4 ft fluorescent tube fixture to be used as a plug in fixtures?
0
Grounding a Ballast for wood enclosure when there is no metal?
0
How can I install a ceiling fan with an extension kit that doesn't have a ground wire?
1
LED mirror wiring (reversed polarity connection from manufacturer)
1
Wiring question regarding replacing hardwired fluorescent shop lights with LED plug-in lights
1
How do I power an exterior camera using a pre-existing motion sensor light fixture?