My house (built 1972) has a cathedral ceiling with post-and-beam construction in the main room. The ceiling temperature can get as high as 90F, or even greater on a very hot sunny summer day, as measured from the floor with an IR thermometer ("gun"). The roof doesn't look to be very thick, probably less a foot in total? I'm not sure what insulation is in the roof, if any. This room has quite a few floor registers, however, it is still much colder in the winter and hotter in the summer than adjacent bedrooms (~5F). I was wondering if there is anything that can be done to improve the efficiency of heating/cooling this room. Can more insulation be blown in between the pine ceiling and the roof?

I don't need a new roof yet, the current asphalt shingles look fine so I don't want to do something as drastic as replace the roof to add more insulation but it would be good to know that is an option for the future. 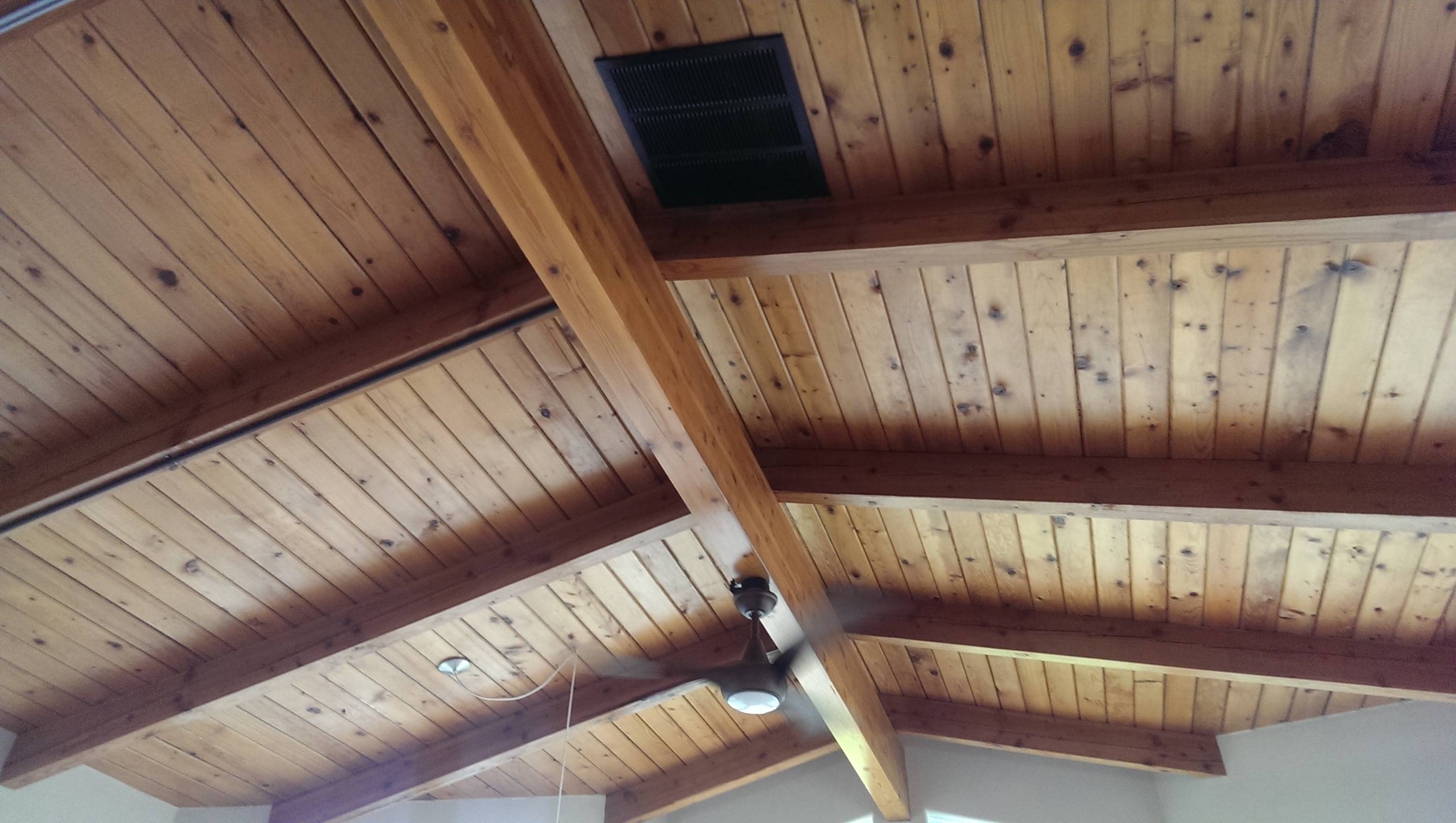 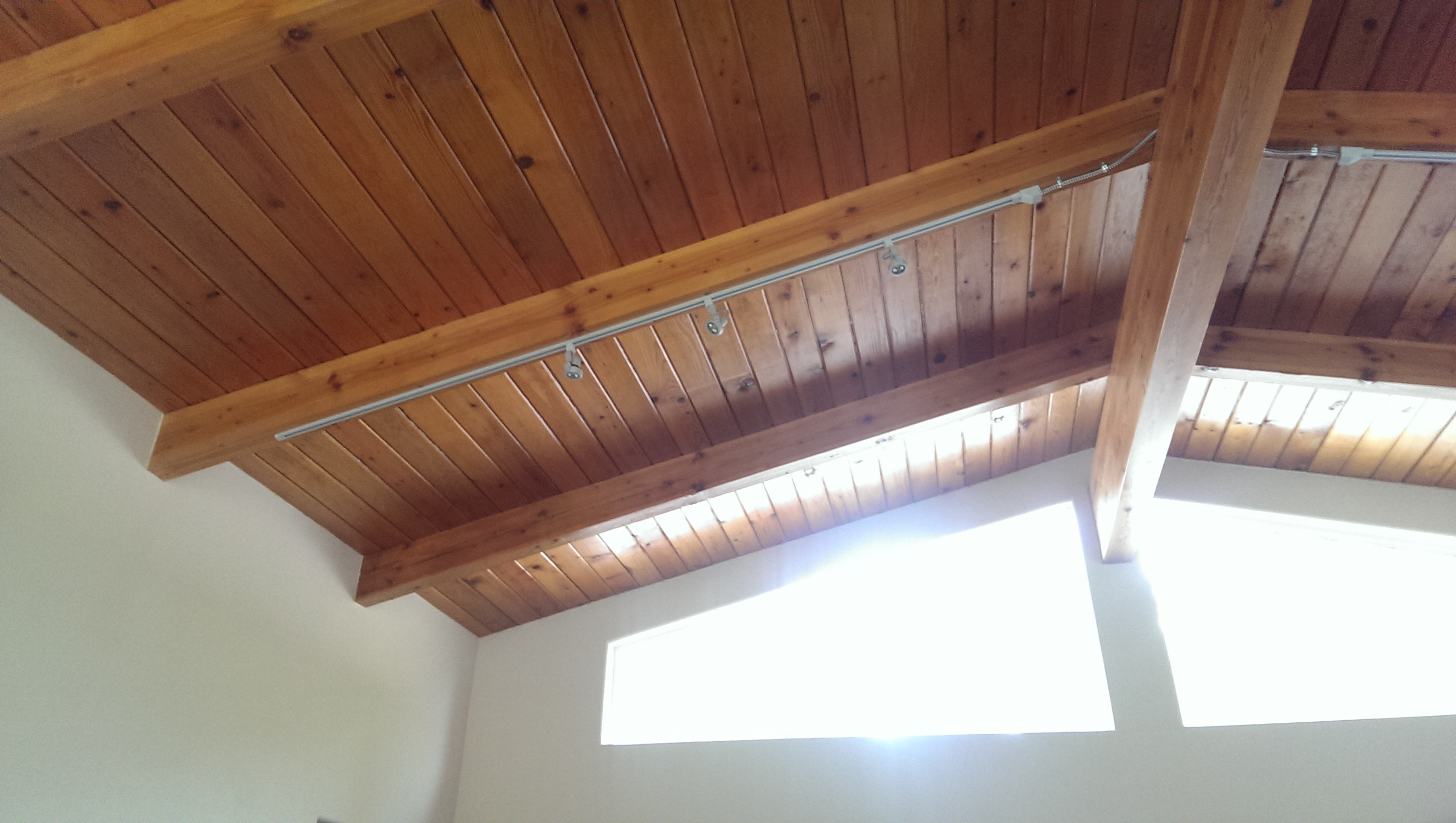 The tongue-and-groove wood planks conceal insulation above them, probably fiberglass batts between the rafters. As you've observed, they are clearly insufficient, because the room is too hot. There are two safe ways to improve the situation:

Can more insulation be blown in between the pine ceiling and the roof?

If you're lucky, you have R-11 nominal and R-5 effective in your roof. That's way below modern standards for exactly the reason you specify: the ceiling is blazing hot in the summer. It's also where much of your heat is leaking in the winter. When the temps and humidity drop in the winter, the cedar contracts and even more warm air escapes through the ceiling.

If that were my house, I'd be aiming for an unvented cathedral ceiling for two main reasons:

In order to get away with an unvented ceiling, you must have an air-impermeable insulation layer directly beneath your roof decking. If you don't, that warm humid indoor air will contact the decking. When the decking temps are below the dew point the moisture will condense. Nothing that can be blown into that space is air-impermeable.

The only code compliant way I know of to insulate that cavity is to retrofit with a minimum 2" depth (Climate Zone 5) of closed cell spray polyurethane foam (ccSPF) in full contact with the roof decking.

Several spray foam vendors (hint: search on Amazon where you can [mostly] trust the reviews) offer a metered dispensing system that lets you fish the dispenser hose into the cavity, withdraw at the prescribed rate, and completely fill the cavity. ccSPF is fairly pricey but so is tearing off a roof or ceiling. If you do it yourself, ccSPF is likely to be the most cost effective long-term solution, since it packs the maximum R value into the space (R-7 per inch).

If I had a home in Eastern Washington, I'd also be budgeting for that steel roof. If you've only got one layer of shingles, you can lay sheets of polyiso directly on the shingles and install the steel roofing over the polyiso. Having prevented embers from getting into the ceiling, and then preventing ones that land on the roof from contacting a flammable material, your house is far better off than most.

0
How to properly insulate low ceiling of low pitched roof

1
PIR/PUR laminated panels…sources? Similar products? (Interior insulated panels)
3
Is it worth updating my insulation?
1
Why am I having an attic ventilation problem this year when I didn't last year?
0
Re-insulating/finishing a basement? options?
1
Insulating a cathedral roof with rigid foam
0
If I want to expose the beams of my ceiling, is it sufficient to just install roofing insulation?
0
Insulation challenge - exposed wood beams with 6" tongue/groove slats on top form ceiling with attic above
0
How to improve insulation in a single room