Can I use a twisted-pair cable for ADSL and phone?

I want to connect my home phone line network to my ISP box and my ISP box directly to the France Telecom line using twisted pair cable. 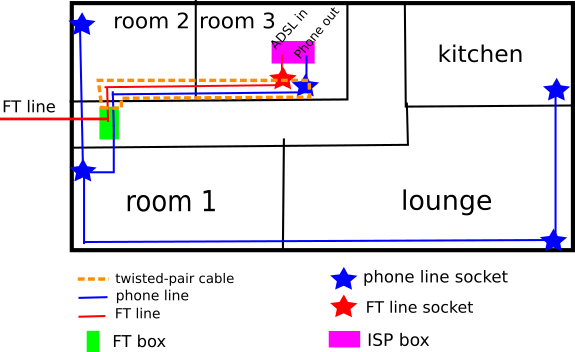 The problem is that since I did that, my noise margin dropped from 7,2dB to 5dB, CRC errors started to appear, and the download bandwidth dropped from 7,8Mbps to 5,8Mbps. If I disconnect the phone from the ISP box, it's back to normal. Also, using a phone filter on the phone socket connected to the ISP box improves the bandwidth up to 6,8Mbps.

I think there's some interferences between the phone and the ADSL line. How do I solve that?

I'm using cat6a FTP cable, do I need to connect the shielding to the ground?

Do the two wires from the phone line have to be connected on the same pair or separate pairs? Is their a norm on connecting those? (like ADSL on blue/whiteblue wires and phone on green/whitegreen wires for example)

Would I need to have two separate cables for the ADSL and phone?

After some testing I finally found the answer myself.

(colors are for french phone cables, they are different in other countries)

I soldered they directly. Maybe it would be better to use a RJ45 connector.

Now my modem is synchronized at 8,5 Mb/s. Still some CRC errors, but it's not a big problem since I can get something like 7,1Mb/s when downloading.

3
How can I trace and troubleshoot phone lines?
0
How can I determine if CAT5 cable is wired for data or phone?
0
How to properly link 2 phone cables with different diameter?
1
For phone jack, which terminals are used by modem?
0
Retrofit apartment for gigabit internet
2
Do I need an ADSL faceplate if I am not using my phone line?
0
Identify source of current in phone lines and reclaim use of phone lines?
0
Telephone wiring question
0
how to safely terminate phone cable
1
How can I run voice over existing coaxial cable?