The outside unit has a disconnect box that contains no fuse. I've double checked that the rabbits didn't somehow manage to take the connector piece out...

I've also replaced the old mercury-based thermostat with a new digital, battery-powered thermostat, which didn't help. I can hear the clicking sound it makes to turn on the AC, but nothing else happens.

It was working fine 5 days ago. I turned it off for 5 days straight, and now it won't turn on again.

I'm trying to get an HVAC pro to come and take a look, but they're booked until next week. Is there anything else I can check in the mean time?

EDIT: I'd like to open up the access control panel to check for fuse locations, but I cannot figure out how to do so. Here's a picture of what I assume to be the panel door. I've tried prying it open from all 4 sides with a flathead driver. It also doesn't slide in any direction. Any suggestion? 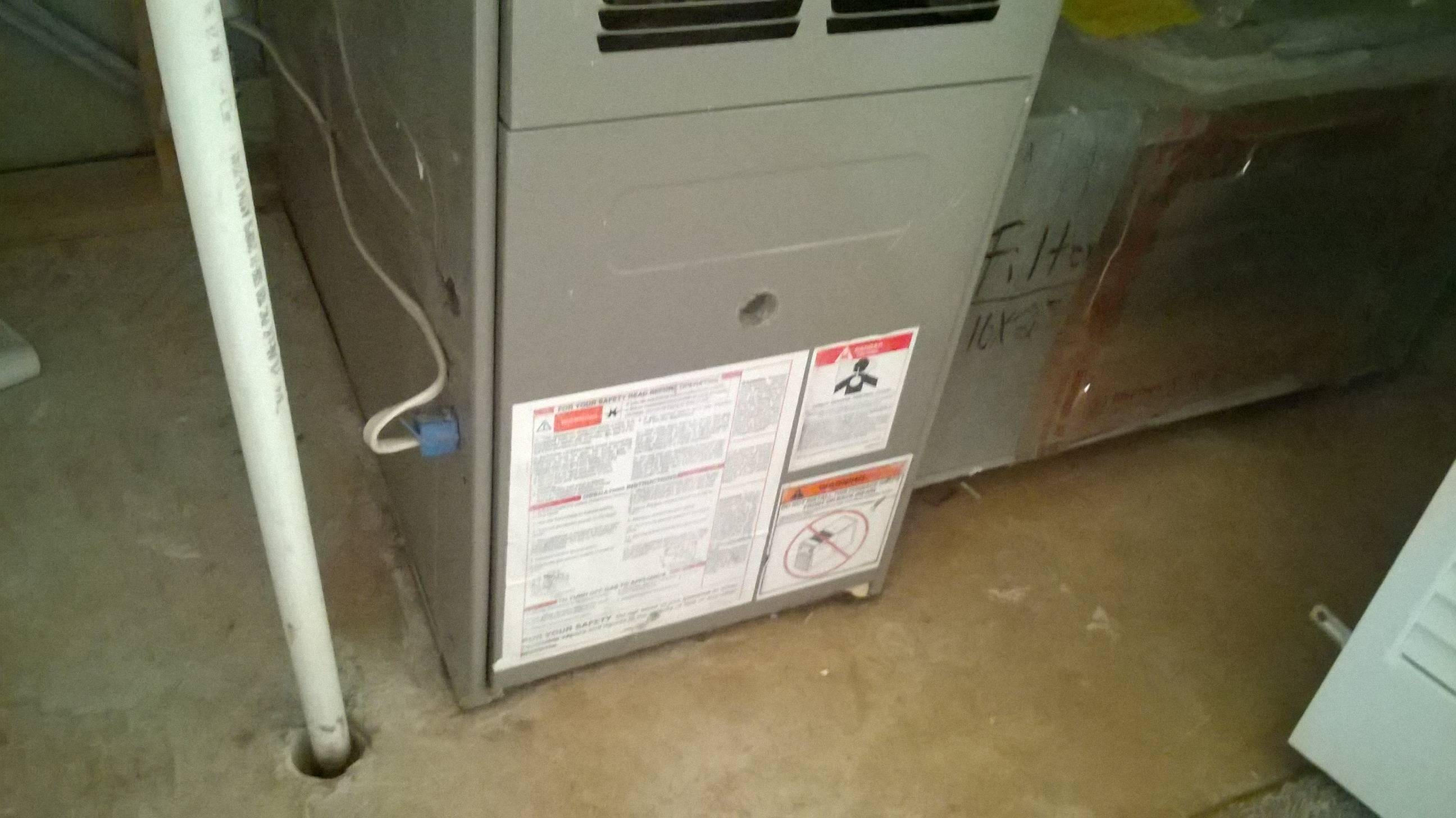 Additionally, I've verified that there is electricity in the unit. There is voltage in that the exterior white wire going from the box to the thermostat (see picture) and there's also voltage going through the disconnect box and into the outside fan unit...

I was able to take the control panel door off, and found that it's getting no electricity. As you can see in pic1, the exterior white wire is live and it goes in the little box with the black push switch to the left of the picture. However, in pic2 the three internal wires (green, white, and black) going out of the box are not live. 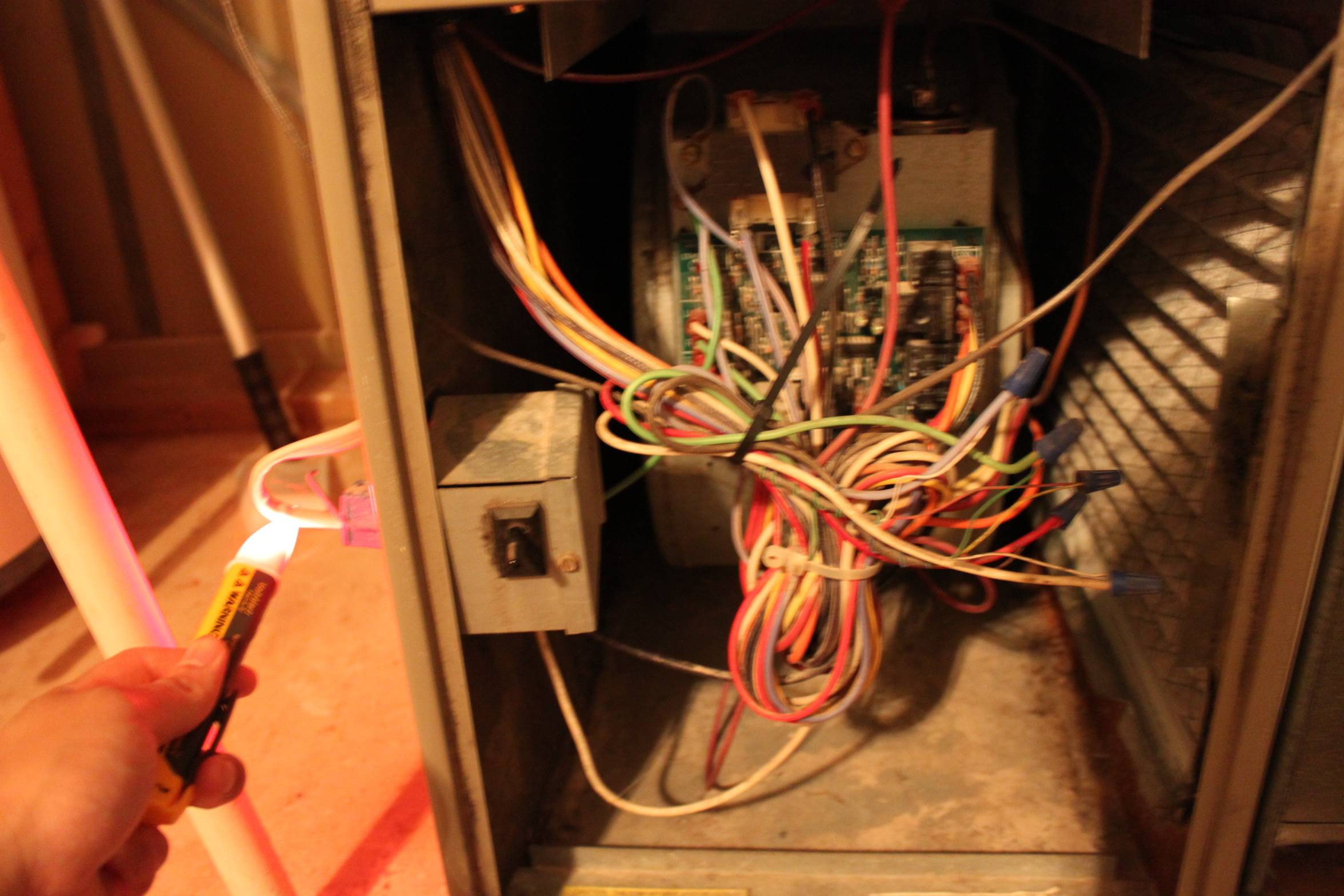 Pic2 - no electricity going out of the little box 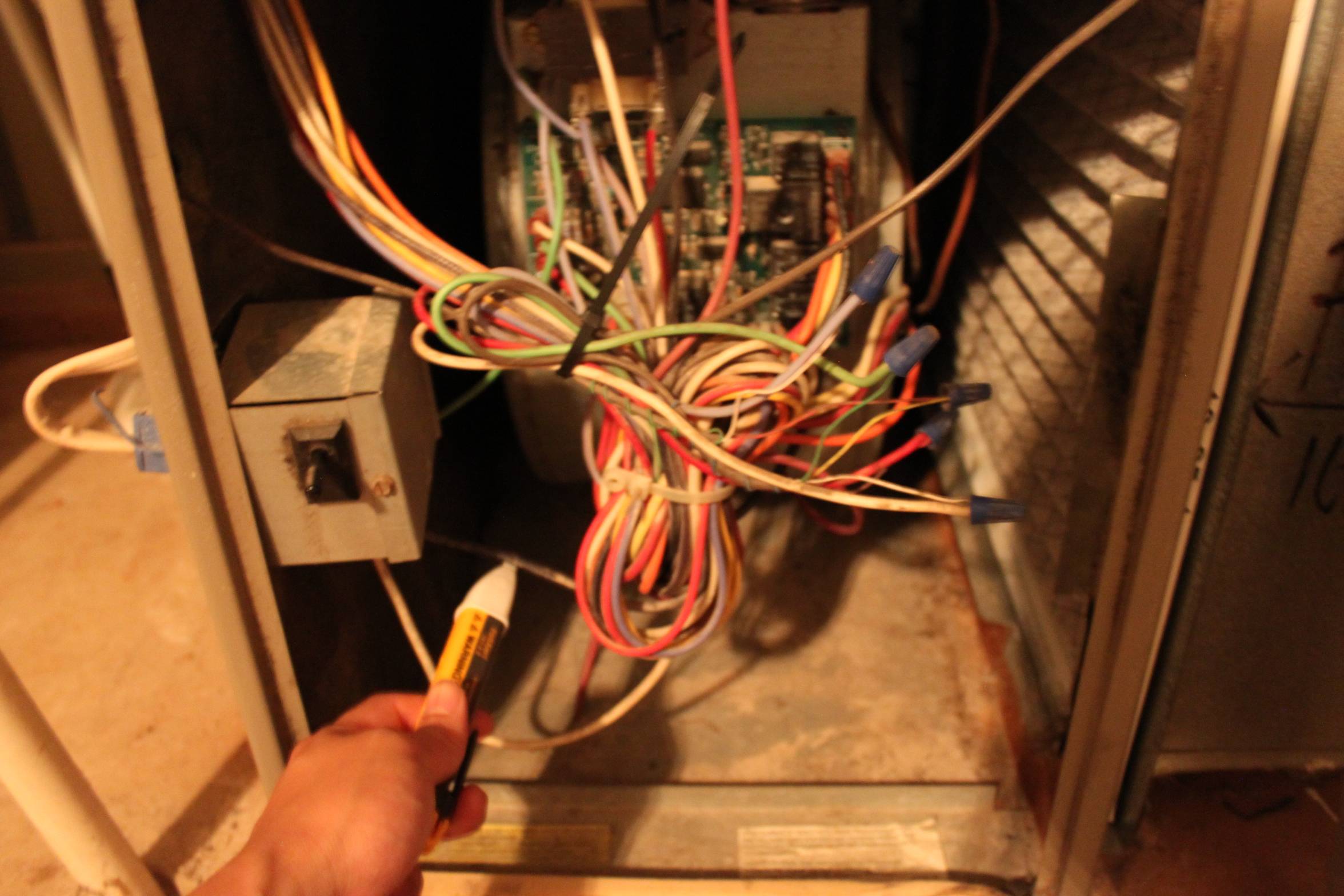 Additionally, the red status light that used to be on all the time (which I didn't recall till now) is now off. 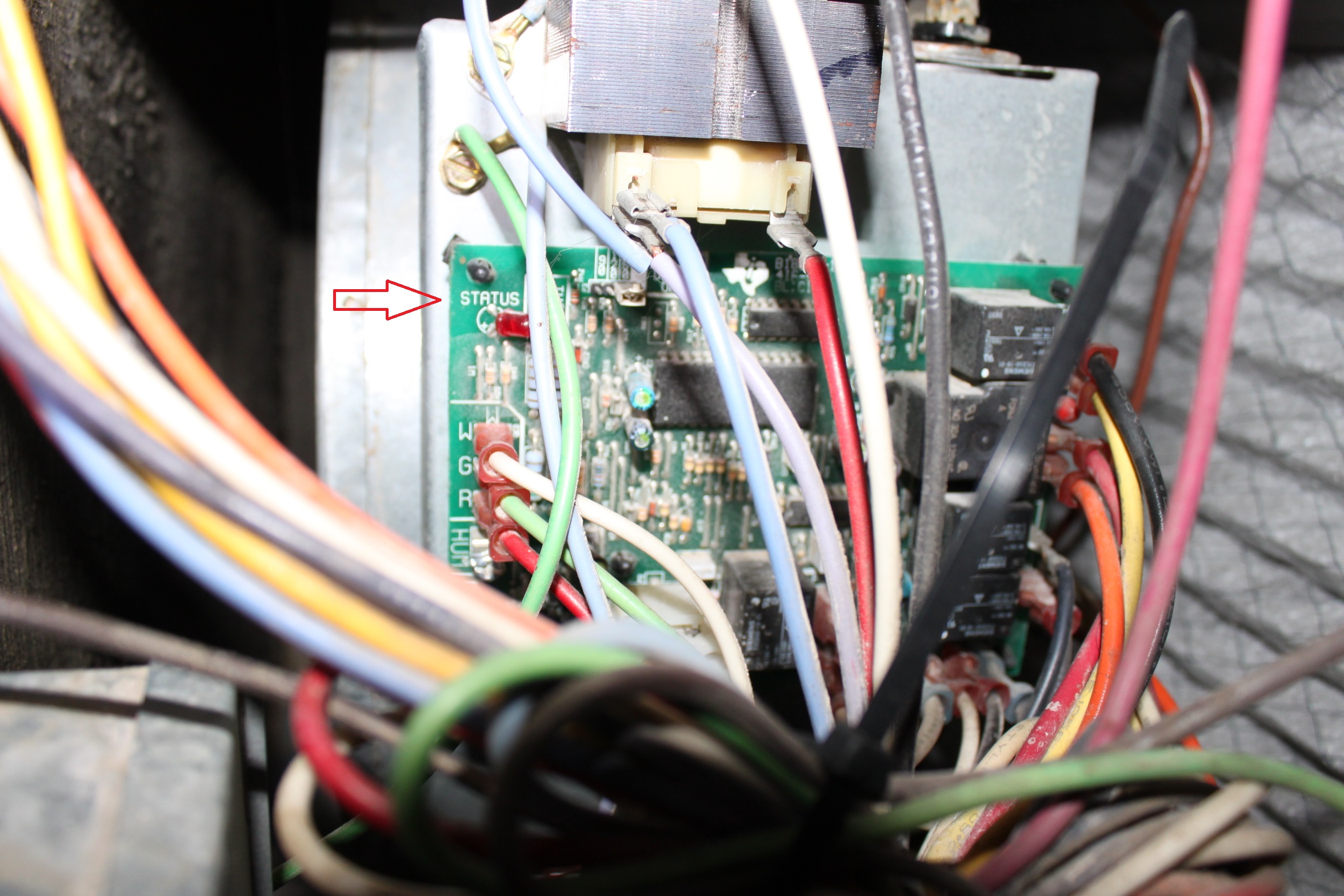 So what is this little box and could it be the cause? 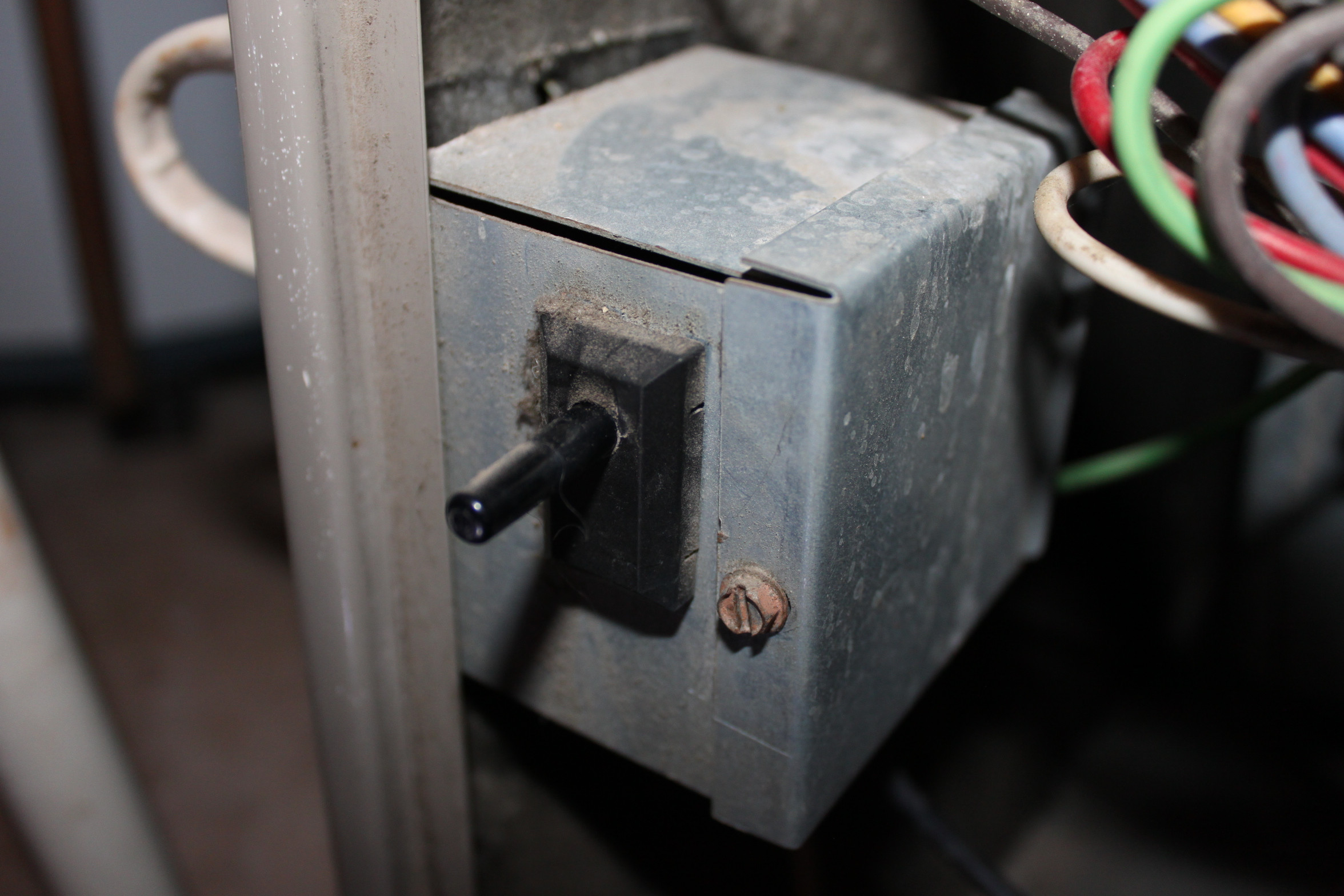 As it turns out, the box in the last picture is a safety measure which cuts the electricity when the panel door is removed. Turns out, there were a couple of screws on the outside that secure this box that were missing. Why? I did it (DOH!). I removed them a few days back when trying to open this panel door so that I can do the "G wire to C wire" switch for a new thermostat. Well, put those back and it's working now.

1
HVAC unit won't come on
4
What could be causing an A/C blower motor to turn off randomly?
1
My AC unit won't blow cold
1
blower motor only starts after I turn power to it off and back on
1
HVAC Fan set to ON position also turns on A/C unit
0
HVAC blower fan won't stop
2
How to stop Central Air unit from freezing over inside and outside
0
Run air handler fan without outside condenser coming on (continuous fan)