How to run duct work for basement dehumidifier?

Our basement is partially finished, approximately 50/50 in terms of square footage. It was used as a mother-in-law suite at some point by a previous owner.

The finished rooms are air conditioned/heated from our single central HVAC system. We also run a portable, 70 pint or so, dehumidifier in the "K" room

Our problem is that it is very humid down there and the air is pretty musty smelling. Humidity is typically 50% or greater in the summer months. In the winter, it drops to low 40s. We have white mold growing on a few items down there.

The current HVAC and dehumdifier aren't cutting it. We called in a basement/moisture company and they recommended a dedicated whole-house dehumidifier, ducted to just the basement. It was a $5k quote.

I am hands on, so I'd like to tackle this myself. I can save quite a bit of money, and it seems that the installation will be pretty simple, given that I have easy access to all the rooms.

I do not plan on integrating it with the existing HVAC ductwork. That will increase complexity and we may have an HVAC overhaul in the future.

I have attached a basic sketch of the basement and rooms. Finished rooms are BR, K and LR. There is a bath attached to the BR (not ducted, but there is a "window" to the unfinished portion of the basement.) I am planning on installing the unit in the unfinished space, near the existing HVAC. I have several ways to get the condensation out of the house from that location - pump outside, pump into washer stand pipe, pump into sewage pump.

Should my goal be to create a circular flow of air? One return in, say the K, and a supply in BR? Should the unfinished storage area have a supply or return? 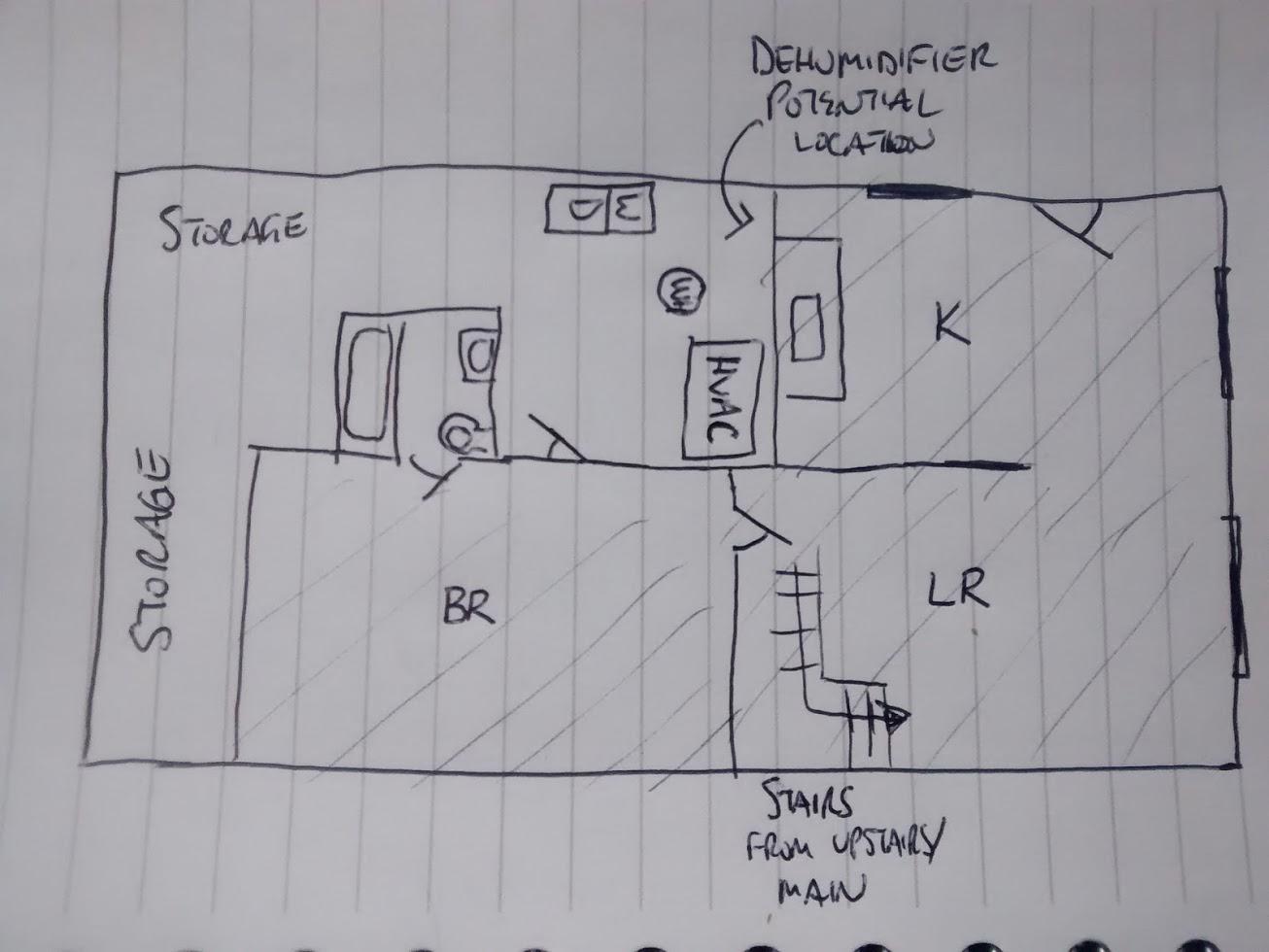 This is going to be sort of a comment, or at least not a complete answer.

When designing the system, the goal is not to create a breeze through the space. The goal is to control pressure equalization in such a way that the air is mixed and dehumidified (conditioned).

Having one large return at one end of the space, and a large return at the other may work. But it's not going to be as efficient, and will require maintaining an open area for which the air to flow (no closed doors).

Let's back up a bit, and think about how the system works...

Unfortunately, duct design is a bit of science, and a bit of art. Covering all the information you'd need to know, would be nearly impossible in this short answer format. In my opinion, duct design is not a job for an amateur. At the very least, you'll want a pro to assist in that aspect of the job.

I know I've rambled a bit, and I'm sure you don't want somebody to tell you not to do it yourself. But in my opinion, it's better to have it done right, then to have it done cheap. Aside from all that I've mentioned. It's impossible for somebody to design a duct system without knowing the equipment you're going to use, or the actual dimensions of the space. So there's no way anybody on this site could provide a duct design for you, with the information you've provided.

My advice... Get an HVAC contractor to design the system for you, then you can do the work of installing it yourself.