Dryer isn't drying clothes. I've tried all of the common solutions (I think)

My wife and I just bought our first house. I think that we discovered that our dryer vent is going to require some regular maintenance to keep it clean and able to dry our clothes.

When we moved in, we found that the vent opening in our laundry room was absolutely full of lint. I got the vacuum cleaner and sucked up as much as I could and reached up and pulled out some more. When she ran our first load of laundry though, it didn't dry much at all. I went up to the attic and looked in our vent up there and there was more lint but not as much. I picked up an attachment for my drill that I used to clean the vent and ran the brush through the entirety of the dryer vent and removed a lot more lint. I was confident that our problems were solved. However, there hasn't been a noticeable improvement.

My wife noted that when she tried running the laundry, the clothes would be steaming when she pulled them out. Our next plan is to disconnect the vent from the dryer and test to make sure air is actually coming out of the dryer. I really don't want to have to call someone to come out and look at it.

Can anyone offer any other suggestions on how to try to fix this? We don't have enough hangers to hang all of our clothes up to dry.

EDIT: I mentioned that I was going to check out the air flow from the dryer itself but its also worth noting that when I first started cleaning the dryer vent, I went to the attic while the dryer was running and when I opened up the vent and started pulling lint out, the air flow was good (I don't know how strong its supposed to be) and warm. It was strong enough that lint was blowing out. Our dryer vent is set up something like this [red is the vent]: 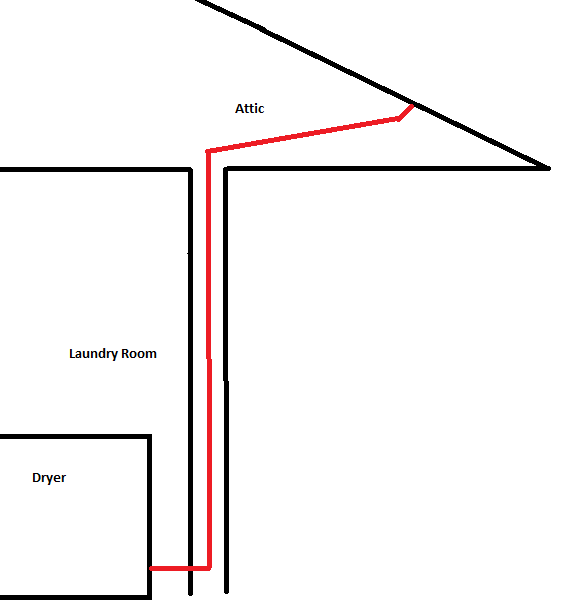 [I know my drawing skills are awesome!]

There should (must?) be a vent on the roof. If you can get up there, take the hat off of the vent and run a fishtape though the vent. (A fishtape is long, skinny, flexible steel or fiberglass rod that electricians use to run wire through conduit.) Once you've got the fishtape to the other end, tie a nylon rope to the tape and pull it through. After that, tie an appropriately-sized round vent brush to your rope. I'd also tie a rope to the other end of the brush. Now pull the brush though both ways a couple of times.

Check your roof vent for clogging on lint right at the exit.

Ideally... your dryer should terminate at the closest point outdoors.

I personally on a weekend and a bit of money, would just punch a hole through the wall and vent that way.

The longer the run of vent the more resistance the dryer has to overcome. If the tube is the ribbed tubing, that adds a lot of resistance. Pushing a column of air up a vertical pipe 12-14 feet adds resistance. All of this extra resistance reduces the overall airspeed of the dryer ergo its ability to dry.

Additionally, an uninsulated pipe full of hot, moist air in a cold/cool day through your attic space means lots of vapor condensation, which could cause water problems, mold, and collection of more lint in the vent tube; it could become a cycle. Reducing the number of penetrations in your roof is better in the long run in my opinion.

Most municipalities probably won't require a permit for this work on existing structures, I know we don't. But it is always good to look at the codes.

Not the answer you're looking for? Browse other questions tagged repair vent appliances dryer ventilation or ask your own question.

2
Can I clean my under-the-floor dryer vent?
5
Why does it take my dryer 3 hours to dry a load of clothes?
1
What is the best way to clean a dryer vent?
1
Boosting a dryer vent with an inline booster attached to the main line with a wye
3
Can I vent my dryer 'up'?
2
Dryer Vent Exhaust Fan
3
Can a dryer exhaust through PVC in a slab?
8
Dryer venting problem
2
Outside dryer vent clogs with lint
1
My dryer isn't fully exhausting to the outside?