How should I run Cat5e cable between rafters?

I've got cathedral ceilings with no attic space and 2x8 rafters. There is no space to run wiring without going through the rafters. At the moment I've got my eaves open for an unrelated problem and thought this would be a good opportunity to run some CAT5e that I want to get from one end of the house to the other. I don't want to negatively impact the structural integrity of the rafters. Is it safe to drill into the rafters? I've read that drilling in rafters ought to be done in the center of the beam, but wanted to get an opinion from someone who is experienced and familiar with building code. 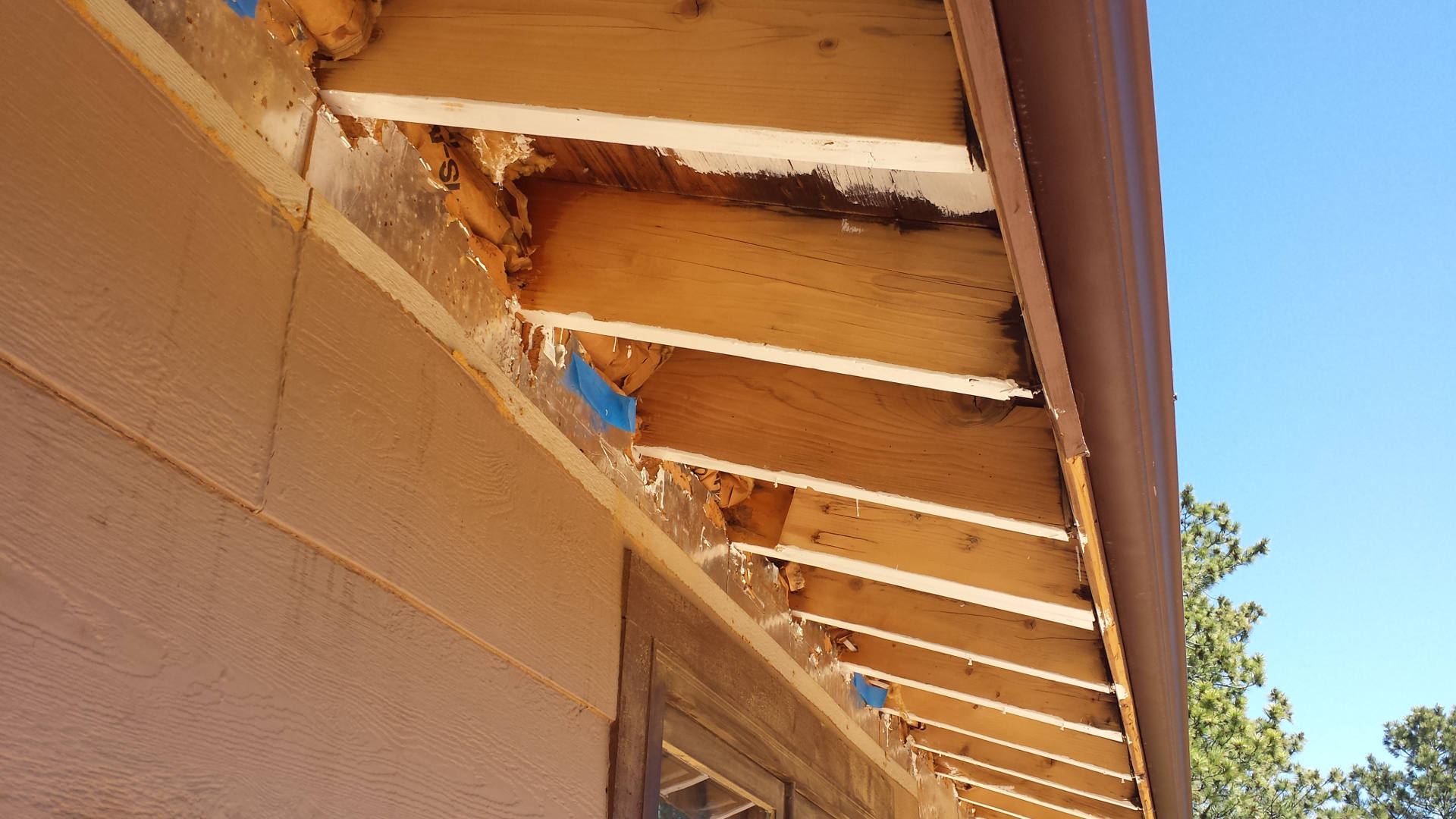 You should be fine if you're just a tiny bit careful.

You should not notch these, but careful drilling should be perfectly fine.

It's totally okay, for example, to trim the ends off of these--they aren't supporting the roof load, only supporting the overhang itself. (drilling through the trusses on the inside is another matter entirely!)

My first thought was I'd use a bit just large enough to poke the Cat5e cable through, drill exactly in the center of the top chord (the "beam") about 2/3 of the way back from the end.

In general, you don't want to drill too close to the ends of a beam (or you run the risk of it splitting). If you're only drilling a 1/8th (or so) inch hole, back away from the edge, I can't imagine this being a problem.

Or drill two small holes or one slightly larger one and pull 2 cables.

But why not consider using conduit, just for a bit of future proofing? Maybe you decide you want to pull an HDMI cable six months from now, or something else?

Hardly anybody used conduit when they pulled co-ax cable through their walls a couple of decades ago, and now you'd much rather have HDMI running through the walls. With conduit, pulling different or additional cable would be a much easier task.

You could just pull 1/2" or 3/4" EMT, or maybe you could even get away with 1" (3/4" might be just big enough to pull something with pre-attached ends like HDMI). EMT would be the most stable option.

You could run a raceway under the eave, but if it's plastic you might really be surprised at the amount of thermal expansion and contraction it will undergo as the seasons change, and you could end up with it warped and pulling away from the wall.

I would avoid the grey PVC electrical conduit because it expands and contracts to an extent you wouldn't believe and you have to use expansion couplings and leave everything loose enough (bigger holes) that it doesn't bind.

Another option might be ribbed flexible low-voltage PVC conduit (it'll typically be orange or blue).

You obviously want to pull at least Cat5e, but you might consider pulling Cat6A or even Cat7 just to be future-proof. Cat5e is fine for Gigabit Ethernet (up to 125 Megabytes per second in both directions simultaneously). Cat6A will definitely support 10Gbps Ethernet (over a Gigabyte per second), and presumably future Ethernet enhancements will be able to push even more over Cat7. Cat 6A and Cat 7 are harder to terminate, with all the shielding and the heavier jacket, but you're not talking about doing very many terminations.

What I'm really getting at is that without pulling any additional cables, especially if you pull 2 now, you can use the cable you pull as a trunk link between two Ethernet switches to transparently connect your whole house into one network, and in a home setting you will never suffer any performance problems doing that.

As far as drilling these rafter ends: If you think about a steel I beam, virtually all of the load is carried in the top and bottom plates of the beam, and the material between the plates just serves to keep them apart from each other. That's why the I beam can have all the material removed from both sides instead of being one massive solid beam. In fact the massive beam would be weaker because the top and bottom surfaces aren't really any stronger than in an I beam, but the beam would have to support many times the weight just to hold itself up.

There's less load in that vertical section of the beam the further you get from the edges, and virtually no load in the dead center. Manufactured floor joists operate on the same principle and that's why you'll see surprisingly large holes cut in the middle of those joists without it affecting the integrity of the floor (presuming the holes aren't drilled too close to the ends).

If you cut a notch in the top or bottom plate of the joist, on the other hand, you've compromised it, or ruined it. In the case of manufactured trusses and joists, the manufacturer will have very specific instructions on where you can drill, how big, how many holes, how far apart they have to be, etc.

But here, you're talking about the overhang. The structural load of the roof is resting on the wall and you could cut most of that overhang off without affecting it.

It certainly depends on the particular conditions and usage of the house, but from my experience of wiring my own home, I would rather advise to attach some sort of cabling tray and cover to the wall right under rafters, which would run the length of the wall and would have space for more cables, which might be needed in future.

As you know Base-T cabling uses star configurations. If you would eventually need another cable to another place, unless you have a cabling tray, you would need to either to put a switch at one end of the cabling ($$$), or drill another hole in the rafters.

Not the answer you're looking for? Browse other questions tagged wiring structural or ask your own question.

1
How far apart should I space rafters for a 13ft patio?
2
Run cat5e/coax parallel to power conduit
1
Should I run cable through pipe?
0
Run electrical wire outside in for new lightings for cathedral ceiling
1
Strengthening existing 2x4 joists to create a mini attic
3
Running NM Cable In Attic Along Rafters