I bought an UK shower while doing my refurbishment of the flat in Latvia. Unfortunately, only after the tiles and pipes were installed the plumber told us that the UK shower "doesn't fit".

This is quite annoying as you can imagine. Does anyone know if it's possible to get some kind of converter that would fix this? I would prefer to keep the existing shower if possible. I am looking for something that will connect to the existing pipe and make the connector to shower of the correct diameter. Is it possible at all and how difficult is to do such a thing? Would it leave us with ugly 5cm converter sticking out from the wall?

Here is the current temporary shower: 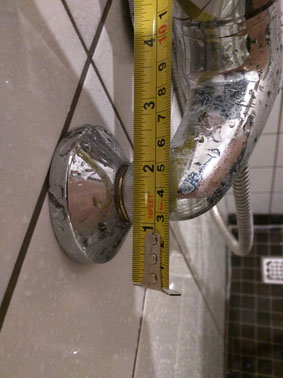 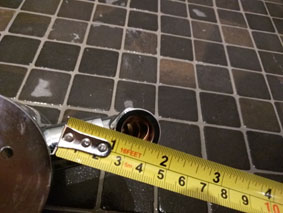 And its inside (note the ring inside): 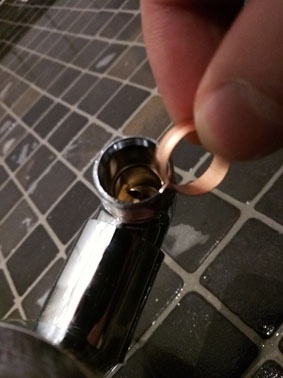 What would be the most reasonable solution in this case? Is making a converter possible in a way that would not be visible? Or perhaps we should simply return the entire shower and buy a new one?

It's very difficult to tell what your existing pipe is like, as there's a shower attached to it. However, I think your problem is that the existing pipe diameter is larger than the UK shower connection? In which case you need a reducing coupler.

Here's an example. But a) your existing pipe may be 1" rather than 22mm; and b) the fitting at the larger diameter end may not be suitable. However, if it were that simple, then your plumber should have been able to do it. So I suspect problem a). I'm sure somewhere must sell imperial to metric reducing couplers, but I haven't looked.

With regards to having an ugly converter sticking out the wall - your other option is to have the converter behind the tiles. This requires either 1) breaking out the tiles, then retiling a small area afterwards; or 2) coming at the wall from the other side (in which case you'd then need to replaster the other side of that wall). I personally did 2 when installing a new shower, as the tiles were installed by the previous owner, so I didn't have any spares, but it had been done recently so I didn't want to retile the whole bathroom. Option 1 shouldn't be too difficult, as you say you have retiled, so you should have access to identical replacement tiles.

Not the answer you're looking for? Browse other questions tagged plumbing shower pipe or ask your own question.

2
How to install shower 'S' pipe
2
How to get rid of this sulfur problem
2
Possible causes for sound of water running through house pipes when water is off?
0
How to disconnect shower tray from drainage pipe?
3
Options to fix an old leaky shower valve
2
Is it acceptable to use multiple PVC couplings when routing a drain through joists?
1
Abrasion on shower head pipe — must replace?
1
Why won't a 5/8" compression fitting with a ferrule integrated in the nut fit onto 1/2” copper pipe?
0
Am I using the correct ABS fittings in my final design?