I decided that I want to replace my windows, and figured I'd start with a small bathroom window downstairs. I build wooden furniture as a hobby, but have very little experience doing construction/carpentry.

So before I even start I want to just remove some trim and see what I'm working with and if I can identify the jamb, etc. For the most part every window consists of aluminum strips mounted to the jamb, with the sashes riding in the strips. Then there is a strip mounted to the outside of the jamb with storm windows mounted to this strip.

I removed the inside trim and saw that there's a storm window mounted to a strip installed in the frame. So I went outside and pull the screws out from all around the storm window, cut some caulk that might have been installed when the put vinyl siding on the house, and assumed that it would pop right out. The thing didn't budge. When I look back on the inside I see that it looks like construction adhesive (not caulk) holding the window to the strip.

The screws holding the storm window were mostly stripped, so I'm thinking at some point someone glued them in.

I can break the adhesive on the bottom and get it to move, but I can get access to the top of the storm window.

Does this assessment that they've glued the storm window in seem correct - shouldn't it just pop right out when I remove the screws? Or is there something else holding it in?

Finally, should I remove this flashing first? I don't want to bend it up getting in there to remove old windows, but I don't want to remove it if it does not go back on easily. I can see where it is nailed on - it was installed when we had vinyl siding done about 5 years ago. There's some caulk around it too.

Ultimately, I think I'm going to have to destroy the storm window to get it out, but I want to have a replacement ready to go in case I break the regular window. The measurements look to be 24" by 33 1/2" - you can actually see in one of the photos someone wrote "33 1/4". It's just weird because it almost looks like the windows were kind of put together on site or something.

I've found a couple other storm windows which are glued on - you can see in each case the strip which I believe is supposed to hold them is mostly rotted away, so I'm guess that's why they glued. Luckily, most are not glued.

Any other advice on this situation would be greatly appreciated! 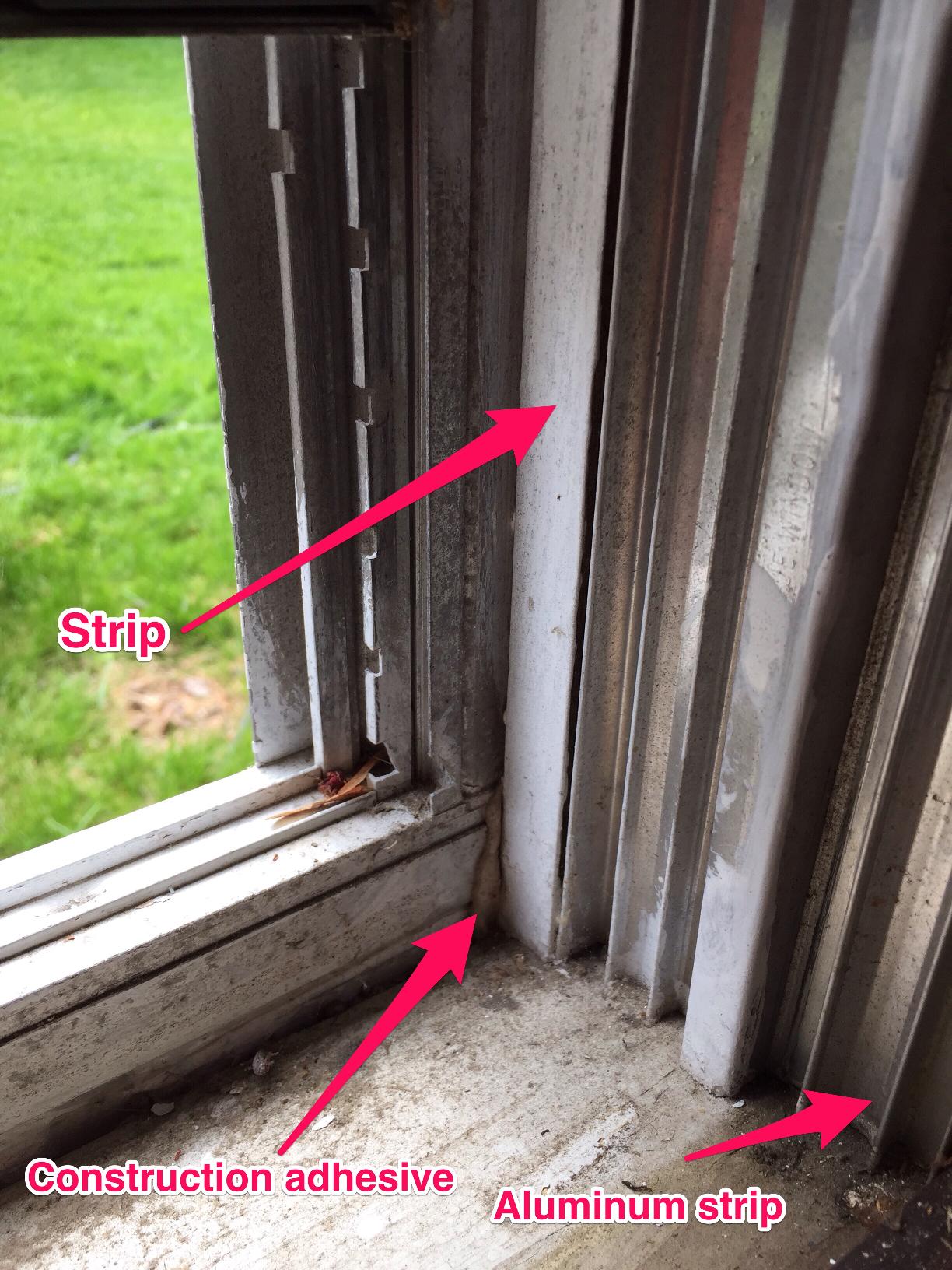 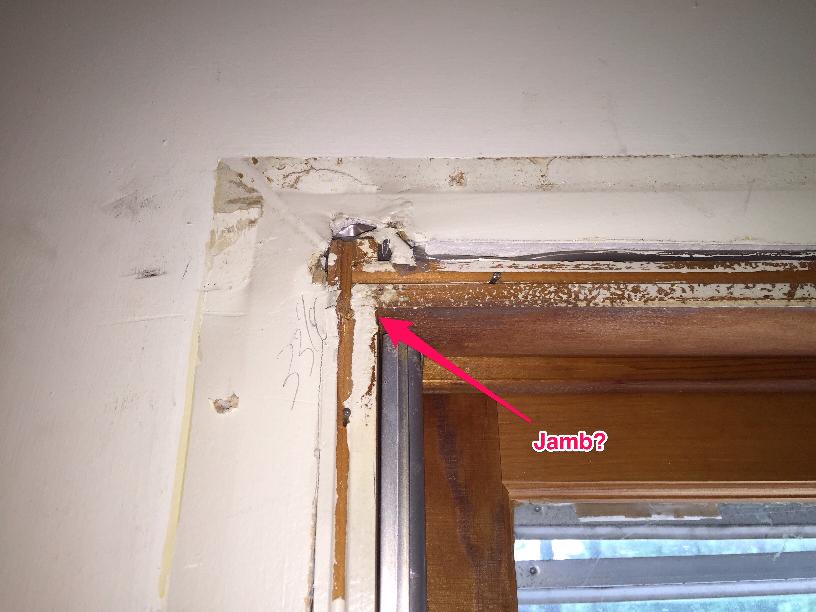 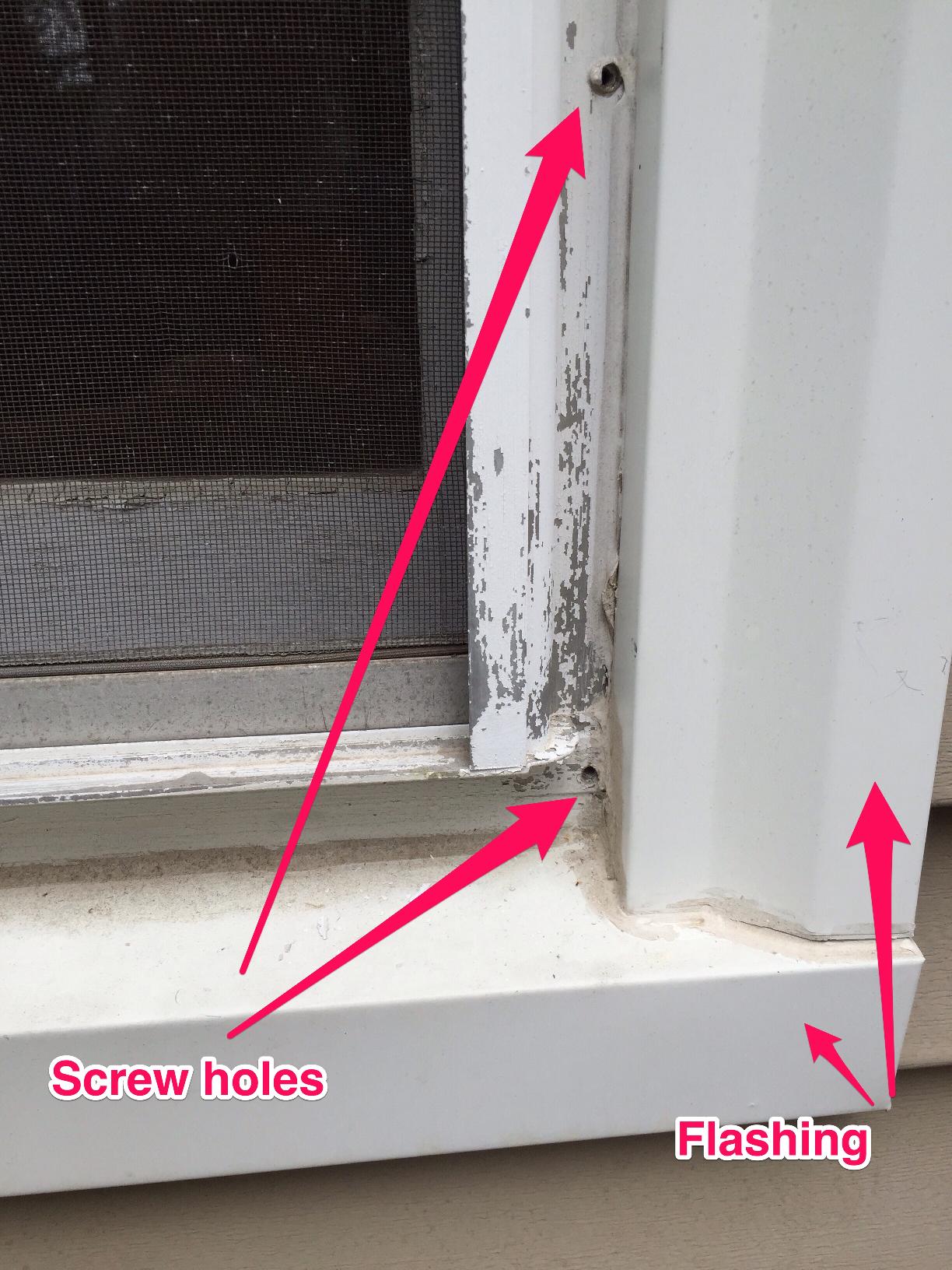 The pictures you added, were edited with info to help you decide which way you want to go. 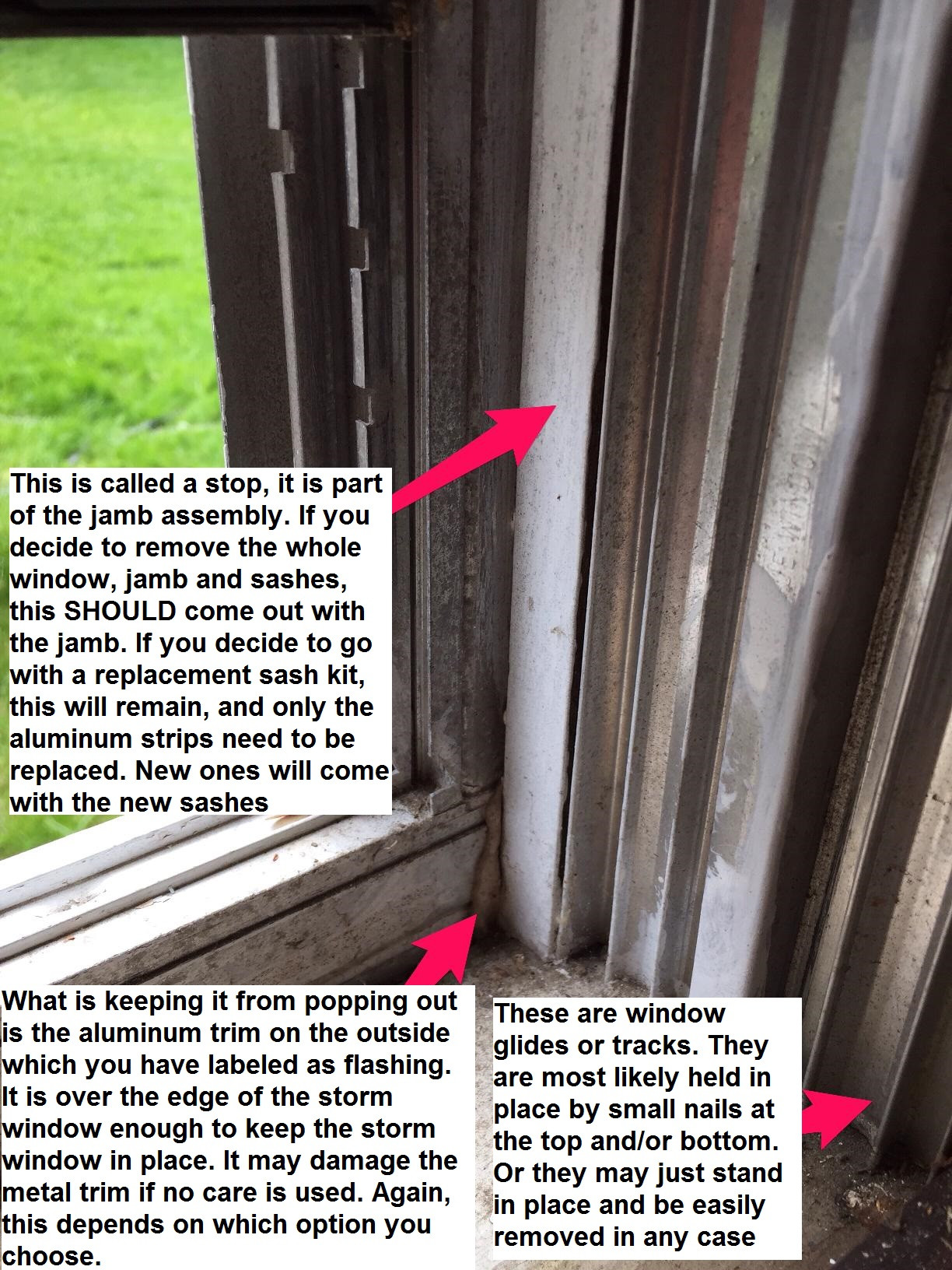 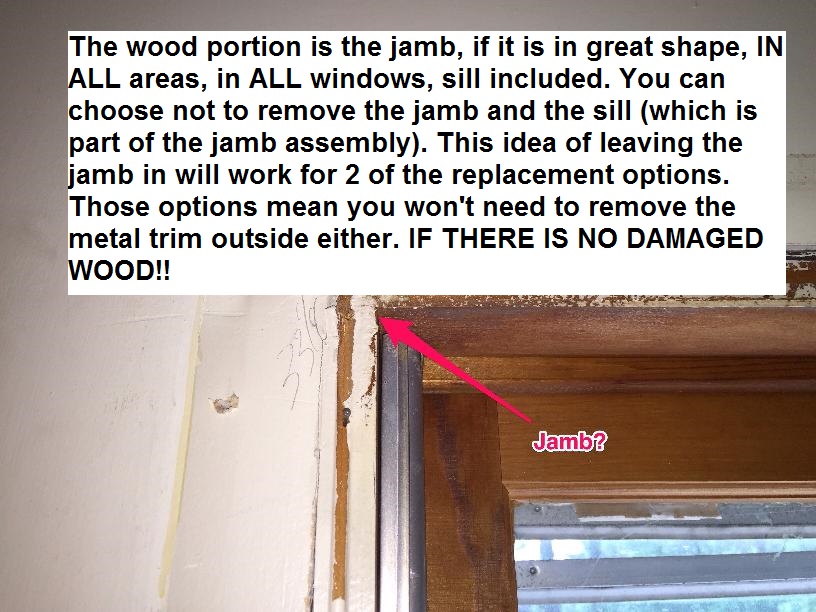 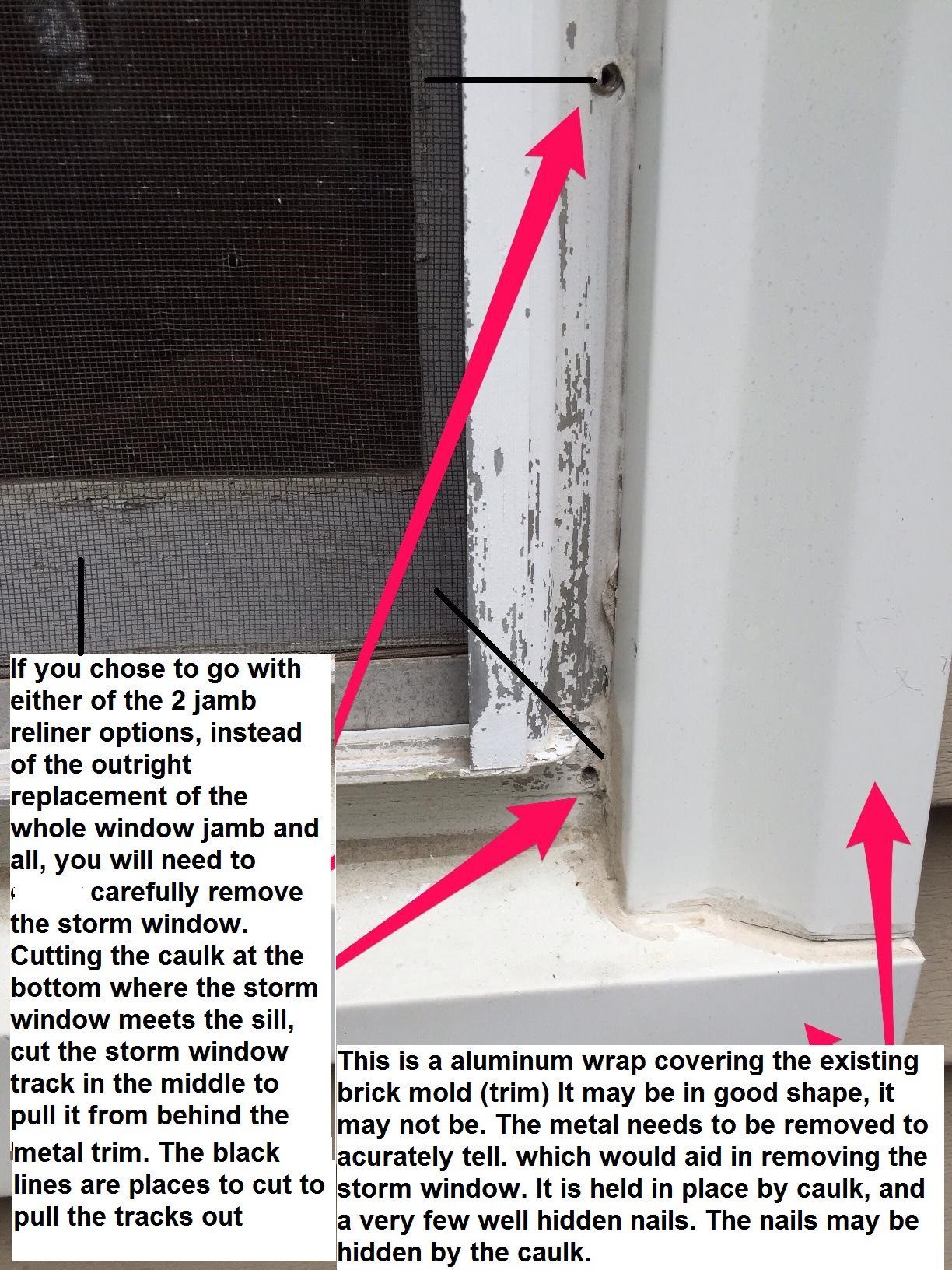 There are 3 options to choose

1) Out right replacement of the whole window sash and all.

2) Renovation kit with sash and jamb. These fit a new jamb with sash directly into the existing jamb, saving the existing trim and labor removing the jamb and trim. You only need to remove the sash and track.

3) Use a jamb reliner kit

2
What type of window is this and how can I remove it with minimal damage to the wall?
0
Fixing poor caulk job at aluminum siding and window trim
4
Help understanding Window anatomy
1
Window Replacement
4
How to remove window with minimum damage to outside trim
3
New replacement windows: what happens when I change thickness of exterior siding?
1
Install exterior window trim without puncturing nailing fins
0
How do I remove window sill stop block on double-hung vinyl window?