Should I be switching just the hot, or both hot and neutral? 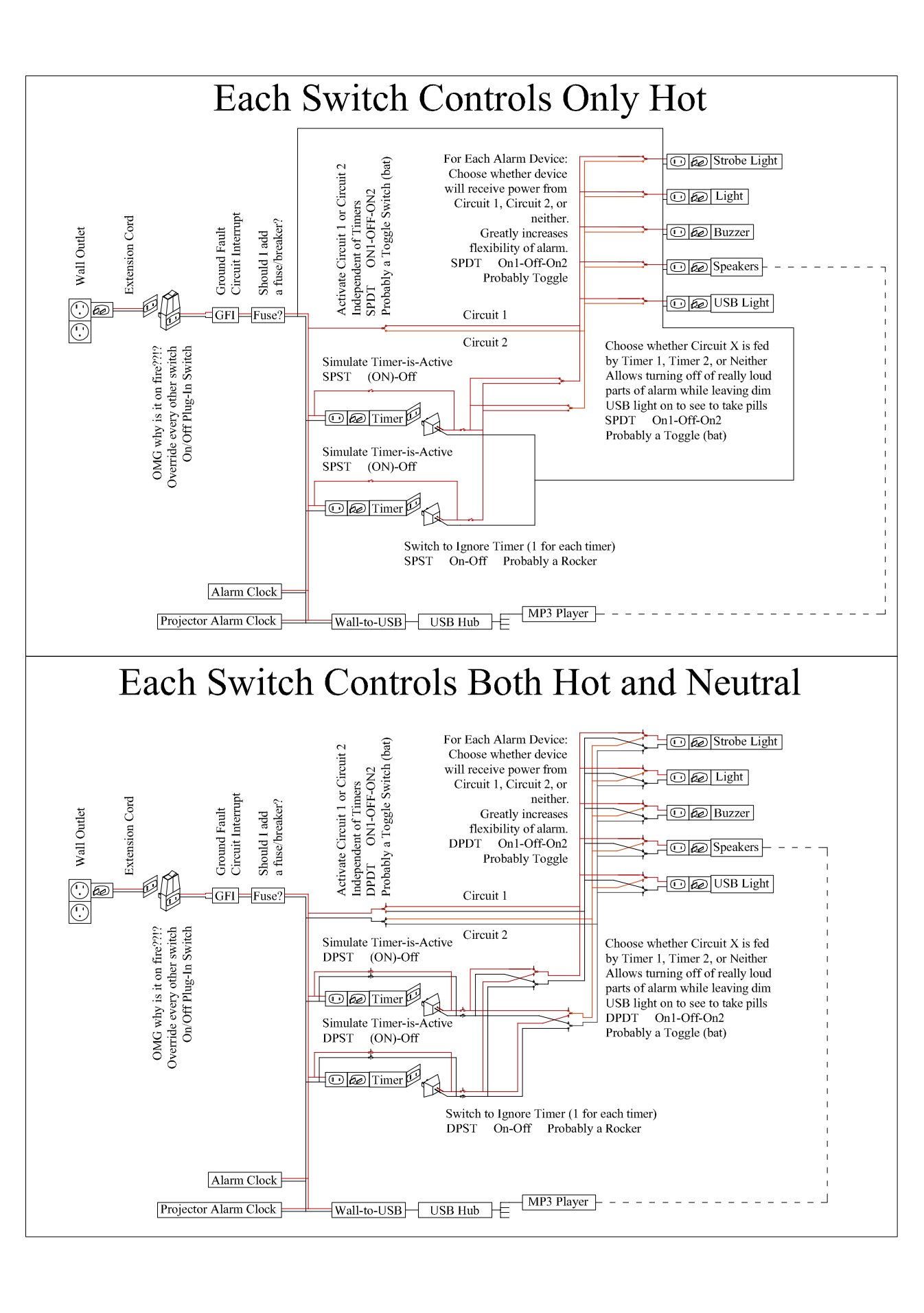 I'm thinking of building my own alarm clock because none of the one's I've found are meeting my needs, and because it's kind of fun. I am a bit out of my depth on at least on part though, and I want to make certain I don't do something unsafe. I'm not sure whether or not I can use a common neutral line for two circuits. There are two diagrams I'll try to attach to this post that should explain the two options I'm looking at. Finding double-pole switches is a little more difficult than single-pole, and a bit more wiring (not much of a problem for wiring though).

I'm kind of worried about a neutral line being shared because if one alarm device is activated, all the neutral returns will be 'returning' (for lack of certainty of a term to use). Since multiple devices could (and probably would in some circumstances) be plugged in to outlets that have 'returning' neutral lines and share a common but unheated hot line. Might the current be driven backwards through a device in this scenario (ie, Each Switch Controls Only Hot, Timer-less Feed Open, Timer 2 Open, Timer 1 Closed, Circuit 1 fed by Timer 1, Circuit 2 fed by timer 2).

Is there a great danger in having a store-bought wall timer plugged in but with the neutral and possible sometimes the hot wire both 'returning' and hot due to the devices they're connected to receiving power from the other timer or from the timerless-activation switch?

Also, is there something I missed with my design in terms of safety or functionality (or sanity)?

Is there such thing as an anti-backflow device for AC? Or for DC for that matter?

Explanation of the system:

This is what Timer 1 is for. The night before I will set Timer 1 to the desired time, and will set Circuits 1 and 2 to be fed by Timer 1.

The loud obnoxious items will be set to Circuit 1. The USB light will be set to Circuit 2. When the alarm goes off, I will make my way across by bedroom to quickly switch Circuit 1's feed from Timer 1 to Timer 2. Since Timer 2 is neither on nor is the switch for Timer 2 connected to bother Circuit 1 and Circuit 2 at the same time (... unlike a previous design iteration...), Circuit 1 will no longer be being fed power, and thus the obnoxious items will stop making me want to perform ungodly acts of destruction upon them.

This is what the second timer is for. Circuits 1 and 2 will have been set to be fed by Timer 2 when I got up for Timer 1, and so when timer 2 goes off, so does the alarm again.

This is what the Momentary-On switch before each timer is for (I press it and it closes the circuit as though the timer had gone off).

This is accomplished by a switch.

Orision, My take on this is that you understand what you want pretty well, and understand electricity only at a very surface level. That's not a great mix.

If each of the items you are turning on and off were controlled by home-automation switches, and if you were to have a number of separate simple controller switches for each of the modes you describe above, you could accomplish your aims with no actual electrical knowledge. You would just have to become somewhat proficient at setting up and configuring whatever home automation system you decided to work with.

Probably a bit more expensive this way...but much safer.

There's a lot going on here, and I think we could spend a lot of time drawing out the threads of this design and implementation; however, to answer your specific questions:

Functionality and sanity: There are a lot of design and construction details involved in such a device that aren't immediately obvious and may not be an issue for some time which could, nevertheless, kill you or burn down your house. Examples include: fusing (yes, absolutely it should be fused, with a fuse which will protect the wiring and switches in the device), insulation of wire connections, attachment (are you soldering these together?), wire size, power supply. Power supply? Are all of these devices 120V, or do you need a DC power supply for some of them? My advice would be to do some careful research on how these things are done before attempting to undertake such an adventure.

One thing you may consider is to use a plug-in DC power supply, the venerable black boxes you plug in to charge just about everything in your house. These can be obtained at many different voltages and current delivering abilities, and are way, way safer than trying to mess with a 120V, unregulated supply from the wall. Just keep in mind that a ground fault can set a fire at 12V just as fast as it can at 120V.

You only have to switch the Hot side.

You may also want to tone down this whole idea. The clock on any cheap Android tablet can be set for several alarms, with different loud (some obnoxious), sounds at any set time (with great time accuracy). And they can be set daily, for set days (Mon, Weds & Fri), weekly and to repeat. There are also "home automation" devices that an Android device (phone / tablet) can control. Set one alarm to flash lights and ring a bell, and another alarm to do whatever else you'd like - and control it easily from your phone.

Tone it down even more and use a medication / pill reminder app, like this or others and you may not wake the neighbors, but it'd sure be a lot easier.

The question is a bit long for me to follow fully but I will say that on a 120V circuit you are not aloud to switch the neutral. It is a code rule. You always switch the hot, never the neutral. I am not sure if your whole circuit is 120V but theres a part answer for you.

You only switch the hot side but why not just buy a arduino with a relay sheild and have all that and wifi controlled lights?

1
Light switch timer for outside lights
1
Single light switch to programmable - 2nd hot line?
0
How can I make 5 lights work with 2 switches and one light common to both?
1
Wiring timer switch into 2-gang switch setup with common load (red) with downstream load
4
Extending power from existing three-way switch circuit
0
Installing an "In-Wall" Light Timer, But it calls for"Load", "Hot", and "Neutral"
3
Legal/safe? Neutral in box goes to different panel than the one that provides the hot
6
Can the neutral and hot be split like this?