I have an old 3 phase panel next to a separate single phase 100 amp panel that is being used by one residence. This space has been used as a carpenter shop and an office in the past. Now it is being divided into two residences and I want to use the 3 phase panel for one of the residences by installing a single phase 120/240 subpanel. The place that I will need to install the subpanel is in the same building but it is about 60 ft away from the three phase panel. The 3 phase panel is powered by three #6 wires from the pole and there is no main breaker in this panel. I believe the system is Delta and two legs are 120 and one is 208. The questions are:

ThreePhaseEel has asked me a couple of questions. First, I want to thank him for the answer. As to the color of the 3 phase wires from the pole, all are green. I don't see any white either. The high leg is the first wire from left in the box that is 208v. The second and third are 120v. So I think instead of A-B-C I have B-A-C. In the box the color of Bus bar C has been painted red but the voltage of this bar is 120. The voltages that you are showing are correct.

What should I do when I don’t see white neutral coming from pole to 3phase panel? Is it possible there is only one neutral for both single and 3 phase panels? Can I use the neutral in single phase to connect to the single-phase 60-amp panel that is from 3 phase panel? How can you distinguish #6 PE from XLPE?

What is this balancing issue warning that some people are talking about when you want to install a single phase sub-panel of a 3 phase panel? Is it OK to have 60 amp breaker as feeder and as main sub-panel? Which one will trip first if there is a short?

Finally a question about conduit. Can I use two 1.5” 90 degree elbows (like S shape) connected to each other?

First things first: do you see any orange wires, or wires with orange tape on them? If so, you definitely have what is known as a "high leg" or "wild leg" delta system -- based on your voltages, I believe you have this, which was used historically to supply both 3 phase 240VAC and 1 phase 240/120VAC to mixed occupancies, as in the illustration below (courtesy Wikipedia/Gargoyle888): 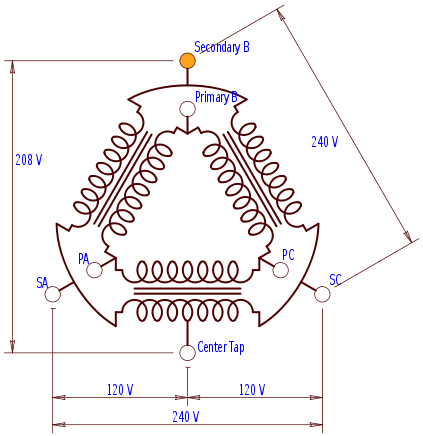 In this system, the secondary center tap forms the split-phase neutral, with the A and C phases as the normal 120V "hot" legs in the derived split-phase supply, and the "high" or "wild" leg, while normally the B phase (this is from 408.3(E)(1) in the NEC, by the way) sits unused as it has 208V to the neutral on it.

Now that that's explained, to answer your questions in turn:

Finally, keep in mind that 60A is a very limited amount of current for a single dwelling unit. It can be managed, though, if you are able to run the heavy single loads (dryer, range/stove, hot water, and HVAC) using whatever fuel gas supply is plumbed to the building instead of using electric heavy-load appliances, or if the heavy loads for that dwelling unit are run directly from the three-phase supply -- although in some high leg services, the B phase is limited to a small fraction of the total load, which can make this infeasible.

Is there a reason the utility won't simply replace the obsolete high leg delta service with either a 240/120V split phase or a 208Y/120V three phase wye service?

Addressing the conduit problem, the neutral, and the balancing issue: