Is having a branch off the end of main heating HVAC duct bad and if so, why?

Question: Is having a branch off the end of main heating HVAC duct bad and if so, why?

Background: A heating and cooling contractor sales representative came to my home today. He saw the situation pictured below and said that having a branch off of the end of the main heating duct is bad because it does not allow the main branch to maintain pressure.

I presently fail to see how a branch off the end compared to the same sized branch off the sides (recommended by the sales representative) of the HVAC would make any difference in the performance of the system. I would like to understand the physics behind why this is bad before I pay to have it corrected. 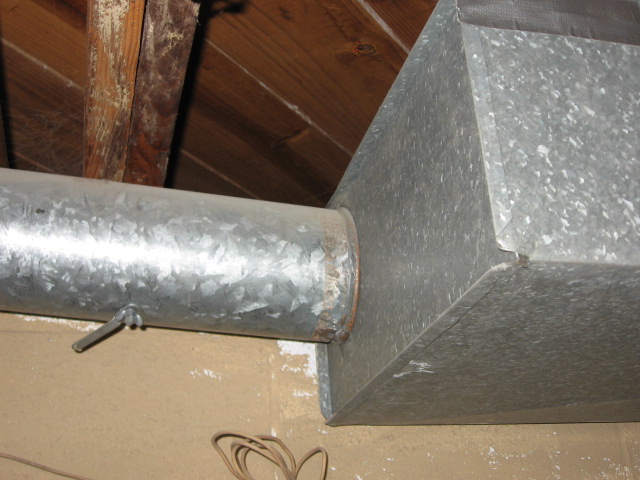 I don't believe the position makes any difference. The pressure in the main duct, for all practical purposes, is uniform. There is a slight loss at each exit duct along the main duct, but the original main duct should have been designed to handle this. However, if you added the duct to the end of an existing system, and the duct is comparatively too large-you can effect the air flow of the entire system. Velocity changes with the duct size.

You can actually visualize this by taking two styrofoam cups and poking holes in them. Take one cup and put a hole about an inch up on each side. On the other cup, put one hole in the side and the same size hole in the bottom. If you pour the same amount of water in both of them, you'll get even amounts coming from the side holes in the cup without the hole on the bottom, but uneven amounts from the cup with the hole in the bottom. Exact same thing with a plenum, except in the direction of the airflow instead of the direction of gravity.

3
It is reasonable to expect a contractor to replace the last foot of HVAC duct work, the connection between the insulated duct and the register?
5
Can I reroute this air duct?
0
Would increasing the size of the A/C duct for my kitchen improve cooling?
2
Will a 2-stage heat pump cool my upstairs on low stage?
1
HVAC heating and cooling circuits
1
Air handler turns on even when set temp is reached
1
Generac Generator with Carrier Infinity Heat Pumps
0
What are these lines called (on an air duct end) and how do you rebuild them if you cut the end of the duct?