My house was built in 1974. I have doubts the wiring has changed since then (aluminum everywhere) and have already noticed some bad things (downstairs potlights on same breaker as upstairs living room!?!?)

I bought some tamper/USB sockets to install in my bedroom, two to be exact. I installed the first one with success. Then I proceeded to remove the second outlet, to replace it, and noticed it was a split receptacle (at least I thought). It was a 3 prong, and had two hot and two neutral connections. I figured someone just put this on two circuits for some reason, so I decided to just use one.

So I safely marretted one neutral and one hot (not together of course!) which appeared to be coming from the same sheath, and used the other two for the new receptacle. I flipped on the breaker and not only did the new receptacle not turn on, but the other one I had just installed was now off.

This lead me to believe that the second receptacle was daisy-chained off the first one. But it was really confusing. I then discovered some stuff and having gone from electrical college to programming, I forget what is good and bad here, but I am sure there is a lot of bad. 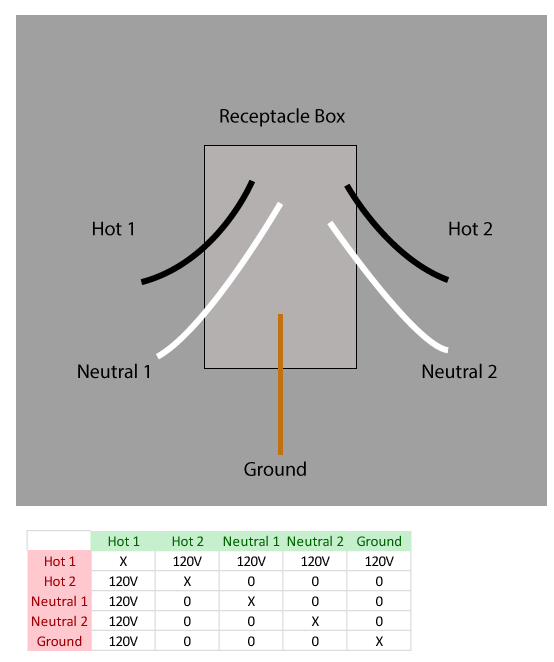 My Neutral 1 is also shorted to ground.

These are all confirmed via my DVM. What do I do? I googled this and someone said

Hot1 and Neutral1 are the feed from the panel. Hot2 and Neutral2 feed the next receptacle in the chain.

Depending on the new receptacle you're installing, you should wire it the same as the old receptacle.

As for the ground. It's odd that there's only one grounding wire. Where does it come from, one of the cables, the box, somewhere else? In any case, the bare grounding conductor should not be connected to the grounded (neutral) conductor.

What country are you in? Are you sure you're not reading 240V (more or less) between Hot1 and Hot2?

If you do not have an independent (typically bare copper) ground wire in the box, and the ground terminals on your receptacles are just pig-tailed to the neutrals, then you should either disconnect the pigtail and install GFCI receptacles (labeled with "GFCI protected, no equipment ground"), or pull new cable with a ground wire. At best, your neutral wire is insufficiently sized for this. But you also effectively have no ground... If you get a fault in the neutral, then you have no return path for the ground either, even if your circuit feeds out of a main service panel where the neutral and grounding buses are bonded together.

Not the answer you're looking for? Browse other questions tagged wiring grounding socket or ask your own question.