I am having the same problem as others water coming out of shower head but only when the valve is in the neutral position to fill the tub. I have removed the spout to expose the copper nipple I have replaced the cartridge also removed the showerhead. however I still have a small amount of water coming out of the shower head when filling the tub in a neutral position when running hot or cold water it will not leak. I ran copper to the spout and shower head any suggestions if I had done anything wrong in the set up.

plumbing bathroom
Share
Improve this question
edited May 4, 2015 at 6:06

The problem is that the "back pressure" at the tub spout is too high. Remove the tub spout and check/remove any debris. If there is no debris in the pipe or spout, then there are a couple solutions for this. Adding a water flow restrictor to the pipe that runs up to the shower head might work. This would require cutting into the wall, though. But I believe that the better solution (in my humble opinion) is to raise the height of the pipe that goes to the shower head, because it involves no painting. Plumbing is all about gravity and pressure. If the pipe going up to the shower head is high enough, the evil back pressure from the tub spout will not be able to push the water to the top of the pipe, to overflow to the shower head. Adding a couple feet of pipe (into the attic maybe) might not require cutting dry wall, provided that you can cut through the top plate of the wall and reach and remove the FIP adapter (or drop ear fitting). You will first need to unscrew/remove the shower arm and probabaly use a stubby screw driver and small pipe cutter to detach the adapter or fitting. You will then need (in a difficult to reach area) to use a "sharkbite" coupling to add and extend the pipe. Add as much vertical pipe as necessary; generally, a few feet should do the trick. If you want to be sure it is high enough, have a helper turn on the water (after you have connected the extension). It should not overflow. Connect two elbows with a 2.5 inch nipple, to form a "U" shape. Attach the FIP or drop ear to a length of pipe- the same length as the extension pipe that is now connected to the "sharkbite" (minus the added length from the "sharkbite"). Finish connecting the pipes so that you form a "loop", up then down to the hole for the shower arm. Reattach your shower arm. Use 2x4s to build a support bracket for the loop and be sure to support the missing chunk of top plate (top of the wall). 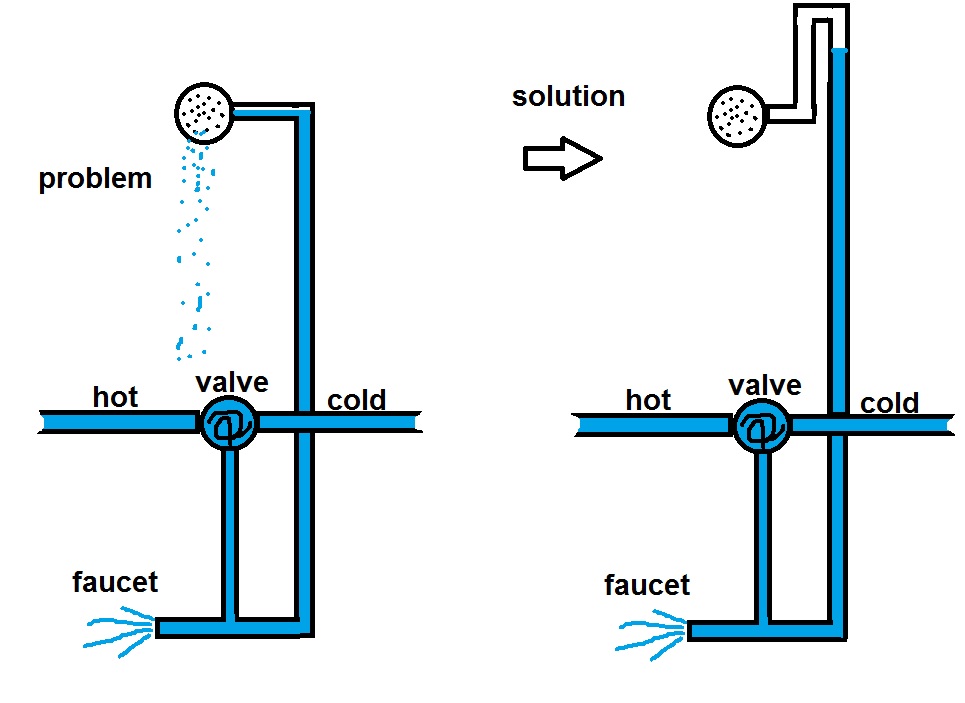 found this forum when trying to install a Moen INS2153C tub/shower valve, and experiencing "stacking", or flows from the shower head while the tub fill is running at maximum. My distance from the valve to the shower arm was the prescribed 46", the valve was installed proper side up/down, and the lines had been flushed prior to hookup.

IMHO, the Engineering of valve assemblies like this one (any that rely on blocking the flow at the tub spout to activate diversion of the water to the shower arm), should be re-thought, given the popularity and ease of use of Pex.

My solution was to purchase one of the newer design shower panels, which require only a single standard Hot stub and a single standard Cold stub. I brought those out of the 4.5" circle I had cut for the Moen valve. These new models have the same type of connection as a sink tap, dead simple. Upside: 1) Nicer functionality (because the show panel has more choices of water flow; 2) No need to break into the wall and undo existing work; and 3) I finally understand why they say to use copper to the tub spout. IMHO this is a restriction that could be eliminated if the mixing valve manufacturers would re-think the existing design in light of popularity and ease of use of Pex. It's not like the panels are materially more expensive that the mixing value, certainly as a % of the bath reno project overall it's a rounding error.

Not the answer you're looking for? Browse other questions tagged plumbing bathroom or ask your own question.

6
Why does my shower head drip when the tub faucet is on?

1
how to setup bathtub spout and shower head in separate locations
1
Bathtub/showerhead leak, short water pipe
2
Can a low-flow shower head cause a leak behind the wall?
1
I used pex to plumb my bathroom and now have water coming out the shower head when filling the tub
0
Shower Tub Valve leaking from behind cartridge