Years ago I read somewhere about a building material described like this :

I've since tried to find out what it was but without luck.

My use case is to modify a chest freezer by adding a "collar" between the lid and the chest to allow for running beverage lines into the chest freezer. This is a common DIY project for homebrewers called a "keezer". Here's a photo of a typical example. 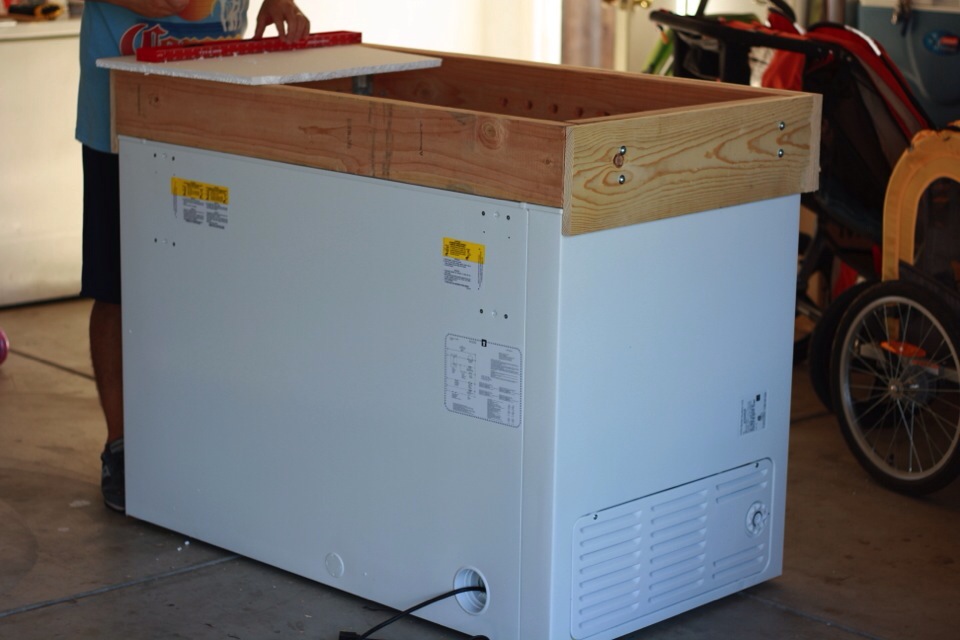 Often the material used to build this collar is dimensional lumber, which the builder then adds insulation to the inside of. I'd like to find out what this alternative building material is that I'd read about in hopes of using it instead.

Lots of things are better insulators than wood. Most of them aren't strong enough to be structural, or not better enough at insulating to bother, since generally people insulate with insulation materials that are designed to be good at that. If the thing you're describing existed, people would almost certainly build houses out of it instead of wood, unless it was ridiculously expensive. Perhaps you're thinking of composite lumber used for decking? This stuff is as strong as wood, and presumably slightly better at insulating given that it is a porous mixture of sawdust, plastic, and glue. It is more expensive though, and since it's not rated as insulation, it's questionable as to whether it's R-value is higher enough to matter. It almost always makes more sense to build the structure out of something strong and insulate that structure with something insulating unless you are not limited by space, cost, or strength considerations (in which case you would use foamglas, aerogel, or polyurethane, respectively).

I would stick to using real insulation here. 1" of XPS foam gives you R-5 at 70 degrees, which rises as the temperature falls below that--a useful characteristic if you're insulating against cold. EPS, mineral wool, and perlite have the same better-at-low-temperatures characteristic. Polyiso is the opposite: it gets better at higher temperatures, and worse at lower temperatures.

There is a product called Thermo-Lite which is probably what you want. it's available in a sheet/board form and it contains a closed cell foam with fiberglass reinforcement. It's incredibly nasty to work with (fiberglass dust) and it isn't terribly strong, but it's leagues ahead of any type of foam insulation board that has been suggested.

I work in the walk-in freezer/cooler industry and we use this stuff extensively, though I do not know where we order it from.

Here's a link to the product I found via google:

It's called HDPS (high density polystyrene) Most commonly used in decking. Some is a direct replacement for wood, and yes it is expensive. But your deck will last much longer without maintainance. It comes in different densities and the lighter the greater the r value, but the lower the strength. Unfortunatly there are pretenders in the market place. HDPS with 50% or more wood filler. I guess if it is good for a deck, it probably would work for this. But I always insist in 100% (no filler) HDPS. I think it's all made in China and so it isn't highly marketed against our natural resources in recent years. Google HDPS board and follow the bouncing ball.

Practically speaking, SIPs are about it.

Sounds like you might be thinking of some of the hopeful but largely unrealized press releases for autoclaved concrete or foamcrete (two different products, both with VERY limited practical availability despite nice websites and articles) though the "dimensional lumber sizing" aspect does not fit with that.

Not the answer you're looking for? Browse other questions tagged insulation materials load-bearing lumber or ask your own question.