The downspout out the back of my apartment has completely deteriorated. I didn't get around to looking at it when I moved in last summer, but finally got on a ladder and took a photo today: 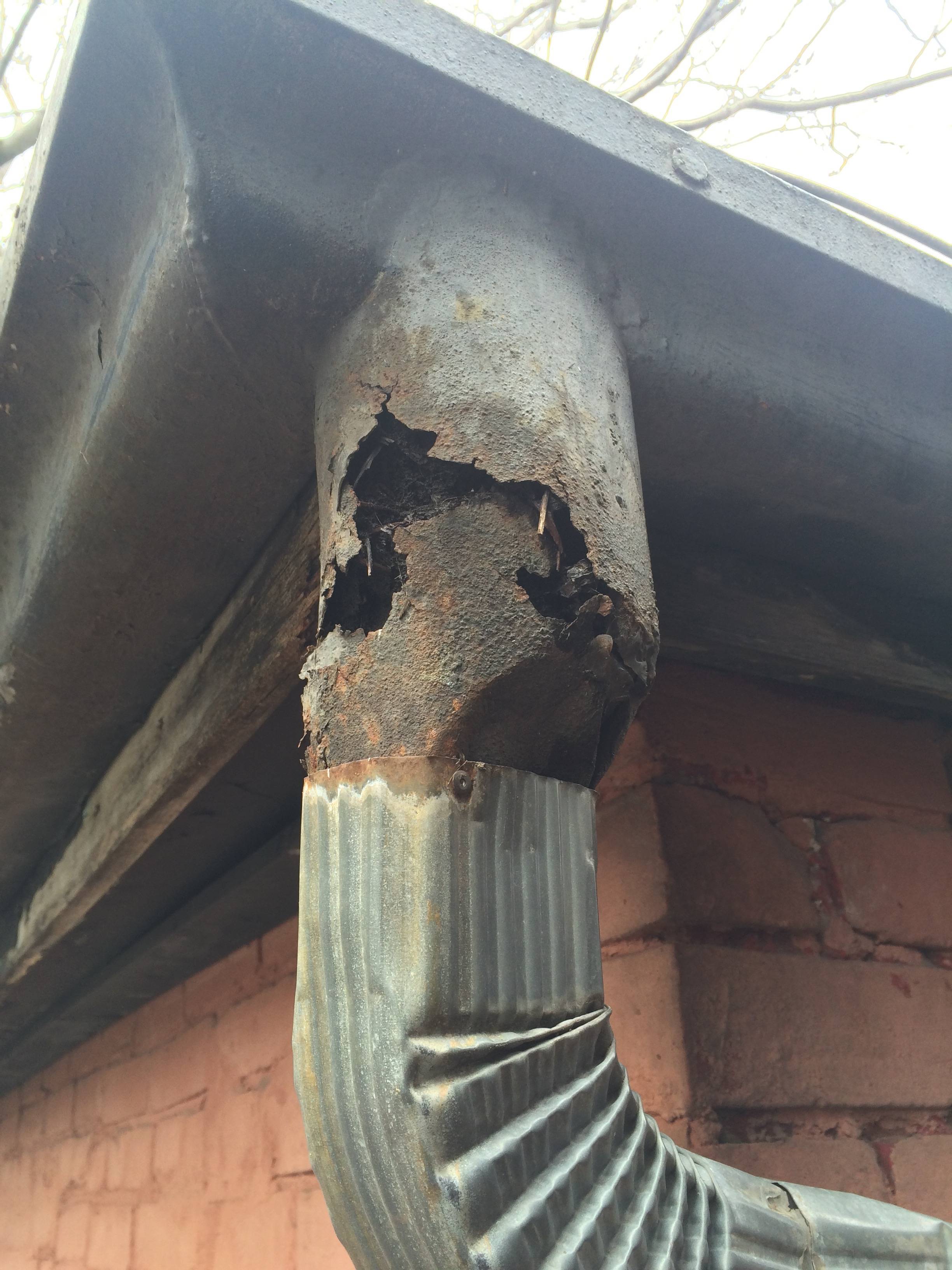 So as you can see, that's a mess. The upper portion is completely rusted through and is stuffed full of debris; it's actually barely hanging on there. The problem is, the part that's toast is part of the trough, fixed with a weld. I'm not about to take down the whole trough.

Any suggestions to mend this without removing large pieces of the trough? I know what to do to prevent this once it's fixed, but that's where I need to start.

Personally, I'd cut the downspout back so it is even (level with the ground), with about an inch of pipe hanging down (or as much as can be saved). Get another piece of pipe, in which the inside diameter is the same as the outside diameter of the original downspout. This will be used to replace the piece you just cut off. Before you affix your new pipe to the old, you'll need to put something on what is left of old pipe to save it from deteriorating further. I'd use a rust converter, something like POR-15. Use it liberally on the inside and the outside of the pipe ... wherever you see deterioration. If the new pipe is a snug fit on the old pipe, you can actually use the POR-15 to bond the two pieces of metal together. You'll also want to put some type of screen up top to prevent the debris from getting stuck down in the pipe again, or you'll run into the same issue. You'll need to get some type of reducer which will allow you to transition from the new piece of pipe to the crimped piping which is there now.

This would be the "easy" fix, if you will. If the deterioration is too bad, you'll need to consider a complete replacement of the gutter system. This would cost some serious money, but would bet you are going to have to do it sooner or later anyway. Check any other downspout to ensure the same thing isn't happening there. Use the POR-15 to prolong your pocketbook agony for as long as possible.

You want to get a cut off the rust and find a cup that is bigger than the current part and reduces down to your gutter size - or find a couple pieces that will do the trick working together. You always wants malfunctioning piece to be encapsulated.

From there you need to add a screen to the top of your downspout in your gutter so that debris does not get down there. First of all this is the reason for your rust. Debris got caught in their, stayed wet, and rusted it out. This is not normal. Need to add a screen and clean your gutters more. (I know it wasn't your fault just giving future advice)

Here's what I ended up doing, which was parts of both answers I received.

Home Depot only had 22ga galvanized steel, which is thicker than I needed and was definitely tougher to work with than it needed to be. At least it's sturdy. I got a small sheet.

I dug out what I could from above and then pulled the elbows off the bottom of the rusted end. Probably a kilogram of debris in there. At lease it didn't smell. I cut the rusted end above the worst of the damage to level it off.

I used some cardboard to rough up a template, which ended up being more or less a rectangle. I used a marker to mark 'cleanup' cuts once I put the metal in place initially. Made the cuts and put it in place snugly. Drilled a couple initial 1/8" holes for rivets (aluminum) and got them in, then attached it to the remaining pipe and the elbows.

Since the steel is galvanized, I didn't bother trying to rustproof it further. I riveted the inside edge of the cone as snugly as possible to avoid leaving places for debris to get caught up. Everything fit very well, so I didn't use any caulk or adhesives. 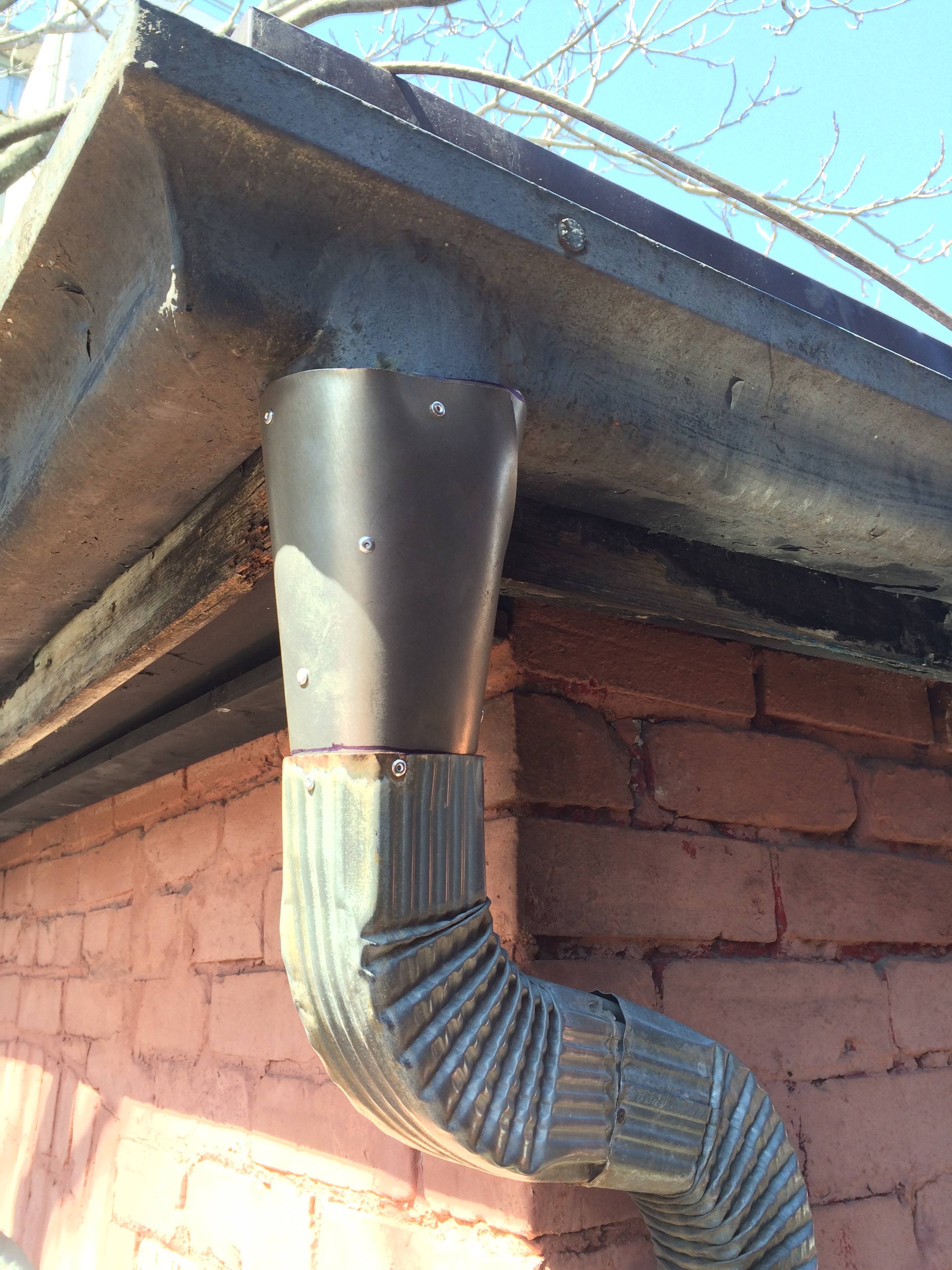 Not the answer you're looking for? Browse other questions tagged drainage gutters downspout or ask your own question.