We found this house that we really like, but it needs substantial renovation for our taste. The thing that killed it for us was the crazy kitchen countertop that has been narrowed to make way for a walkway. It seemed like there was no feasible way to work around this because of the placement of the support post. (See below photo) 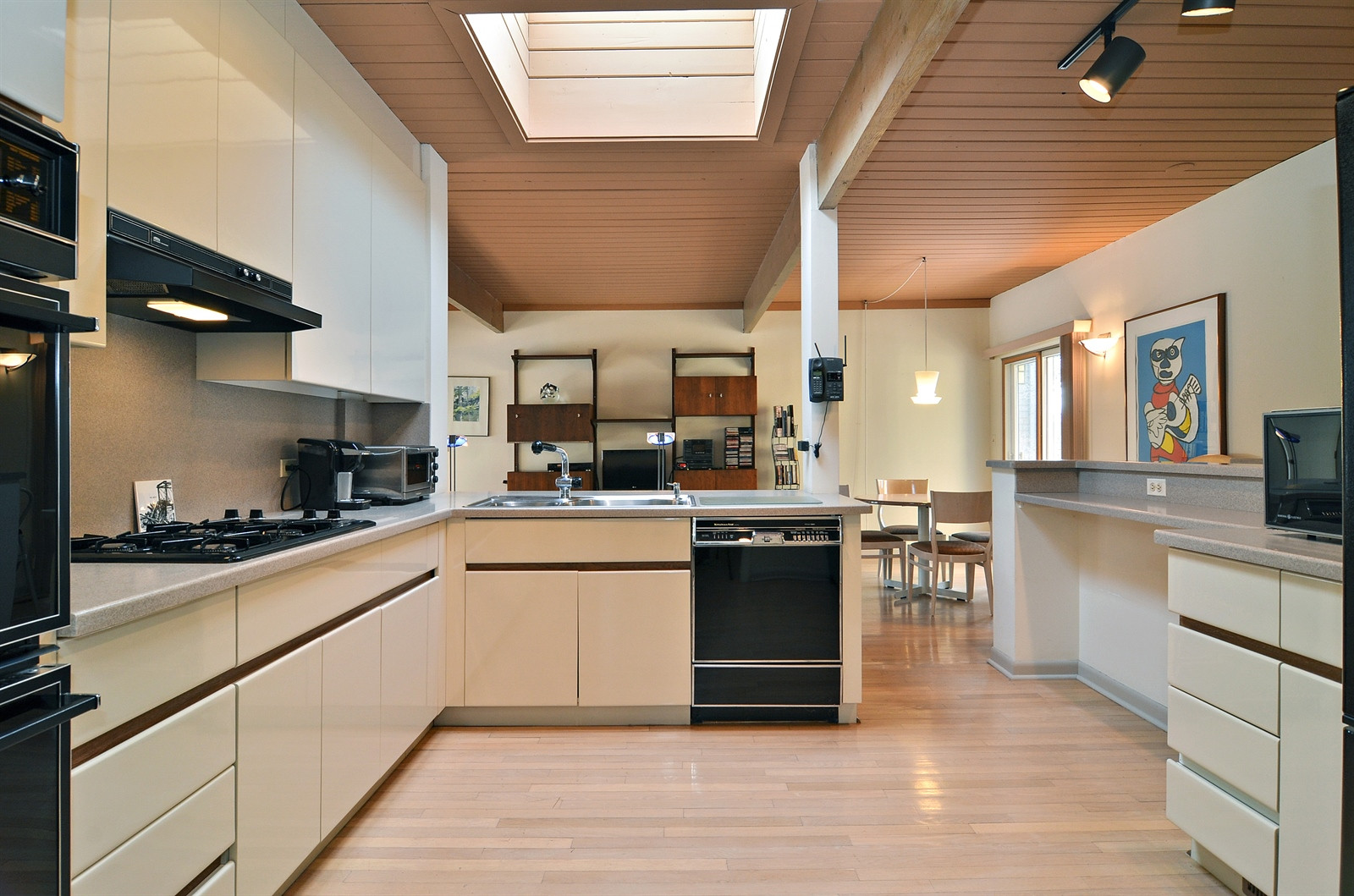 So, I'm wondering: Is it feasible to relocate a support post? The ideal location functionally would be to push the post to the right of the photo (towards the painting of the bear), so that it's instead along the half wall of the silly narrowed counter.

Would it be possible to move this post to the right and still support the beam it's presently holding up? If so, what would be involved in moving the post and presumably adding some kind of additional (steel?) beam work along the ceiling as needed?

Here's the view from the other side: 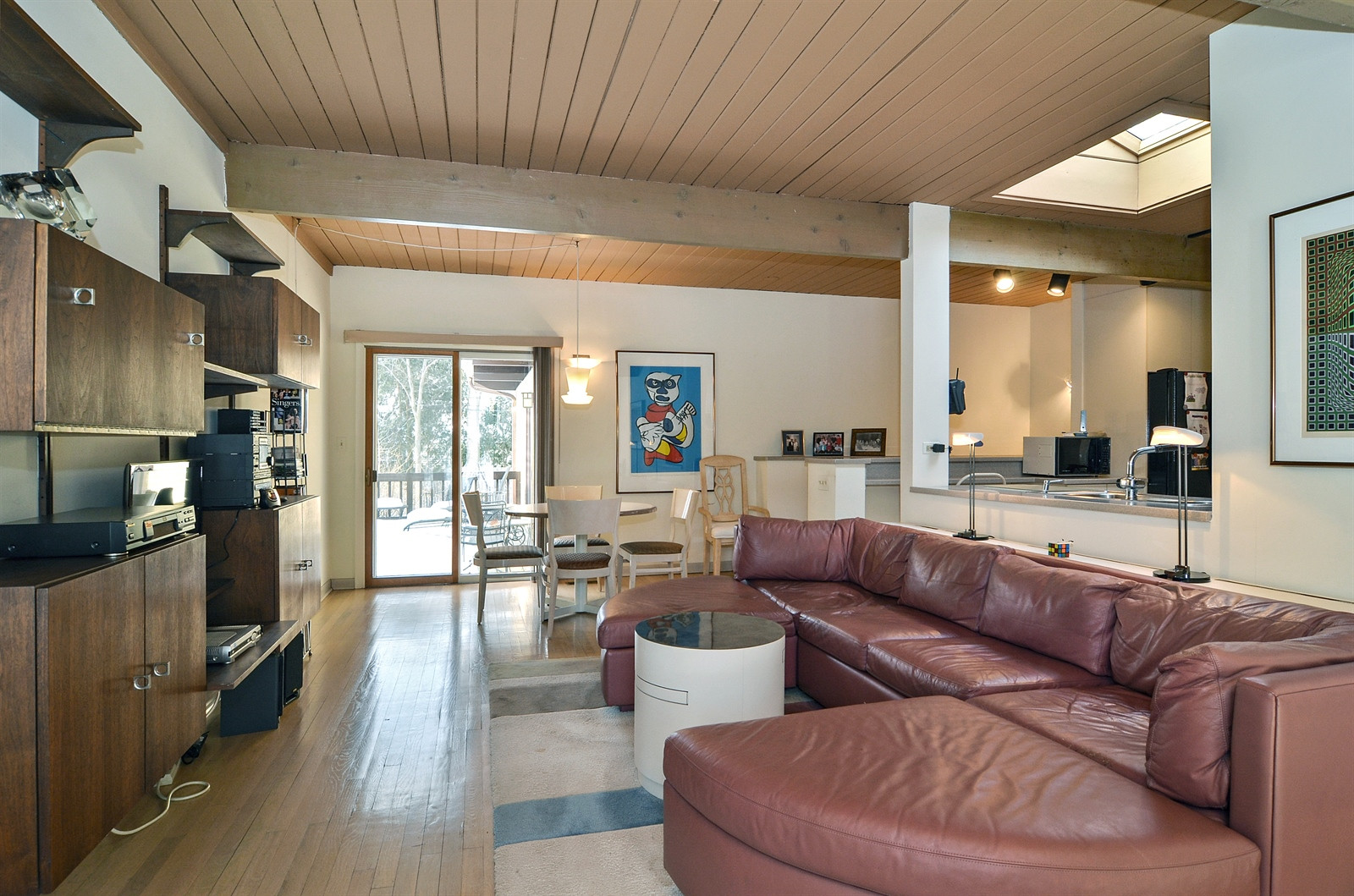 You would certainly need to consult a structural engineer and get all plans approved and permitted before beginning work. It will be expensive but since you indicate willingness here goes.... It is completely possible to relocate that post. The question will always be price and design. In my humble opinion the work isn't even all that difficult once you know exactly which material and sizes are required for the load.

That support post is compression support for the visible beam. In order to properly move it you would likely need to add two vertical support beams with a perpendicular cross member to take their place. This member would likely be steel.

Alternatively, depending on the roof structure, you may be able to hang the new beam above the visible beam inside the attic space. This would have the added benefit of not eating interior headroom. You would probably place the vertical beams inside the wall where the bear painting is, and the wall to the left of the sink.

Either approach should work. Neither is significantly complex for a structural engineer. They will both likely be quite expensive to do.

EDIT: So how will they change it? What's involved? If you put the beam below the existing one, then temporary support posts will be constructed on both sides of the existing post. The post would then be removed and a replacement beam jacked in place beneath it.

If the beam is to be "hung" from a new crossmember then the existing post will stay in place while the new posts are built. The beam would be jacked up slightly from both sides, and a steel hanger bracket would be placed under it, fastening it to the new in-ceiling beam. Finally, the existing post is removed.

In both cases a support immediately below the beam, beneath the floor, should give support all the way to foundation which means that you may need to pour in the crawlspace and tie into the existing stem walls.

My suspicion is that the ceiling joists are lapped over that beam, something like: 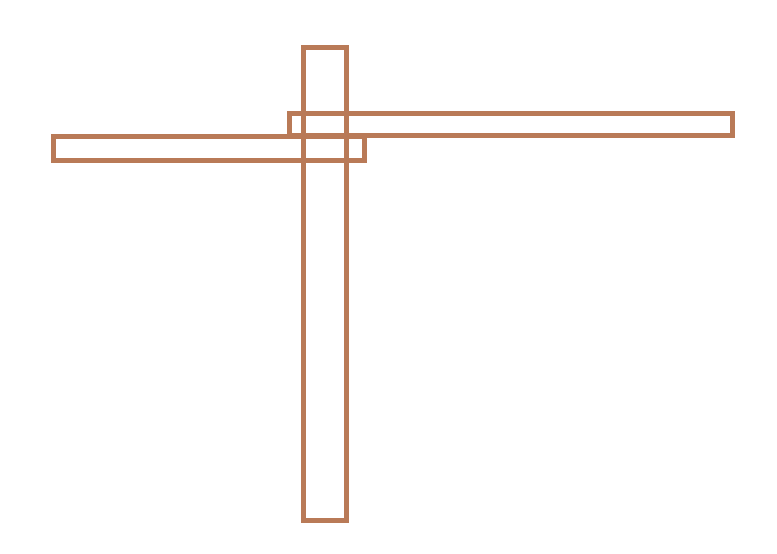 So moving the beam is nearly impossible without major structural work.

Furthermore, in the basement, under the post there is likely a footer. You'd need to crack the concrete floor and dig a 20 inch deep hole and fill it with concrete and rebar for the new post location in the basement.

I really don't think you're going to be able to do this for $15k. It's major structural work. 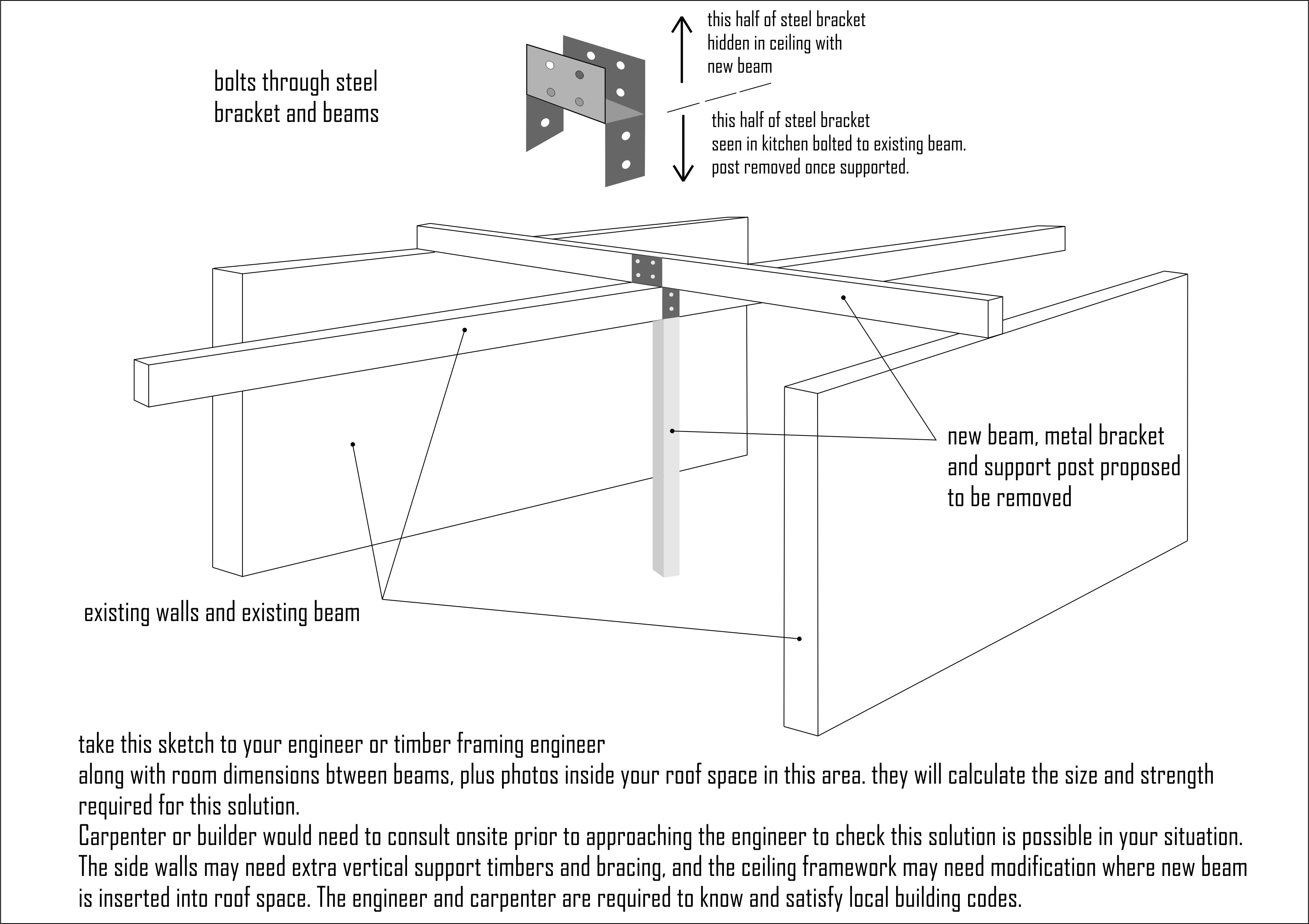 I have seen this solution done many times, and it is taught in carpentry and building courses. Please note homeowners must not attempt to design or carry out this work themselves. Your whole roof may collapse in on you. Your roof framing may be one of two standard types - truss framed roof or "old school" non truss (officially called traditional and or conventional roof framing)(those words are not describing the shape of your roof BTW). Depending which roof frame type your house has been built with, you will need to apply a different solution to this particular situation. Sometimes to save on the cost of one large beam fitting into the ceiling several smaller beam can span across and become hangers for this larger beam which you want to remove the support post from. Approx cost guide 2018 - $500 engineer, $200 council approval application and a few weeks waiting for it, $500 new beam and brackets, $500 replace ceiling (gyprock and plasterer), $1000 a day for between 1-3 days work for carpenter gang of 2 or 3 once all materials on site and ready to go. $1000 contingency for shifting electrical cables currently in ceiling, more if you have gas or air con pipes in ceiling, and more again if you need to take roof covering off and hire scaffolding to get new beam into the ceiling space. This solution is virtually impossible if this is a two storey house. hope this helps all you readers out, and doesnt put you off. Apologies for the scratchy sketch, just knocked it up quickly to make the points clearer.

What's involved is more money than you could possibly want to spend. Incorporating it into an island would be expensive enough: (nothing would be acceptable esthetically without a complete structural re-work) 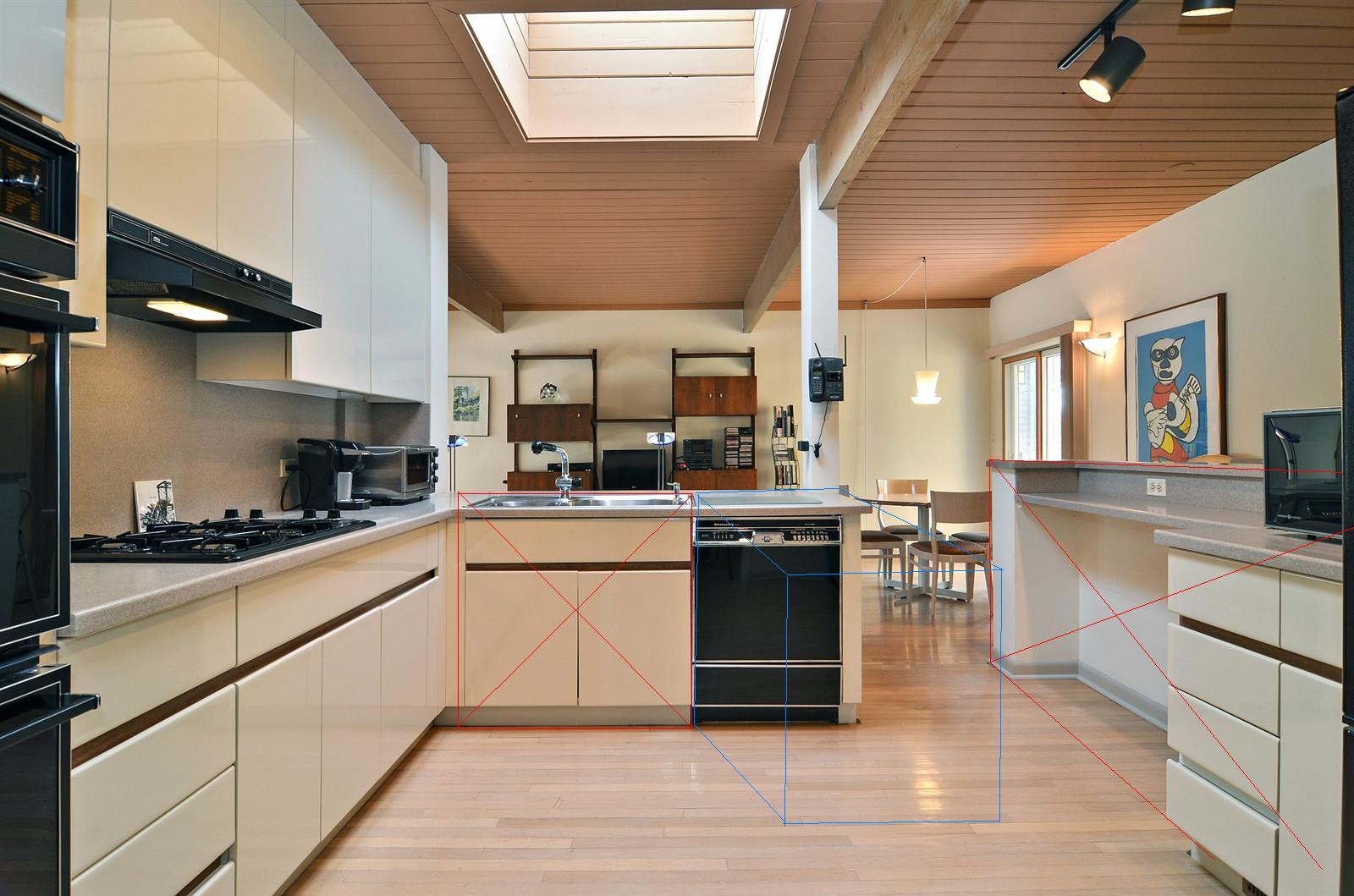 No it is not feasible to change that post. It could be moved but it would have to go into the kitchen more, which I am sure would make matters worse for you. So the answer would be no. Moving it would be pretty much redoing the supports for the house.

Also you said that this house needs major renovations. Just a suggestion from a long-time flipper...

This house doesn't need major renovations. This house looks great and just needs some minor updates and new appliances. There is a good chance that if you spent 80k renovating this area that it would be work 10k more. I suggest if you think this house needs major renovations that you want to really make your mark on a house and do what you want - then start looking at houses in far far worse condition. I am sure there are similar houses in the area haven't been kept up. Restore these and add value to both the house and your pocket book.

I have done many jobs like this. Esthetic values can make all the difference for the home owner but remember the column is there for a very specific purpose. Speculating upon it from finished photos is fruitless. Building codes vary by region, here an architect needs to be consulted. Structural engineers rarely work on anything but large public works. An architect will pull the original plan and take field measurements to make calculations for the modifications.

The skylight suggests the roof is immediately above the ceiling and a larger beam or truss may be able to replace the existing exposed beam on the roof level providing the existing bearings are adequate. Otherwise you may have to replace one column with two, as well as their footings.

Not the answer you're looking for? Browse other questions tagged structural renovation post support beam or ask your own question.

1
Is a sandwiched beam made out of 2x4s laid flat a suitable for a 15' span that doesn't carry a load?
3
Strange looking garage beam support post
1
Please help - wonky post location on pergola - concerned with shearing and stability
0
Alternative designs for a load bearing wall