How can I eliminate home shaking caused by vibration from heavy traffic/poor road condition?

I need your help! I own a house near a state road (trucks, buses are allowed) near Philadelphia. With the bad snow years the past few years, our road condition deteriorated but not so badly (little bumps), but badly enough to shake/vibrate my home when big trucks/buses go by (about 45 miles per hour). I'm trying to find a way to perhaps dig the backyard about 6ft (1-2ft wide), and pour in concrete or something that can dampen the vibration (person from Lowe's said this). Is there anything I can do? FYI: distance to my home from the street is about 100 - 150ft (our backyard). I'm willing to spend the money as long as I can eliminate this vibration coming from the state road through the ground.

Things I have done already:

Your advice will be appreciated! FYI: My home is shown here in blue dot next to the state road (Lancaster Ave). 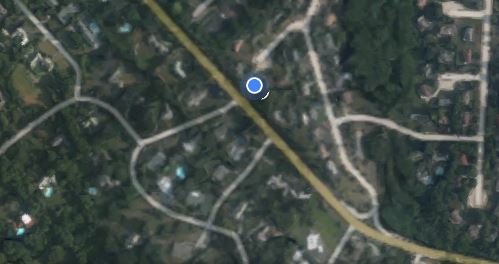 I posted this to one person, but thought it can benefit more folks.

What I did (digging 6ft x 90ft inground trench, and pouring sand to fill it) didn't work. I ended up wasting $15K...My home still shakes, and I'm out of ideas... If it worked, I was going to put up some photos of all the work, but what a bummer (so if you are having a similar issue - don't dig!). I followed the research work by someone in Canada who I liked the idea of, but oh well. Asked the township to resurface the road and stuff. They'll do it over this summer, and I'm hoping that can do the trick. Below is the picture right before sand was poured in. 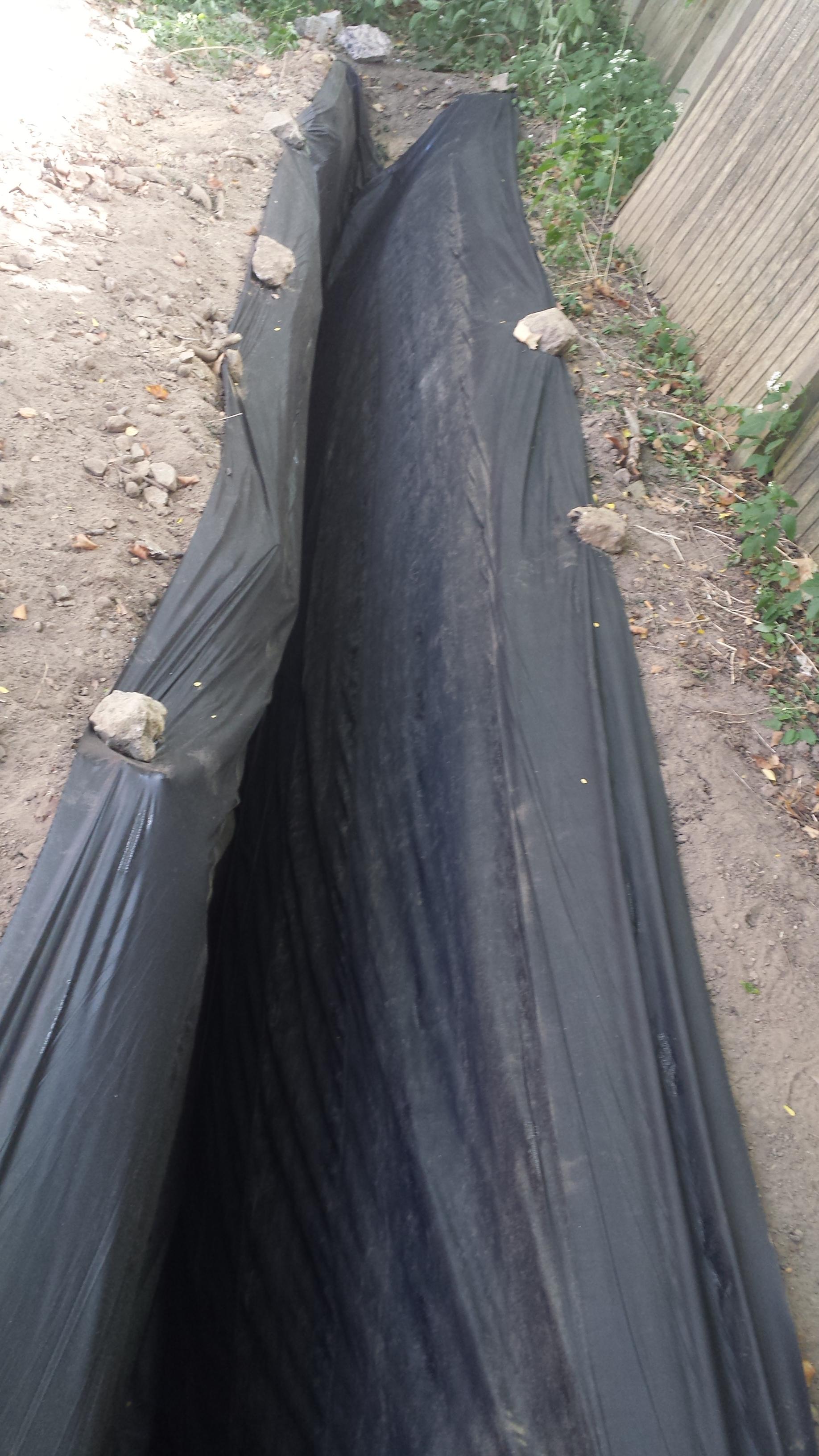 since its very difficult to decouple a home from its surrounding substrates, and sound propagation would otherwise just continue, you probably wont be able to do it unless you lift the house and isolate it from the earth. berms, walls, and other physical barriers would have to be carefully designed, and probably be massively heavy to have any effect - all costly and invasive.

however, you have another option but it might be expensive. you can have a sound engineer design an active acoustical damper for your home. basically it uses large subwoofers to blast sound waves through your foundation (or at least at your foundation from the interior of the home). the subs are triggered by sensors on the foundation walls and out in the yard and are all controlled by a computer. essentially when a vibration comes in, it blasts the opposite waveform and cancels it out. the issue is going to be finding someone to do it. i was part of a job fifteen years ago that had something like this designed and installed for a site for a large optical telescope, and it worked amazingly well. but i have no idea where you would start to look for the right guys to do it. maybe your local college physics or engineering department?

this kind of thing would be better answered with, sell your house and buy a better located home... but if you have the money you can have the house lifted and have a foundation built deep into the ground. this will largly fix it and other ways is by using newer home codes like 18 inch center framing with 4x4 doubled with 2x4s in each wall direction, newer or extra supported joist and heavy duty center beam running the length of your home. these fixes will improve your home value but but unfortunately not dollar for dollar lifting a home is pricy foundation is a fortune..... you can cheaply put your house on earthquake shock stilts this is pricy but lift your house 6 ft but you can skirt it and maybe customize a storage space.

There is a way without dampening the entire house, but it will sacrifice square footage. Instead of dampening the whole house, you can try dampening just rooms, and only the rooms where it is important. The slight shaking probably doesn't bother you while eating breakfast, so the dining room doesn't matter as much as the bedroom, for example.

By isolating the floor from the structure, you could reduce or eliminate structural vibrations. You should hire an acoustical engineer to measure the vibrations and design an isolation solution for the floor in the needed rooms.

If, however, the vibration is more than structural vibration and also includes airborne vibration, then more extreme measures must be taken including dampening the walls and ceilings and added additional soundproofing in the windows such as replacing with triple-pane windows for example, as well as dampening the floor vibrations.

Like others said, the best way is to have the house lifted and dampened. Yes, this can be done. There is a market for lifting and moving houses. The same technique to move a house, or to add a basement, can be used to lift your house and add dampening. They jack up your house like jacking up a car, literally, and then you can add a dampened basement, or just dampening under the house, to reduce vibrations. Without an engineer to test it, I wouldn't expect miracles, so I would recommend an acoustical expert to measure the vibrations and then design a damping solution.

Do keep in mind, any way you go will be a considerable cost. $15,000 would just be the start of it, you could pay much more for a full solution. Considering this, you should debate whether it is more economical or reasonable to modify your existing structure for possible returns on investment, or moving to a new home for possibly less net cost. If you are worried about the morality of it, just be clear with the buyers about the vibration issues. Perhaps some people would be willing to gamble with it, or perhaps they sleep through an earthquake and it won't matter much. It's good you want to be up front with the buyer and I am glad you are going to be honest.

It does seem that your best solution will be to move, but you could try doing DIY floor dampening in the affected rooms as a preliminary measure to see if it helps, before taking more drastic measures; but be warned that a DIY solution for this kind of issue may cost you more in the long run without much result. Ideally, hire an acoustical engineer to diagnose the problem and then try to DIY their solution for the most economical, but if you do something wrong, it could all be in vain.

Not the answer you're looking for? Browse other questions tagged construction vibration or ask your own question.