What are these blue and yellow cables coming out of my house for?

I recently purchased a house built in 2007. All houses in the area have those cables on the side of the house. The white cable on the picture is for cable/tv. But what about the blue/yellow cables? Are they safe to remove? 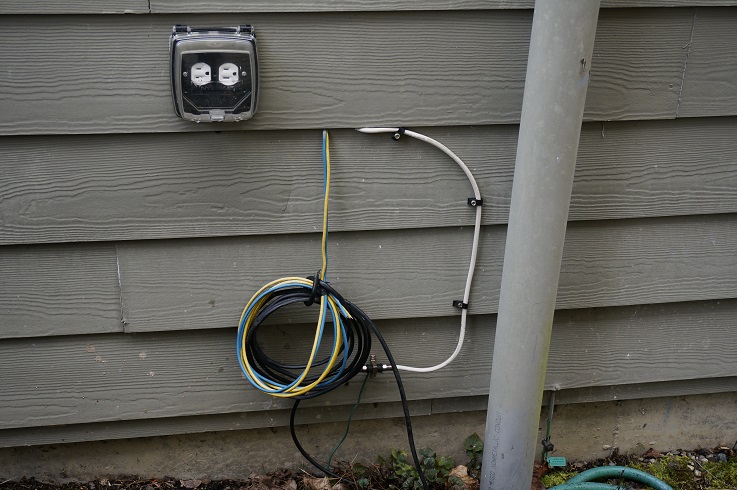 As best one can see from that resolution those are twisted pair cables. The blue is probably a Cat5e or Cat6, for ethernet, and the yellow is probably Cat3/VG for phone. If you look closely you should see the rating on the jacket.

If your area has or is scheduled to receive fiber-optic com utilities then some vendors (like FIOS) put the fiber terminal outside and split off the various services from there.

If they're not connected on either end they're safe to remove, but I'd leave terminals in case you want to connect service so you don't have to drill back through the siding.

With the limited information provided, they could be anything. Likely they are for telco, but could also be for monitoring your water meter, or could part of an alarm system (fake phone line that triggers an alarm if cut). It could also be speaker wiring or some other low voltage wiring.

I would suggest you leave it until you know for certain what it is. If you were to remove it, and later had a need for it, you would need to run new wiring which could involve cutting walls and drilling another hole through your siding. Extra wires are usually a good thing that you'll be happy to have at a later date.

As one of the commenters suggested, one of your neighbours probably has an idea what they are for.

I finally found out what those cables are. They are simply CAT 5 cables. They were used by the Frontier technician to install FiOS.

The blue/yellow color is just to distinguish the cables.

Not the answer you're looking for? Browse other questions tagged new-home cables cable-management or ask your own question.

12
What are some pros, cons and recommendations for multicables?
3
How to remove old wires of utility companies
0
How do I run an Ethernet cable through a doorway in a Mexican house built with brick and mortar?
3
Garden light connected to main lounge light stopped working
1
How to find what code is in my area for insulation in an unfinished basement?
1
Ethernet Cables and Coax Cables running outside house? How to Modify to Home Distribution Panel
0
How do you disconnect a tv satellite from the roof?
4
Cable TV, Antenna, Coaxial - what is this thing?
0
Identify this 12 wire cable
0
Replace coaxial cable