How noticeable should the seam be on a quartz counter install?

This is my first question on the DIY stack so be gentle with me!

We just had new quartz counters installed in our kitchen renovation. We have done everything else our selves, but we figured we would use professionals for the counter top since we wanted to make sure it looked perfect. It is a medium sized L shaped counter area and due to the size of the counter the installer informed us that it would require two seams and gave us a few options for where they could locate the seams. We were a bit concerned about this but he assured us that you would not notice the seams unless you really looked for them.

Fast forward a few weeks to the installation date. The counters looked FANTASTIC as they were being installed. Unfortunately, once the installers finished and were ready for us to sign the satisfaction form we took a look at the seams and they are very noticeable. We refused to sign the satisfaction form at this point in time because we wanted to investigate it further.

How noticeable should the seams be for a quartz counter installation? Obviously this depends on the texture and color of the counter, but is it something that should ever be painfully obvious? Do the pictures below illustrate what can be expected for this type of counter? 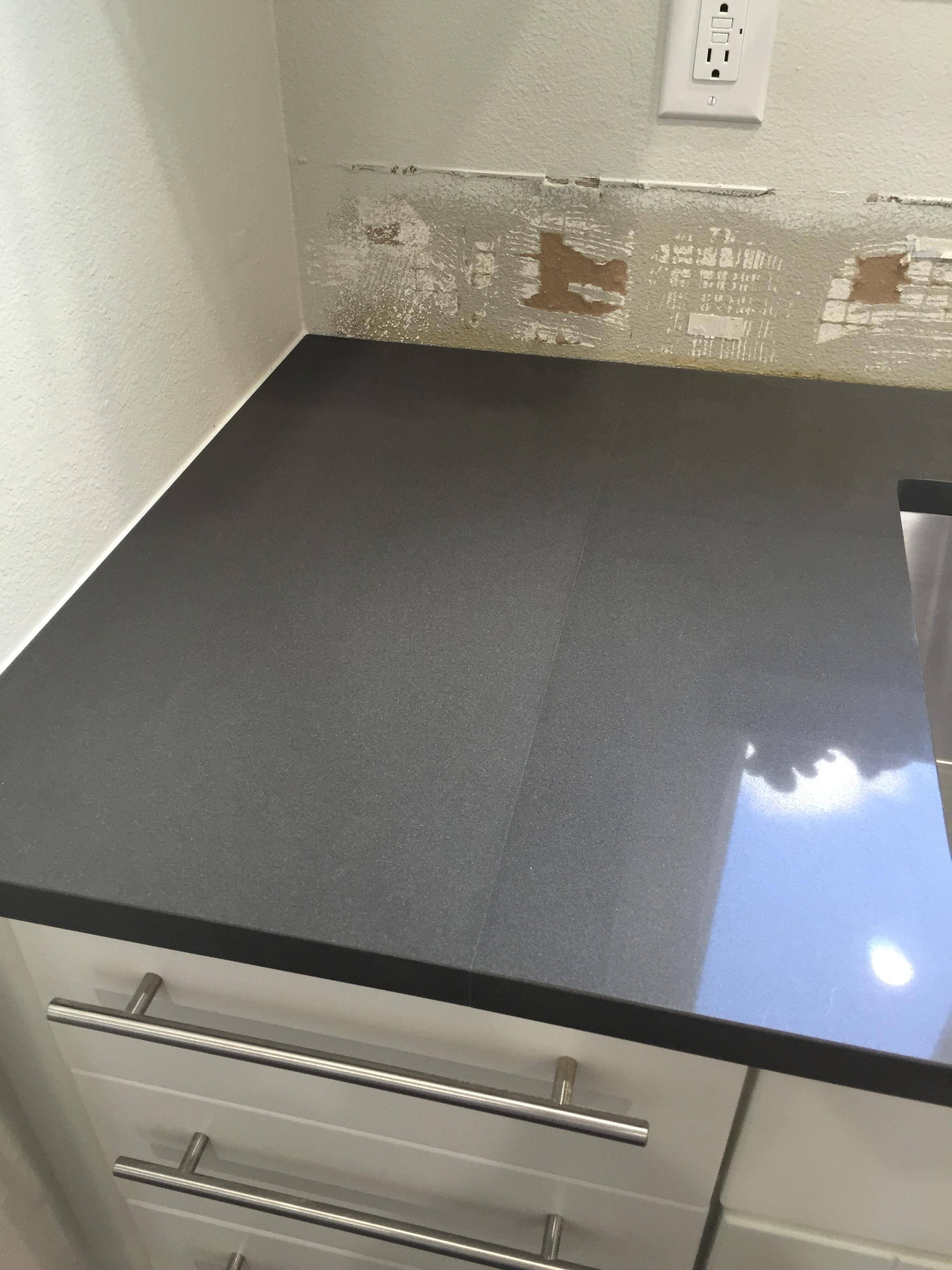 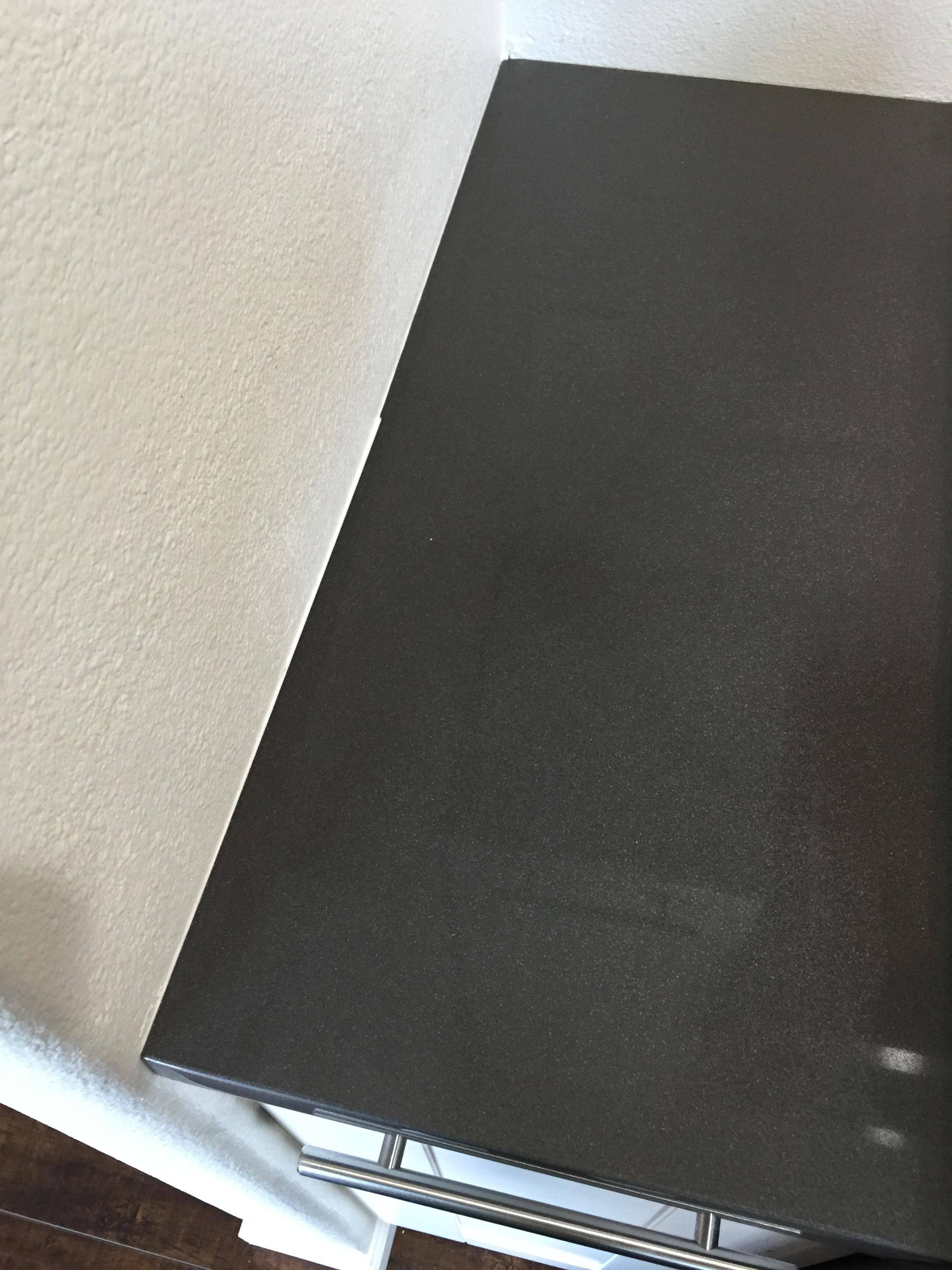 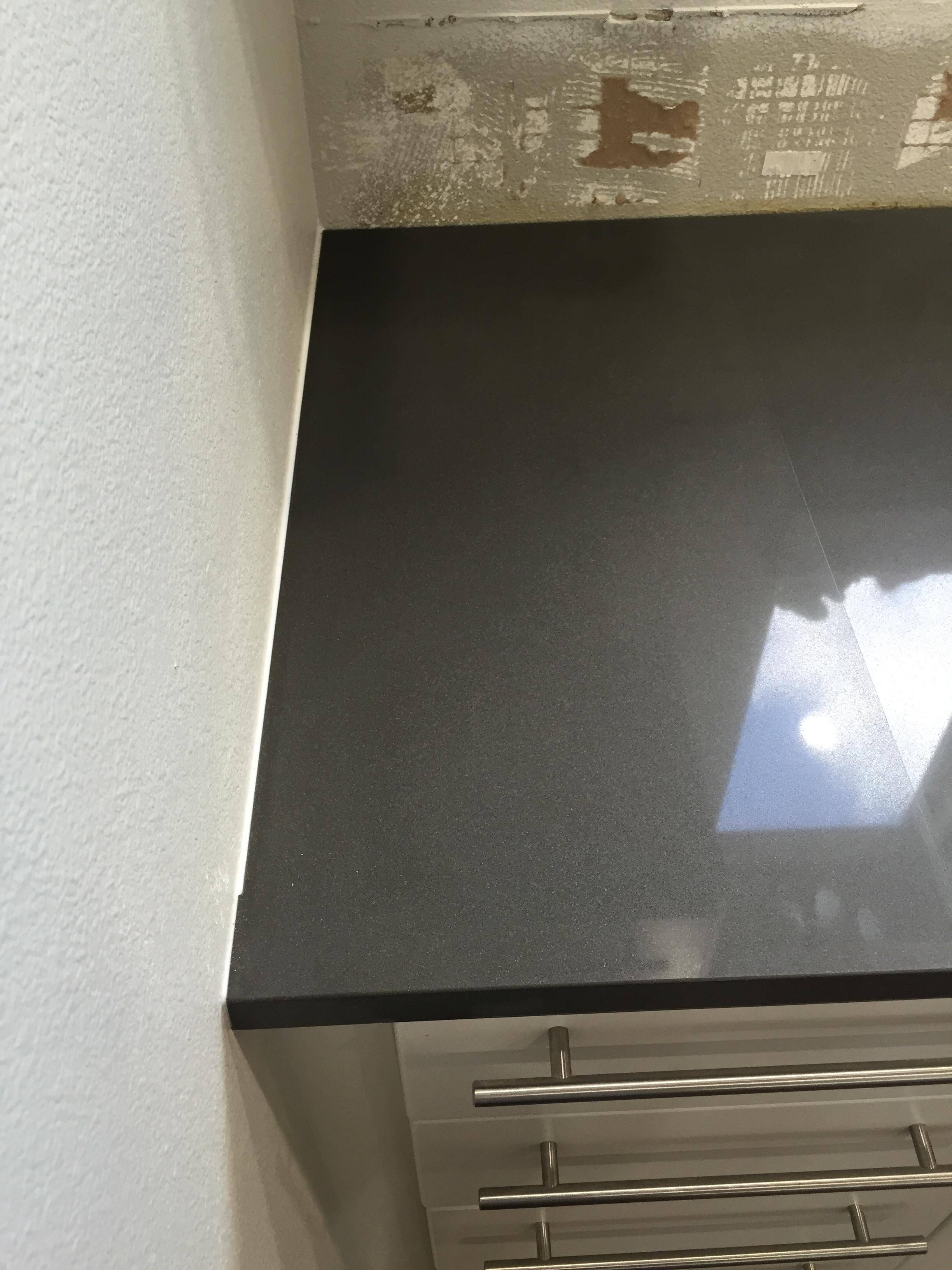 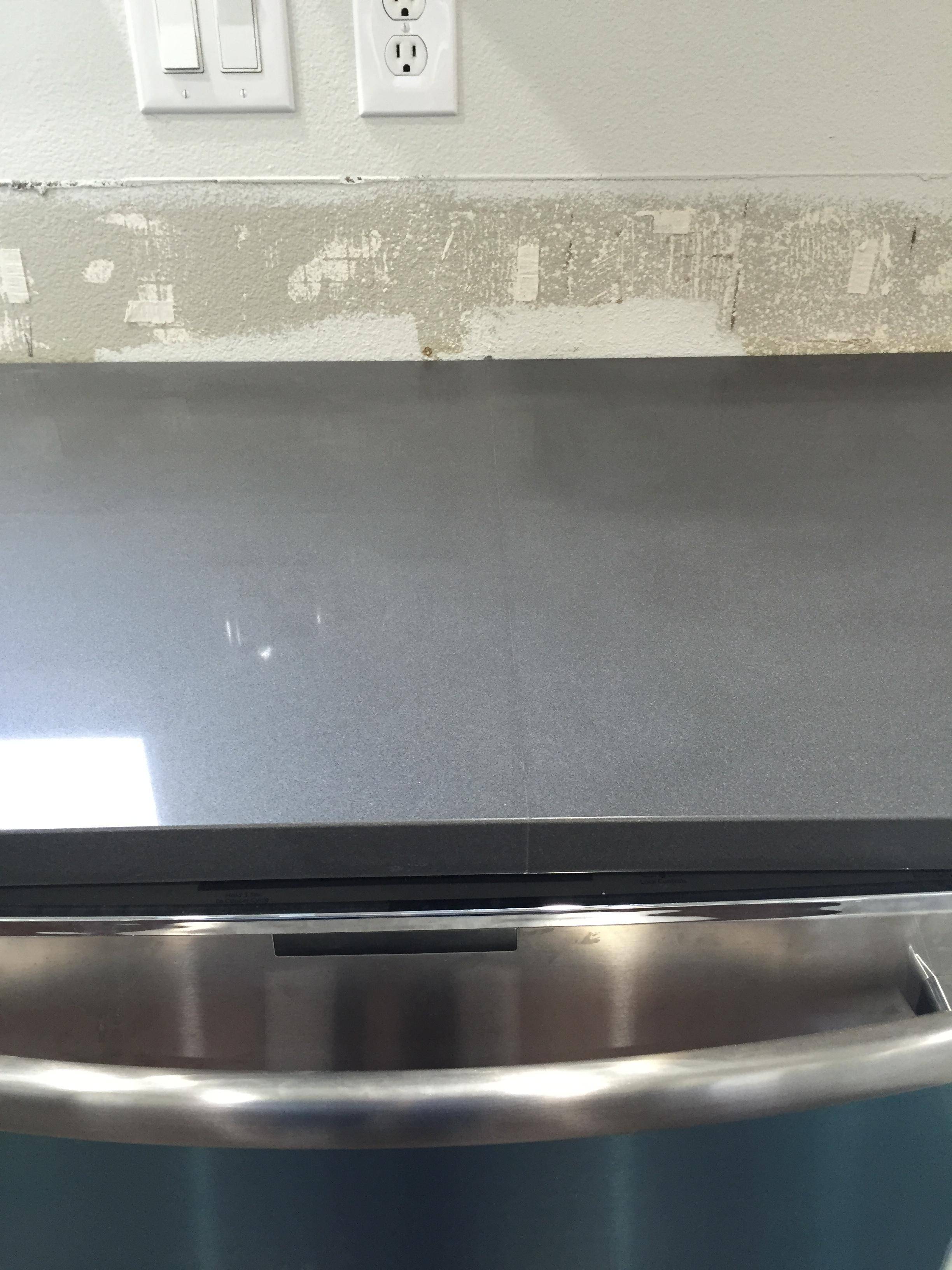 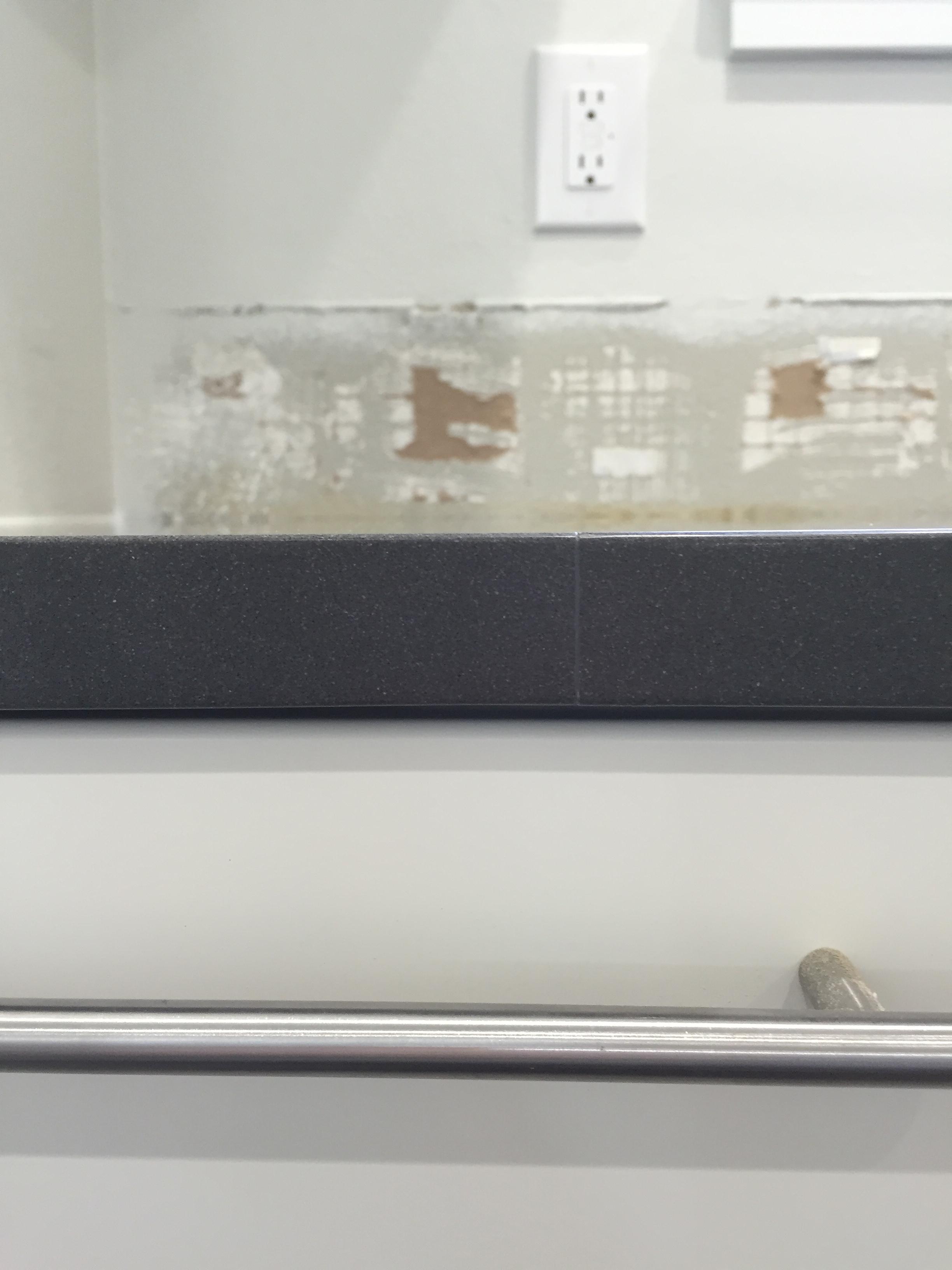 Based on the feedback I received from this site, as well as a few other companies I contacted for consultation, I have determined that this is NOT the normal for this type of counter installation. The general consensus is:

I have contacted the company that provided the counter tops and they are sending someone out to take a look at the counters and see if there is anything they can do. I will update this post again once we get to a final solution.

The company has been great to work with to resolve this issue. Unfortunately, because the counter was already cut they couldn't do anything about the double seams, which is annoying. However, they did have their crew out to my house twice to get the seams as minimal as possible (both look great now) and to fix a few chips in the counter. I would leave the following advice for anyone else having a counter install:

I wouldn't sign the form if you were told that you wouldn't be able to notice the seams. As Jack says, they are in horrible locations. But the #1 thing I am thinking about is I have had granite and quartz installed on at least 30-40 kitchens, with at least 15-20 Ls. You have two sheets, not 3 and your seam is in the corner. If they are using smaller pieces they could easily be using leftovers from other jobs, maybe really costing them nothing more than labor. I would have never allowed them to install 3 slabs there. That is the biggest mistake.

I have had many many companies propose something like this, a couple with no-see guarantees. I took two of them up on it in the beginning and they both looked like yours. Got the first one at 1/3 cost and told them to take the second one out. Never did I go for the three slabs.

Now the other issue is the install itself. To me - and I am just seeing a picture - it looks like the slabs aren't exactly level with each other. They may be off by 1/128th of an inch but it looks like they are off. Then you have the epoxy filler which was not mixed with a matching sparkle nor was it sanded/buffed properly at the site. I have paid a lot for high quality quartz and don't have pictures but the seams are much smaller than yours and really you couldn't see them unless you put a spot light on them.

The question is did you get what you paid for. Did this cost you $500-800 and you are expecting better? If you paid full/normal cost you probably just need them to come take the counters. You obviously aren't happy now. Let me tell you by the looks of your seams, they aren't going to look this good in 3-4 years. So you are seeing them in their best state.

The seam is pretty good, they chose a really bad spot to put it. It should have been placed at the narrow spot in the first picture. Never in the middle of a cabinet front, where you look at it every time you open the drawer in the picture. That one should not even be there. This installer was trying to get by with out getting into another slab, or not good planning, IMHO. There has to some reason why the installer put the joint there, but whatever it is, the reason is not good enough. Seams should only be at corners where the countertop changes directions, or if the run is over 8-10ft long with no cutouts for ovens or sinks, etc... and those are usually placed over the edges of the cabinets. Sorry if I sound a little critical, this should not pass a quality work even if the joints are done well.

The join is done very well, better than most companies out there. The problem is that the join should not be there at all. There should only be 1 join per "corner" of a bench. I.e. one join for a L shape bench and two joins for a U shape bench.

The only time when the above does not apply is when your benchtop length is over 3000mm long since most slabs maximum length is only 3000mm. Therefore, will need a join to extend the benchtop to over 3000mm. However, if this is the reason why there is a join in your photo, then the company should have informed you before they installed the benchtop so that you are aware of it.

The seam is excellent. If people want no seam they need corian or staron both better products than quartz imho. The biggest issue here is how the product was sold. Some patterns seam very well ( but never invisible) also quartz chips very easily especially Caesar stone. Higher end quartz and pattern like pebble are very easy to repair. At least you don't have white it stains also. But again most sales people have no idea how delicate this product is.

Not the answer you're looking for? Browse other questions tagged kitchen-counters or ask your own question.

3
How is Hanstone compared to other quartz products?
1
How can I repair a hole in the underside of a granite counter?
2
How do I make this large mold for concrete countertop?
0
How bad is the seam on my quartz kitchen countertops?
0
Is it normal to see variation in manufactured quartz countertop sections?
1
How to make the seam of a Quartz counter top disappear as much as possible?
1
How can I tell if a remnant of granite matches my counter?
2
How do I install a countertop with a large overhang without using a corbel or post?
2
How do I support a granite countertop over a dishwasher?