How high can I adjust water pressure in my well tank?

I have a well with a pressure tank that supplies household water. I'm replacing the pressure switch because it's old and faulty. I see that pressure switches come in 20/40, 30/50 and 40/60 psi presets. I bought the 40/60 because higher pressure is always nice to have.

My question is, why is 40/60 the highest these switches go? Can I adjust it higher without damaging the pump or tank? For example, as long as I increase the air pressure in the bladder to 48 psi, can I set the switch to 50/70?

It's not a free pass going to higher pressure.

First off, any given pressure tank has a larger drawdown (tidal volume, amount of useful water stored) at 20/40 than any higher setting. Unless you increase the size of, or add additional pressure tanks, at a higher pressure your pump will stop and start more frequently (which is usually considered to be a large factor in how fast it wears out - running longer and starting less is better than running less each time, but starting more.) As you can see from the example chart below, for a given tank, 40/60 is already less than half the volume stored at 20/40.

This version is not quite as bad (they do vary a bit): 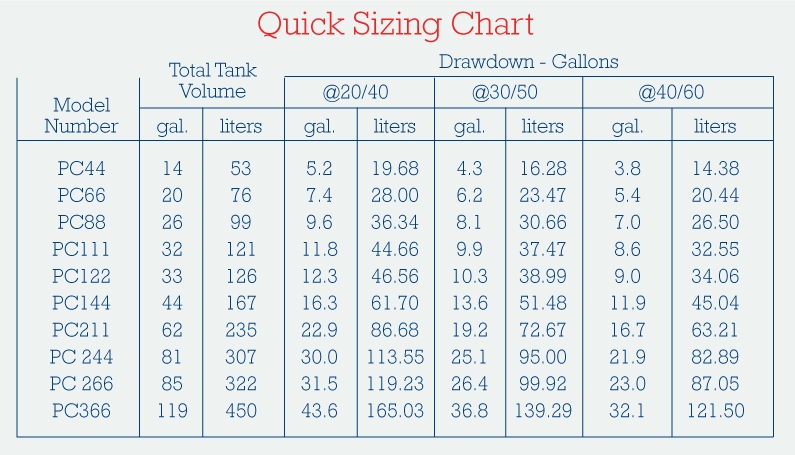 You will need to check your tank, but most pressure tanks are good to 100 or 125 PSI (the ones in the upper chart are only 75 though), so that's probably not the limiting factor. You'll need to check what the pressure on your hot water heater's temperature-pressure valve is, but it's probably also fine. My pump supplier suggested (and I installed) a 100PSI overpressure valve on the system as the pipe entered the house.

Many common items (toilet valves, etc) don't really like pressure over 80 PSI (yes, I know you only proposed 70.) 60/80 is about as high as you can expect to adjust most pump control valves to.

It's not the most common situation, but if your well pump is marginal for the depth you may reach a situation where it's cannot reach the higher setpoint as you use water and draw the well level down - so it will sit and spin but not reach the shutoff pressure.

If your system was designed for 20/40, I'd suggest doubling or tripling your tank capacity if going to 40/60, and tripling if going to 50/70. How important that is may be influenced by how deep and inconvenient and expensive your pump will be to change when its time comes. Cheap and easy, maybe you don't bother increasing the tank at all. Expensive and a major hassle - you might consider more tankage a good investment.

Not the answer you're looking for? Browse other questions tagged water-pressure well or ask your own question.

1
Water tank will not charge
1
What should I do if the pressure is too high in a home water pressure increasing system?
1
Max pressure I can set my well to?
0
Adjusting pressure relief valve on well water
1
Can I just add air to an air-over-water pressure tank?
0
Well pump cycles, presure switch on and off ,contacts keep breaking in the pressure switch
1
Well pump ends up overwhelmed. How can I solve this?
0
Sizing a Well Pressure Tank - Size Change
0
Why does one pressure tank on my well only pressurize partly?