This armored wire shows 2 sets of wire crimped and a ground.

For box fill would this be considered 3 or 5?

Does this increase amprage and voltage allowances?

Is there any other circumstances a cable like this be used?

Is there a name for this? 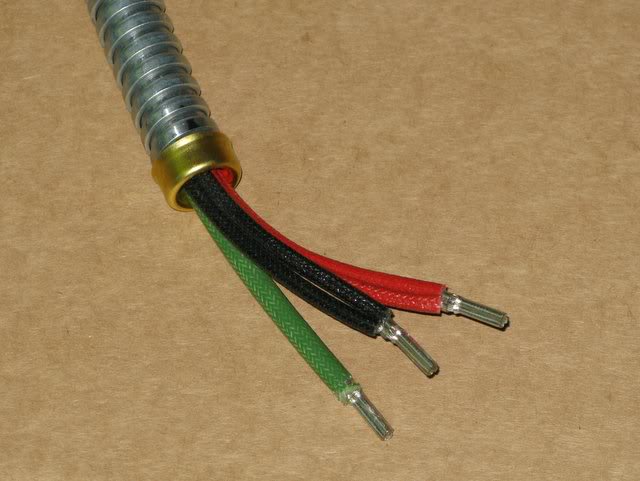 I realize this is a specialty wire for a specified purpose.

Since this flex whip is supplied as an integral part of the cooktop (instead of being building wiring), and consists of what I presume are fixture-type wires in a length of FMC, the conductor-paralleling provisions in 310.10(H)(1) may not apply -- UL is the one who makes the decision on whether wires in an appliance can be paralleled or not. Furthermore, the paired wires may go to different modules in the cooktop -- it appears to be common for large electric or induction cooktops to be broken up into multiple parts for load distribution purposes.

However, there is precedent in the NEC for treating the stove wires as tap conductors from the branch circuit, as per 210.19(A)(3) Exception 1:

Exception No.1: Conductors tapped from a 50-ampere branch circuit supplying electric ranges, wall-mounted electric ovens, and counter-mounted electric cooking units shall have an ampacity of not less than 20 amperes and shall be sufficient for the load to be served. These tap conductors include any conductors that are a part of the leads supplied with the appliance that are smaller than the branch-circuit conductors. The taps shall not be longer than necessary for servicing the appliance.

In that case, they cannot actually be paralleled; I would suspect that they lead to different parts of the cooktop, even, as I mentioned above.

For box fill purposes -- I personally would count it as four conductors, even though only two current-carrying terminations are provided by the appliance manufacturer. It isn't five, though, because only the largest EGC counts for box fill purposes as per 314.16(B)(5).

The box fill calculation can be much higher because you're suppose to count the incoming wires too.

So you will need a box with a minimum of 20.25 cu.in or more realistically 21 cu.in Also remember there might not be a white in the incoming wire so you box fill calculation maybe 3.0 cu.in too high

I've came across this before and really didn't think twice about it. It probably boils down to being financially smarter for the manufacture.

4
wire nut alternative
2
Determine if wire in switch box is safe to re-purpose?
0
Open ground on all outlets, voltage meter beeping on metal boxes and MC cable
1
Box Fill for Line Voltage Thermostat
2
Is my plan to add a neutral wire to a switch box ok?
1
Options for current armored cable 12/2 but need 12/3
1
How do you wire and replace an old bathroom vanity light fixture
1
Replacing old 3-wire line voltage single-pole thermostat with a 2-wire one