We've got a beam that we replaced two years ago due to some damage. The beam is out front and is above all the other beams it supports, which makes the whole thing a bit strange. We made our own laminated beam, put it in place and then fastened with metal straps as was done in the original construction. The lower beams come out of the house and are attached to a short porch overhang. They travel under the big beam and connected by some more boards parallel to the front door. 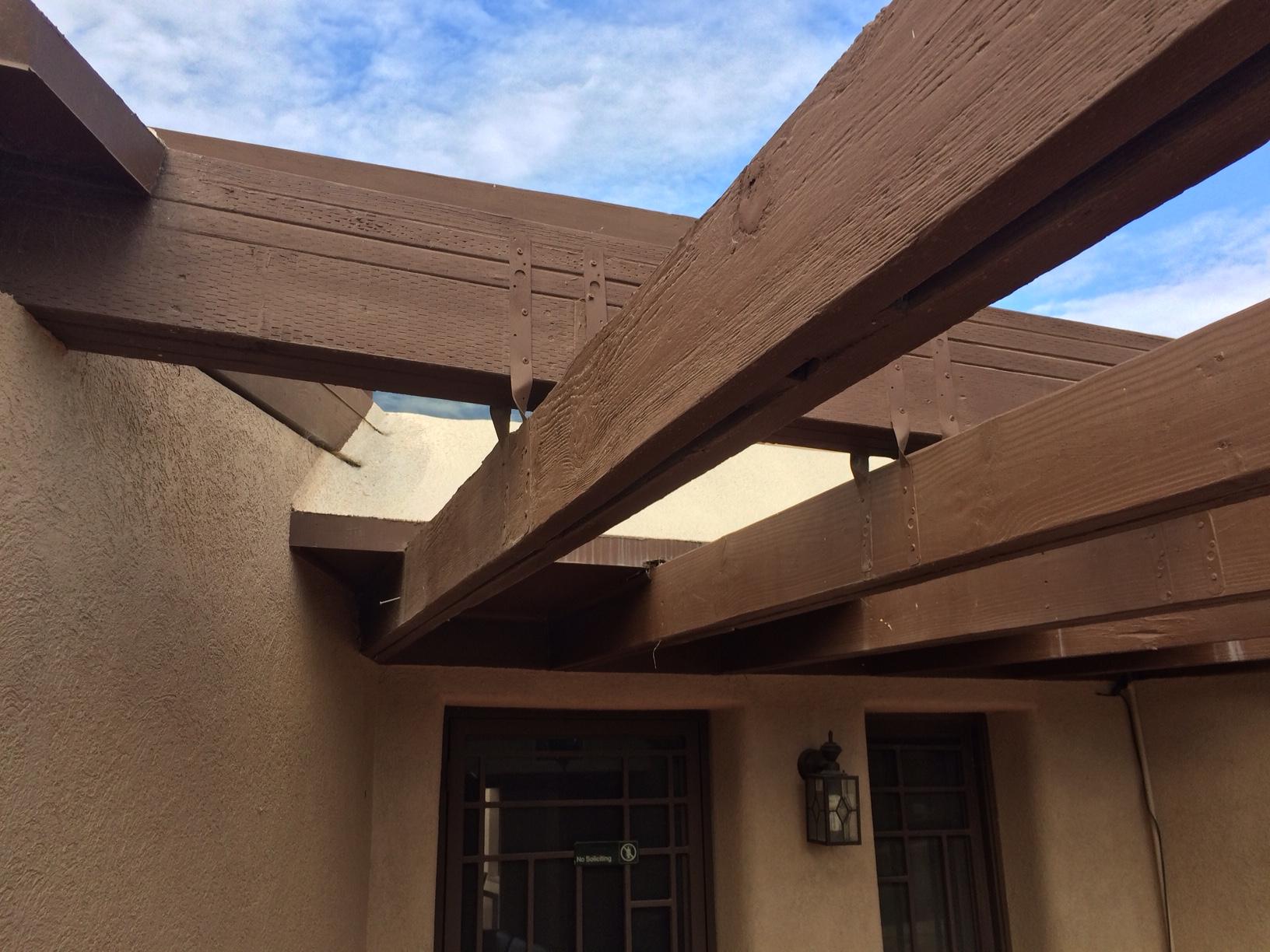 The beam has sagged in the middle and is pulling the center under-beams down, causing some separation from the porch. 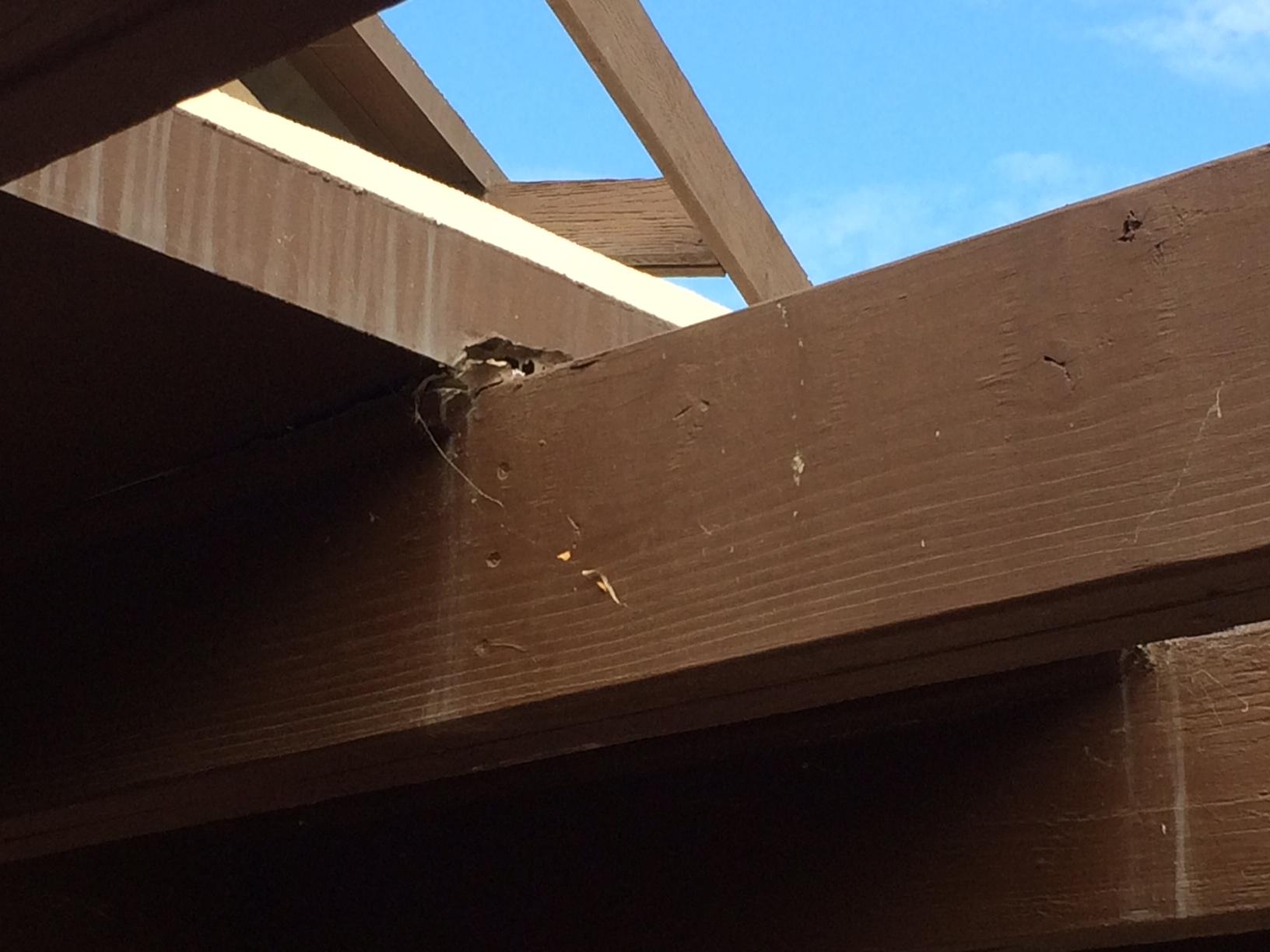 Here you can see the beam sag, a good inch or two, with the visible angle at the joint of two boards that join in line with the left entrance door. 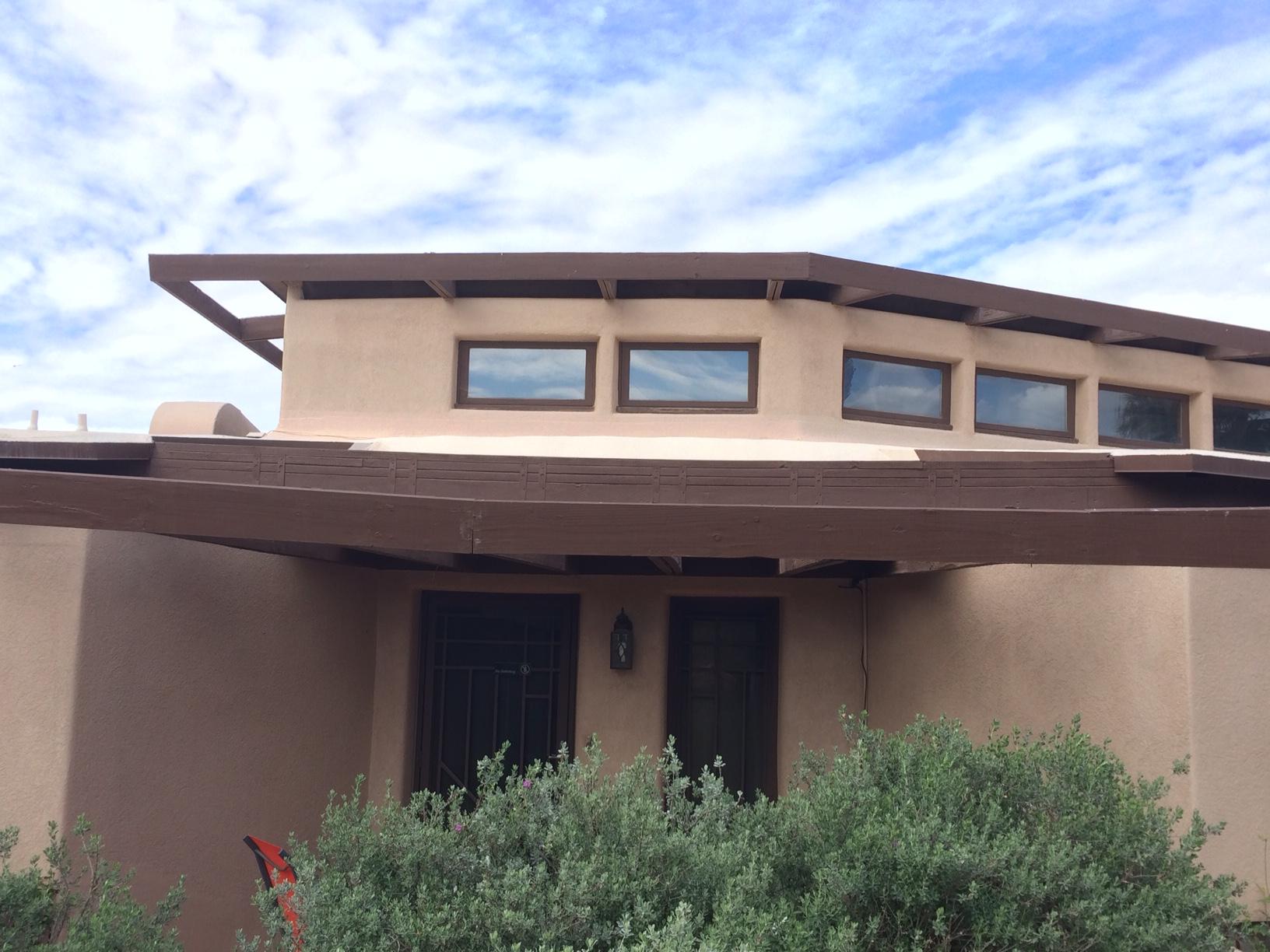 We could probably build a better beam, or buy one that is professionally done. But it seems we'll still have the issue of the bottom beams sagging after they are attached. I'm looking for some other way to attached the lower beams, so they can be pulled upwards to the proper position. Or perhaps we need to detach the lower beams, jack them up and refasten. I am able to push them back up in place with my own body power, but maybe that flexed beam is helping me a bit. My partner on the previous repair is concerned the beam will simply sag more if we re-attach higher.

One other note, the old beam had some interesting hardware installed on the main beam with adjustable bolts that attached to the lower beams. I'm assuming this was to fix this same issue. I foolishly threw these parts away a few months ago!

Thanks for any advice and fresh perspectives.

If I'm reading this right(and looking at the final picture), the beam itself is sagging. It may have reached an equilibrium point, and simply jacking up an reattaching it will fix it. But you'll still have a bowed beam.

My inclination is, a properly built beam should be able to span that distance and hold the weight without sagging. I have smaller, longer glulams spanning my basement, supporting two stories. But maybe someone who knows a bit more about structural engineering will chime in.

If you want to create one yourself, I would use like 3 2x12's laminated vertically. Boards are much stronger vertically oriented than horizontally. Think floor joists or door/window headers.

You state that the homemade laminated beam is pulling the "under-beams" down with it. Are you sure it's not the other way round? Disconnect the lam beam from the under beams and see if their deflection goes away. Either way, a beam of sufficient strength to support itself and the load of the "under-beams" will solve the problem. How bout a steel I-beam which can be covered with wood for aesthetic purposes?

I am not a structural engineer or anything like that. But if you can temporarily remove all load from the highest beam (the home-made one), jack it up so it is straight or bowed very slightly upward, and install a steel strap all along the bottom edge of it, I believe it will remain totally rigid, and provide good support for the other beams which hang from it.

If you don't want to do that, you could get a long piece of threaded rod and use that to through bolt the upper beam to the lower beam. That way, if the upper beam continues to sag, you can tune it up as time goes by. Use hot dip galvanized threaded rod. Not anything else. Cut to length and paint over the cut end to prevent corrosion. I would guess 3/8" or 1/2" would be adequate, considering that you can push it up with your hands.

This advice comes with no warranty of any kind. ;-)

Not the answer you're looking for? Browse other questions tagged carpentry engineering beam or ask your own question.

0
Attach Porch Roof Beam to Side of House
1
Partial support of a beam
0
Steel beams for 22' interior clear span
1
Replacement deck beam equivalence
3
Is there code compliant way to attach deck joists below a deck beam (or at least lower than flush with the top of the beam)?
9
Is this a sign of my roof trusses sagging?
0
How to fix sagging timber roof trusses?
0
Attaching double 2x10 beams to 4x4 post
0
Reinforcing Truss-based Garage Ceiling