How can I determine why my ceiling fan is noisy?

I have a 5-blade ceiling fan in a child's bedroom (Hunter Douglas). The fan came with the house, so I know nothing about it.

It worked fine for a year or so, but it is quite reachable from an upper bunk by the room's inhabitants. I can imagine that it has been used as a toy flinger and has been pushed and prodded quite a bit as well.

Now the unit has scraping noise when it rotates. It's not a raw metal-on-metal sound, but somewhat muted. When powered, it's loud enough to be annoying, and it's bothersome enough to the kids that they don't want the fan on, even when it's pretty warm in there.

I can rotate the blades by hand and hear the scrape even at quite slow speeds. It appears to come from one side of the hub, and it's heard five times for one rotation (same as number of blades). If I shove it sideways slightly, the sound is only slightly affected.

I don't know anything about ceiling fans. Is there anything in there that I might be able to repair, or tips about where I could start looking? Or is this something that I shouldn't try to work on?

As an update, I think I was initially intimidated by the blades. I thought removing them would be either tricky or time consuming. But I got into it and it went easily.

After I got everything apart, I found that the electronics package for the remote control had been taped to the ceiling and the tape had failed. The bundle was sitting on top of the motor housing, making a sound as it spun around. 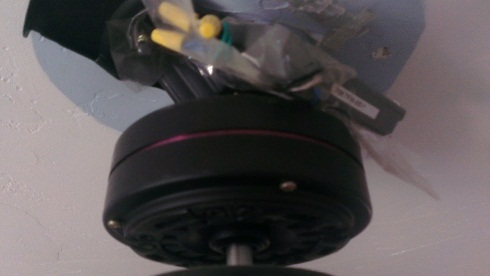 At first I would have said its just the noise of the motor Inducing the power into the windings. But since you hear the noise when the unit is off, It is obviously a noise near the bearing. Either your bearing has seized or the bearing housing assembly has been damaged.

The only thing to do is to try and gain better access of the bearing area and visually inspect. It could be the metal scraping near to the bearing assembly, but its so hard to tell.

Remediation action could involve - bending any contacting components - replacing the bearing (which will be difficult since its probably press-fit) - applying grease and lubricants to minimise scraping noise.

But once again, its hard to tell without looking.

3
How do I troubleshoot a ceiling fan that suddenly stopped working?
4
Ceiling Fan with new light kit stopped spinning
2
4 pair of cables lead to Ceiling fan box
2
What is the device resembling a capacitor in my ceiling fan?
2
Will I need to change out box to hang 16lb ceiling fan?
1
Installing a ceiling fan onto an old pancake box