I am concerned that my sump pump no longer turns on when the water reaches the appropriate level. As you can see from the picture the water level is about 3/4 the way up the inlet pipes. Which is high enough so that water doesn't really run in. Shouldn't the water level be below the inlet pipes? I bought the house last year so I am not really sure about the age of the pump. I can manually run the pump, but that doesn't really do much good if I were to get a lot of rain I would have to babysit it. Can I troubleshoot the automatic turn on by dumping water into the pit with a bucket? 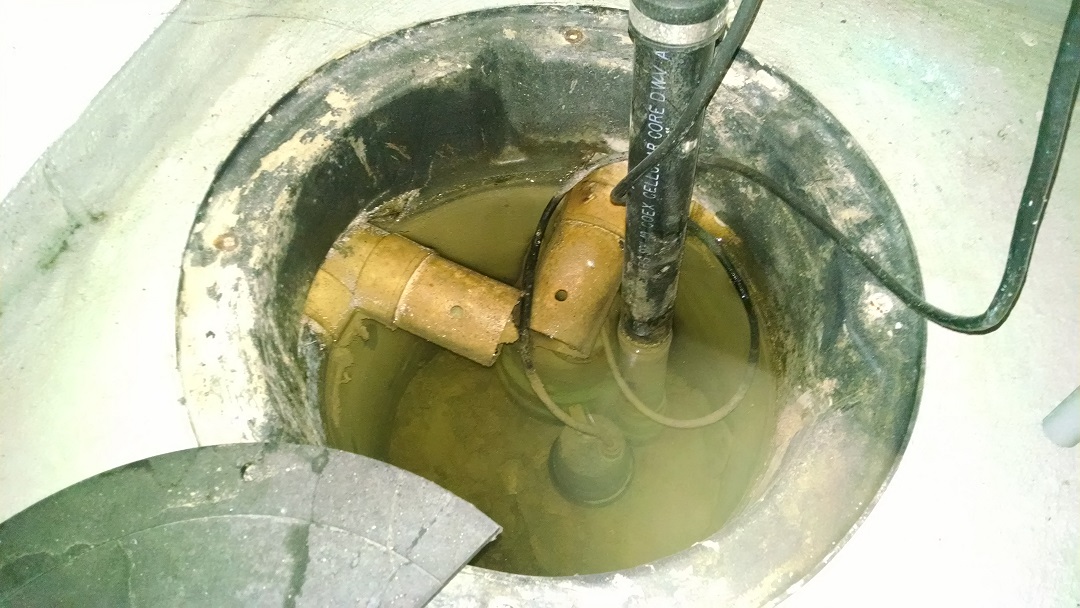 The water should not be that high in the sump. It should be down to around the 2-3" level inside. This is what I'd call a safety margin which allows the pump time to rest should there be any sudden surge of water coming in from the drain tile or where ever else it might come in from (only other place I can think of off the top of my head would be the A/C drain, but you wouldn't get a surge from there). If a pump has to pump continually without resting, it will burn up the motor faster due to heat build up.

There are two things to test. First, find the float switch which should turn your pump on when the water gets deep enough (it should be a ball floating in the water somewhere, maybe under the drain pipes). Rattle it around and see if it will turn the sump on. If it was stuck under the pipe, it may just need to be dislodged. If you rattle it around and the pump does not kick in, it could just be bad float switch, which you can get a replacement for if the main power cord runs through the check ball cord (hard to explain, but there would be a plug within a plug as it plugs into the wall).

The second thing to check is if the pump itself is good (if the check ball does not turn it on). If there is the plug-in-a-plug situation as I described above, pull the two plugs out of the wall socket, pull them apart, then put the pump one (should look like a regular plug) back into the wall and see if the pump turns on. If it does, you can get a replacement float switch and you should be golden for the mean time. If it doesn't, you'll need to replace the pump.

Unless there is a longer manufacturer's warranty on a pump, you should replace them every two years anyway. I would bet this one has not been changed for quite some time. It gives a little piece of mind in doing so. As well, if you do not keep the maintenance up on your pump and the a flood ensues where the pump could have handled the difference, the insurance company might not pay for cleanup and repairs, so this maintenance item is a must in my house.

Looking in the photo, it looks like this is a Hydromatic D-A1 which uses a Diaphragm float switch. The diaphragm switch looks like it is a older design before 2014, and these ones get stuck after a period of time(Either stuck in the on position or stuck in the off position). The newer switch from Hydromatic in 2014 doesn't have this issue. First what I would do is, with the water level up to the level seen in the picture, get a stick and push down on the Diaphragm switch(The big black cylinder attached to the side of the pump) and see if it triggers the pump. The next thing I would do is pull the pump out of the pit, and place it outside, then get a pencil/pen and stick this up into the bottom of the diaphragm switch in the center to where a hole is located and lift up the actual diaphragm until you hear a click come from it, next, repeatedly lift up and lower the pen/pencil to get the switch to activate and deactivate, and do this 5-10 times so then the diaphragm loosens itself so it activates and deactivates properly. Put the pump back into the pit and fill up with water. If the pump still doesn't activate, I would order a new diaphragm switch from Hydromatic, or for a cheaper option, get a Basement Watchdog/PHCC dual float switch.

6
There is water in my basement and the outdoor sump pump failed. What am I doing wrong?
4
How full can my sump pit get before I should worry?
1
basement sump pump water level above drain tile
2
Should I flush my sump pit with water?
3
Do I need a sump pump in my new construction sump pump pit?
0
Sump Pit Bone Dry After Running Every 5 Minutes, How?
2
sump pit not filling like it used to
1
Does my sump pump evacuate water slowly due to a perforated pail?