I want to add an outdoor light or two on an exterior wall that has no lights.

(I'm about to get a puppy and have a door out from my bedroom that has no lights. Since I live in the mountains and have seen and heard bears outside on that wall, I'd like to know for sure at 3am before going out for a puppy pee break.)

Here's a hack diagram of the situation: 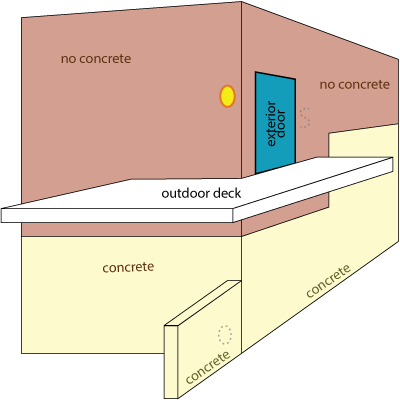 I want the lighting along the exterior face on the right in the picture.
The yellow circle is the existing outdoor light.
The dotted "S" is the interior light switch controlling the deck light.
The dotted "O" is an outdoor outlet (tucked around a low concrete wall).

Is there any way I can just run an extension cord from the outlet up to...something?

Are there any LED lights that you would consider acceptably-bright for an outdoor safety flood? And solar-powered?

Can I patch into the cord from the light switch by drilling through from the exterior?

You can run the light from the switch. This is a one hour job for an electrician. It doesn't get much faster than that.

You could run conduit around the corner from your existing light to the new light and just feed the new light off the same switch. Regular NM cable doesn't have UV-resistant sheathing and won't give you a weatherproof entry into either light fixture, and MC isn't weatherproof. But in a pinch, if you consider it temporary and if you feed the fixtures from the bottom ( so water drains out instead of filling up the fixtures) I suppose running some NM around the corner temporarily wouldn't be the most red-neck solution ever.

Other than that, and if you can't replace the fixture with one that will shine around the corner as per @Tester101's comment:

If there is a neutral in the box with the existing switch, you could tie in a new switch leg there. If insulation in the wall isn't too big an obstacle, you could drill through from the outside, above the switch where you want the new fixture. Run cable inside the wall to the switch box (use a fish tape or something rigid to guide it), then install the new fixture on the outside wall where you drilled, hiding the hole and your new cable.

If insulation in the wall is an obstacle, you could drill through the wall right at the switch box and run conduit up the outside wall to the new light fixture. You have a few options for conduit (metal, PVC, liquidtight). I'd probably just talk to somebody who knows what they're talking about at your nearest hardware or national home improvement chain store. If you use PVC, be sure to use an expansion coupling and PVC conduit straps or your conduit (or something else) will probably break when the temperature swings far enough and it expands or contracts (I've seen 1 1/2" PVC that literally snapped in two at well heads, when it cooled and contracted).

Either way, you might have to cut the old switch box out to give yourself room to work, and to replace it with an "old work" double-gang box. A reciprocating saw

can cut the nails that are attaching the existing box to the stud next to the door, if that's what you have, then you can pull the box out of the wall. Be careful not to cut any electrical wires. The old work 2 gang box would look something like the image just below. The ears in opposite corners pop up when you tighten the screws and clamp the box to the sheetrock, and the tabs in the back of the box stay attached to the box and clamp the NM cable when you push it into the box. 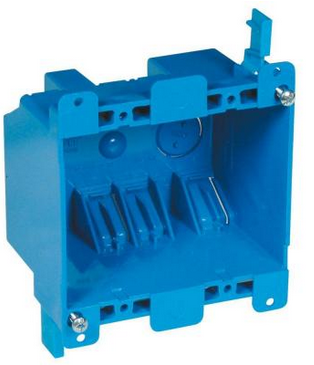 Not the answer you're looking for? Browse other questions tagged electrical lighting outdoor or ask your own question.

0
Converting an outdoor light socket into a light socket and outlet
1
Can I power an outdoor security light from a non-EV garage receptacle?
0
Add outlet to existing outdoor UF cable
1
Is there a simple way that does not involve adding more end to end wires to make this a two way switching?
0
Flickering light at outlet tester
1
How should I properly connect outdoor string lights to power outlet?
2
Extending branch circuit to outdoor shed and additional exterior outlets