How can I replace a riveted doorknob faceplate?

I've got a doorknob in need of replacement. However, the old doorknob's faceplate is riveted to a larger plate (see picture). Is the larger plate a standard part that I can buy somewhere, or is it a custom job? (Does the larger plate have a name?) I can probably drill out the rivets, but I figure that's plan B. 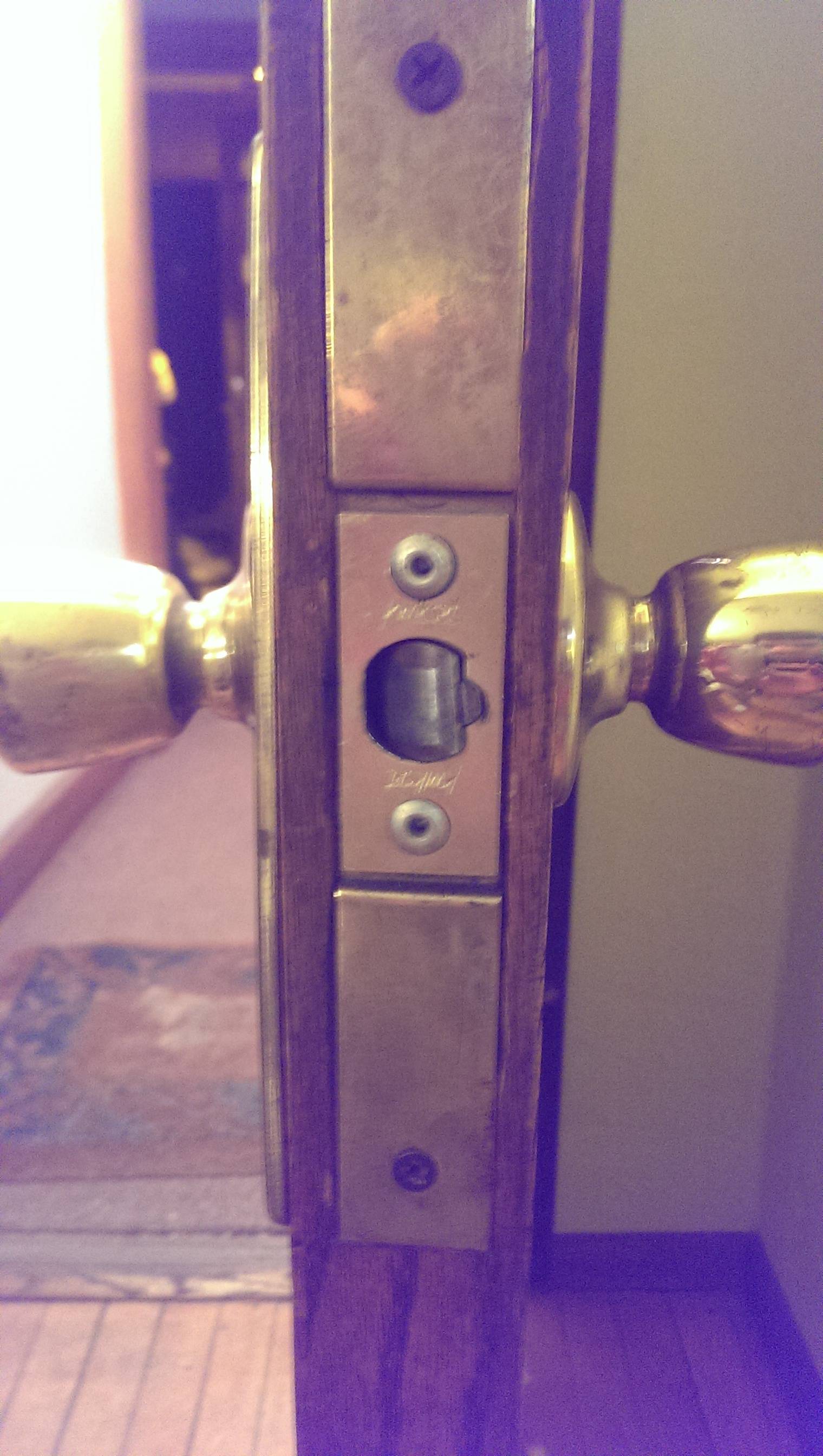 Go with plan B. The larger strike looks like either of two things, a reinforcement for a damaged mount for the strike bolt. The door slab looks ever so slightly thicker at the strike location, like the screws somehow split the door at the strike. Or the door originally had a mortise lock set and this part serves as an adapter so to get a standard knob to work in the large cut out for a mortise lock.

I really think it is the former, not the latter. Either way you need to at least reuse it, or replace it if you can find one at the big box stores. I have seen them before. It should be where all the replacement parts for old style doors are located, I do not know what it is called. You can remove it temporarily if it helps you drill out the pop rivets. Also, it may help the store guy see what you need if you want a new one anyway just to freshen up the look to go with the new knob. You can drill out the pop rivets which MAY be 3/16" but drill first with a 1/8" bit, and if it doesn't fall apart, then use the 3/16". After that you can purchase a standard bore latch set and new pop rivets and get it all back together again.

For what its worth, you could do away with reassembling it with pop rivets and go with 8 gauge flathead machine screws in a bright brass finish to match everything, and use "stop nuts" to hold it together. Get a couple of screws to replace the drywall screws to balance it all out.

If you feel adventurous and you have worked with chisels before and you are adept at it, you could add a "Dutchman" of substantial depth to do away with the secondary metal plate, and get it closer to the way it is meant to be

That door originally had a mortise lock and I'm assuming this is in an old building. It looks like someone custom made an adapter plate to put a modern bored cylindrical lock in as a replacement.

You can either find a replacement mortise lock (just do a google search and you will find lots of sites that have replacement hardware). Or you can go with your plan B and drill out the rivets.

But a warning if you go with plan B. Without the original mortise lock in the door cavity, the door will be very weak without it. If that adapter plate is only covering the hole, and not filling the hole, one kick will completely break the door there.

Not the answer you're looking for? Browse other questions tagged doors doorknob or ask your own question.

1
How do I replace a storm door when I have a cracked door jamb?
1
How do I remove this doorknob?
1
How to remove glass doorknob
1
Replacing a Novoferm garage door lock
2
Lock can be opened with credit card even when deadlatch is fully depressed
1
How can I enlarge a doorknob bore with common tools?
2
Doorknob sticks if door closes hard
0
How can I confirm that an exterior door is hollow core or solid core? And prove it to a skeptical father?
0
What should I know before trying to make a larger deadbolt hole?
1
How to rectify a heavy door?