How do I make a table drawer child-proof?

I want to build a drawer into a table that is held shut by an unseen lock (probably magnetic).

The drawer front would have two small holes in it.

The handle for the drawer would fit into the two holes, when inserted the handle effectively releases the lock allowing you to open the drawer by pulling on the handle just inserted.

Well, it's not electrical engineering just because it's magnets. I suppose an active version could be made, but there is this option: 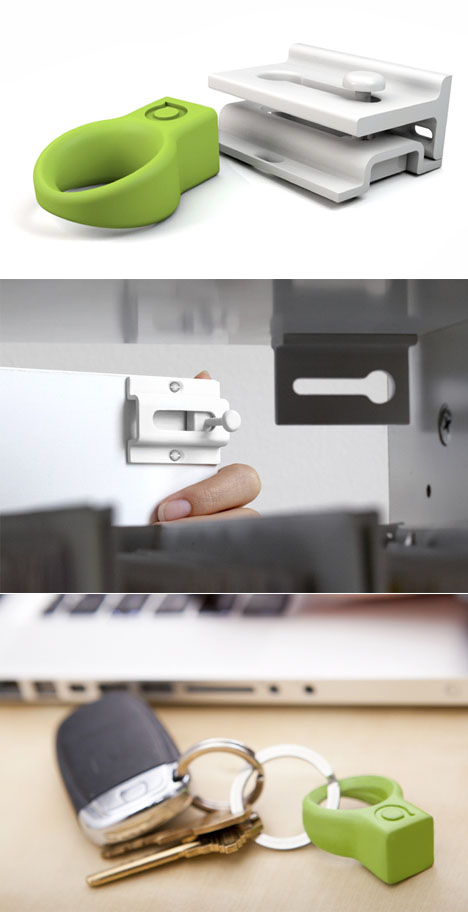 It doesn't appear to be available for purchase, but it doesn't look difficult to build.

Lee Valley Tools Secret Magnetic Door Lock is available on-line and sells for about Can $9.00. However, the picture may give you ideas of where else it might be available.

Lee Valley Tools does ship worldwide if you wish to purchase from them. FWIW - I think very highly of that company - they sell very nice stuff at premium prices but everything they sell is top-notch. They also stand behind the products that they sell and are very easy to deal with if you should have a problem.

Answering the original question: the off-the-shelf answer a locksmith would give you is probably an electric strike or electric deadbolt, of the same sort used on doors.

A maker would probably suggest just using a spring-loaded solenoid directly as the latch. (That's what's going on inside the electric strike, though with some mechanical engineering wrapped around it for strength and reliability.)

If you want to control this from electronics rather than simple switches, you'll need a driver circuit appropriate for the solenoid. (Relay or equivalent plus a few components to make that friendly to the transistors. )

... I also highly recommend the Tot Locks (currently sold by Safety 1st, I think) . That's a magnet-operated latch, sold for childproofing but useful for other purposes too. It's just plastic so it can be forced, but it's strong enough to keep kids out until they're old enough to understand magnets and action-at-a-distance, and strong enough to constitute a Very Strong Suggestion to your nosy relatives that they aren't supposed to open this cabinet or drawer.

(I was giving these out as baby-shower gifts for a while, having been able to pick up a case ar below-wholesale price. Universal reaction was that these were the only latch that held up to determined and clever toddlers.)

No connection with the product, just a happy user.

1
What latch would work best for a front/top opening chest?
8
How can I fit a Schlage lockset in my front door?
5
Stuck building craftsman style coffee table
1
Replacing a Novoferm garage door lock
0
Courtyard Gate Lock
1
My door was locked but the handle came off, uses non-traditional unlock
3
How to child-proof a floor vent?