How do I wire a light switch and outlet in the same box?

I have a single gang box in a bathroom with a GFCI outlet. I'd like to replace it with a 2-gang box containing a GFCI outlet and a light switch for the vanity light. The outlet will have both receptacles live (not switched).

The vanity light currently is not switched; it is controlled by a pull-chain on the light itself. We're going to replace it with a non-pull-chain type of light and we want a switch where the kids can reach. It'll be nice not to have to explain to our guests how to use our bathroom, too.

I did some poking around and it looks like the vanity light is fed from a different branch from the receptacle.

One plan is to pigtail the switch and gfci outlet onto the supply line, and then take the output of the switch out of the box up to the vanity light.

Another way to do it would be to run a switch loop from the lighting fixture down into the 2-gang. The gfci receptacle would be wired the same as it is now, and the switch would be on the switch loop.

Is one of these the correct way to do it? If not, how should I wire this?

Since your light is on a different circuit than the outlet, you'll need to run a switch loop from the light to the 2-gang box using 14/3 (yes 3) cable, with black as the hot, red as the switched hot, white as a spare neutral, and the bare or green wire as well, the ground (aka EGC) :)

After transposing the existing GFCI from the old 1 gang box into the new 2 gang box, you'll want to leave it alone from here on out. To wire up the switch, you connect the brass screws to the black and red wires, the green screw to the EGC, and simply wirenut off (i.e. put a wirenut on the exposed end of) the neutral on the switch loop -- it's there for future use by say a motion sensor or lit switch as per 404.2(C) (neutrals are called 'grounded conductors' in the NEC, btw, if you're a Code newbie and scratching your head at this :):

C) Switches Controlling Lighting Loads. The grounded circuit conductor for the controlled lighting circuit shall be provided at the location where switches control lighting loads that are supplied by a grounded general- purpose branch circuit for other than the following:

Make two whips from the hot one for the outlet and pne for the switch. Just splice the neutrals together with only one whip since the light switch doesnt need a neutral. Heres a diagram i drew 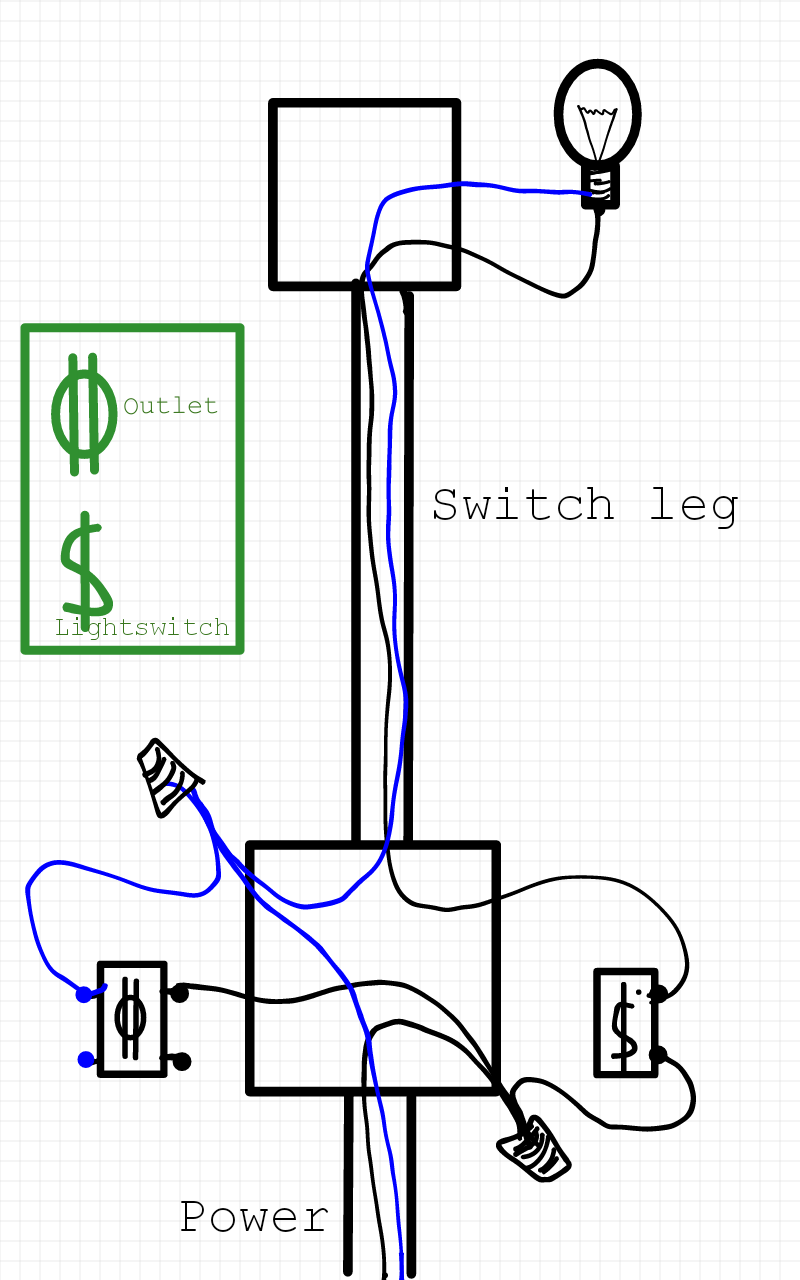 You have the right idea. The outlet itself, since you want it unswitched, is wired as normal. On the other side of the outlet, where you'd either chain to another or add something additional, is where you'd link the light in. So, the hot coming off the outlet, you'd wire up to the in on the light switch. The "out" on the switch would go to the light fixture. For the neutral, you'd take the white coming off the outlet and link it up with the fixture. Make sure to connect ground if there.

If you did the switch before the outlet, both would then be switched.

I did the same thing last year. Sorry to be lazy but I found via Googling your topic, some folks had done line drawings that were helpful. Why I didn't link to one is that depending on your experience, one might be better than the other.

Not the answer you're looking for? Browse other questions tagged electrical wiring switch gfci receptacle or ask your own question.

0
Upgrade from outlet/switch combo to GFCI + outlet
0
Taking power from double light switch to GFCI outlet
1
How to wire 3 switches and a receptacle in a two-gang box
1
Safe location rules for bathroom sink receptacle and light switch
3
How-to wire a Fan/Light in Bathroom with power at Switch box and Fan/Light box
0
How do I wire one outlet and two separate light switches in a three-gang box?
1
Wiring Diagram for Double Gang Box - Double Toggle Switch + GFCI Receptacle
0
2 white wires and 1 black wire in an outlet box?
2
How to Wire a Light, GFCI Outlet, Switch and 2 Outlets on a single circuit