I will explain what I would "Ideally" want. I would like the HVAC in the basement ceiling to Not require a soffit. Plumbing seems possible because the holes for the most part will be small enough to not affect the structural integrity. So the question is what is possible?

There is also a similar post here. They talk about the limits on what can be done to floor joists. From my understanding, it would not be possible to install any ducts through the floor joists. If I am wrong, please let me know.

Last would be what is the alternative? Is it possible to run the ducts through the roof attic? (I assume that opens a whole different set of issues) Plus that doesn't fix the cold air return which should be on the bottom if I am not mistaken. I would really like to avoid soffits if possible but everything I am researching is pointing that direction.

EDIT: The house is an existing home. The basement floor to ceiling is already at the 8' mark. The joists are typical dimensional lumber (not engineered)

Radiant/Hydronic Heating - The idea is awesome. If I was doing a new construction, this would probably be one of the best options.

"low-volume, high-velocity" ducted system - First time I have seen something like this. Its very interesting. I did read there are some disadvantages like noise and it can be costly to add.

To Clarify a bit more, I would like to keep the costs low so redoing the entire heating/cooling system is probably not going to be an option. (of course it depends on what costs would be). I intended to keep with the conventional heating/cooling and was more or less looking for a way to still it but avoid soffits. The image below is an example of what I had original wanted but it doesn't seem like that is up to standard?

EDIT-Image below is a not my current hvac. Its also a BAD way to do it. Was using it as a reference. 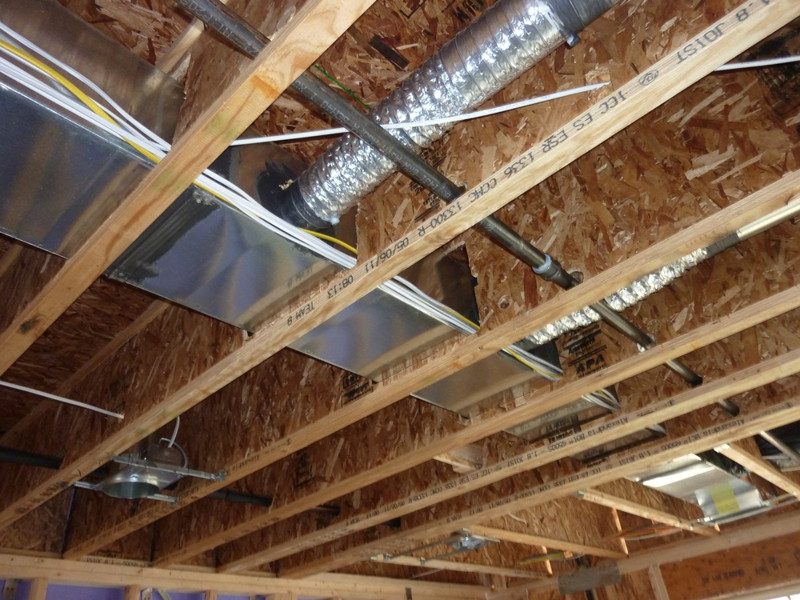 You could put in a non-forced air heating system - ie, hydronic or radiant, using water in pipes to deliver heat. You could use mini-splits for A/C only or for heat and A/C. You only need space for ducts if you need ducts, and there are plenty of houses without ducts...

Edit: you may be able to work with a wide, shallow duct so you can have a broad, not too deep soffit for the cross-joist duct run. Just be sure to get the sizing sorted out correctly (ie, a 12x12 duct cannot be replaced by a 3x48 duct (same area), as there's a lot more friction in the 3x48, but the correction factors for duct shape are surely available so you could pick a size that will work. It will cost more, but it may resolve your issues with soffits if you don't have to duck under them.

One option would be "low-volume, high-velocity" ducted system (manufacturers include SpacePak and Unico) that uses a series of small 2" diameter ducts to distribute air. Depending on the size of your joists, 2" holes may be acceptable. As @Ecnerwal mentioned, mini-splits can be a good option too. 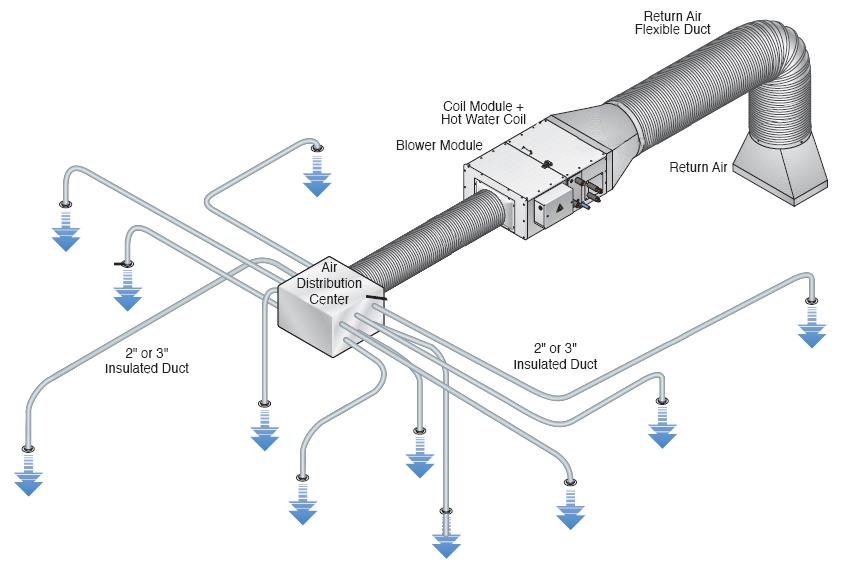 Not the answer you're looking for? Browse other questions tagged hvac joists ducts or ask your own question.

8
How can I improve second floor HVAC performance?
1
Is having a branch off the end of main heating HVAC duct bad and if so, why?
1
How to HVAC service 3 floors without ducts in roof?
2
Should I insulate metal duct work in basement?
1
Cut Floor joists for HVAC
1
Do my HVAC ducts need to hang away from floor joists?
0
Floor Sag at Return Duct