Wet Wall with plumbing on both sides

I plan to be adding 2 bathrooms side by side. Is it possible to do 1 wetwall with all the plubming in it? I attached an overly simplified image as an example. 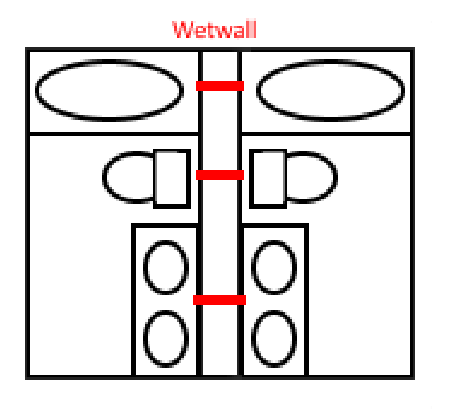 Sure, it's done all the time. Thickness of the wall will likely be determined by the required vent size. With two toilets, two tubs and four sinks, I think you'll likely have to go to a 2x6 wall if you go with a single vent stack, but you'd have to run the numbers.

I did run into a code issue with drains T'ing into the main vertical stack at the same level. Still not sure what the issue was, but the made me change it.

As far as accessing it later. If everything is properly pressure tested before you close it in, you should be fine. But stuff happens. The odds of it happening are inversely proportional to how easy it is to access the area. So if you had an access panel there, it would never leak there anyway. Mostly joking, but seriously - if you have a problem, you may have to break into the wall. No fun, but unlikely and not the end of the world.

Not the answer you're looking for? Browse other questions tagged plumbing bathroom design or ask your own question.

5
Is this an appropriate drain design for adding a shower?
0
basement plumbing
4
Need guidance for venting a new rough-in for basement bathroom
2
What is the plumbing diagram symbol for a water hammer arrestor?
4
Repairing leaking DWV vertical 3" thin wall PVC
4
House has no plumbing vent — is this a solution?
3
How to best reconfigure this plumbing for cabinet replacement
0
Is it possible to seal a leak that's coming through a fitting?
0
Bathroom addition with separate vent stack and new line
2
How do I add a utility sink drain into a tight space?