How to fasten boards flush to the face of square posts

I might take 3 square wooden posts, about 1.5 meters high, and I need to link them to one or more boards on the bottom, if you propose screws, keep in mind that it has to sit level so they have to be flush. There also needs to be a board on top but that's not nearly as critical as that's not where the lateral force applies I think.

It might have to hold like 6 kg at that height and not break if there is some lateral pressure due to a fat cat propelling off the top of the stand, assuming the base is large and heavy enough not to move in this situation.

At best what I have at my disposal are a drill with drills bits of various sizes and an electric wood saw, and I don't have a way to keep a complex structure still while drilling into it.

Dowels look nice and easy because everything can be drilled separately on a table and then assembled but maybe they are too weak. Self tapping screws are another option, but I'm not sure I can do the countersinking properly and put washers in the hole to prevent it from breaking the board and coming up through it laterally if it's thin and there is a lateral force applied on the post. I'm not using fibreboards but it might be as weak as pine.

Also I don't see how it's possible to keep everything still while screwing in the screw with a drill, the post might rotate around and then it can't be put straight anymore. Still, options can be suggested if you think they're much better.

Glue sounds weak but I have no idea really.

Mortise and tenon and other such stuff - I don't have the tools nor the expertise for that.

Visible metal L-brackets are too ugly.

So the main issue is how deep wood dowels or screws would have to go through the post to be safe, but if you have alternatives do tell me.

You have a few options available to you, based on the material which you find.

Provided that I understand how you want to assemble the structure you can do the following. 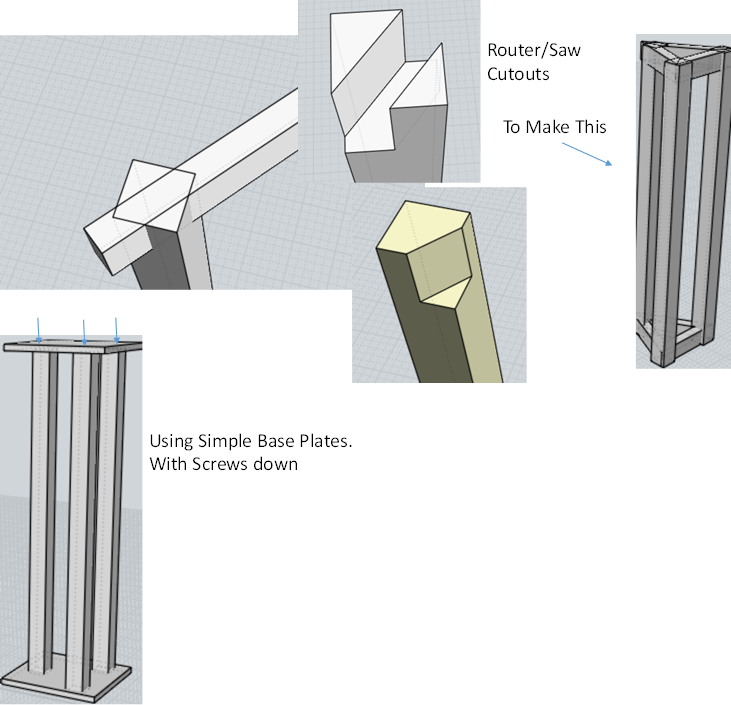 The easiest would be to use a "deck bracket" or a "post bracket" available at your local DIY store: 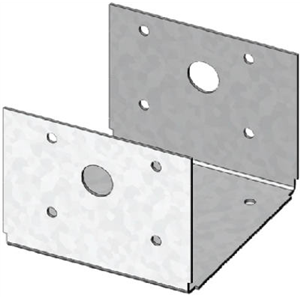 If you are worried that the screws would tear through the thin particle board of the bottom of your speaker, then I would first screw the post bracket to a 20cm x 20cm (8"x8") or larger square of 12mm (1/2") plywood, then use that to screw or glue to the bottom of the speakers.

I'd rather make this a comment on Hightower's answer, but I don't have the reputation. I also don't have access to a tool for drawing nice pictures right now.

For simplicity, I would recommend screwing through the base / top into the legs, with the following caveats:

1) You will have to countersink holes in the base / top material, which means you have to make a hole that is slightly larger in diameter than your screw head, and deep enough for the screw head to be below the surface of the material. This is not difficult, because the depth does not need to be precise. It doesn't matter if it's a little too deep. Drill your pilot hole (the diameter of the screw shaft) first, then use that hole to guide your larger drill bit. Don't worry about a washer.

2) You are screwing into the end grain of the legs, which is relatively weak, and as you stated there is some possibility of the screws tearing through the base material. Make the base and top out of high-quality plywood, baltic birch if you can get it. Don't use MDF. You could apply some glue to the end of the legs before you screw them on. If you really want it bombproof, see below.

3) The legs will want to twist when you are driving the screw. Make sure you pre-drill a hole for the screw, then use a manual screwdriver to drive the screw. You'll need the kind of screw that doesn't have any threads near the head, so it turns freely in the base material. Once the leg is snug up against the base, you can hold the screw steady and twist the leg to align it perfectly. If you glued the leg, it shouldn't twist again after the glue dries.

4) For extra security, put crossbars between the legs. Sort of like in Hightower's diagram, but without the nice joints. If the legs are the corners of an "L", then the crossbars are the lines of the L. Countersink holes in the legs and the end-grain of the crossbars, then glue and screw as above. Then you can drive screws through the base into both the legs and the crossbars. When you're screwing into the crossbars, you're going across the grain, so it's stronger. It would also effectively lock the legs together so they share the load.

4B) You'll have countersunk holes in the outside of your legs if you do this, but you can just putty those up, especially if you plan on painting this thing.

That all being said, you could also buy a pocket-screw jig and clamp, and just put two pocket screws into each end of each leg. Use the clamp in one screw hole to hold the leg steady while driving the other screw. You still have to be careful with your base material.

Not the answer you're looking for? Browse other questions tagged wood screws support speakers joinery or ask your own question.

2
What header joist sizes do I need for a loft bed?
5
Can mortise and tenon joints be strong without glue?
3
How to drill a hole in the wood without an electric drill?
1
Compound mortise and tenon joints on corners (ie. legs of a table)
3
Metal door/ wood screws
3
How can I fasten a threshold to concrete?
0
Edge-to-endgrain butt joint
0
HardieBacker with Hydrodefense very difficult to drill
0
How to fasten/glue plywood flooring to joists