How Do I Take This Old P Trap Off Cast Iron T?

I have a house built in 1958 and I'm replacing the bathroom vanity and sink with an IKEA unit that needs plumbing close to the wall. I have a new P trap, but cannot take this old P trap off. It appears to thread directly into a cast iron T inside the wall. It is not a compression fitting like I first thought. I have applied some PB Plaster and tried to unthread it, but it is just getting crushed.

My other option is to cut it off, and try to work with what is sticking out, but it got beat up trying to unscrew it. 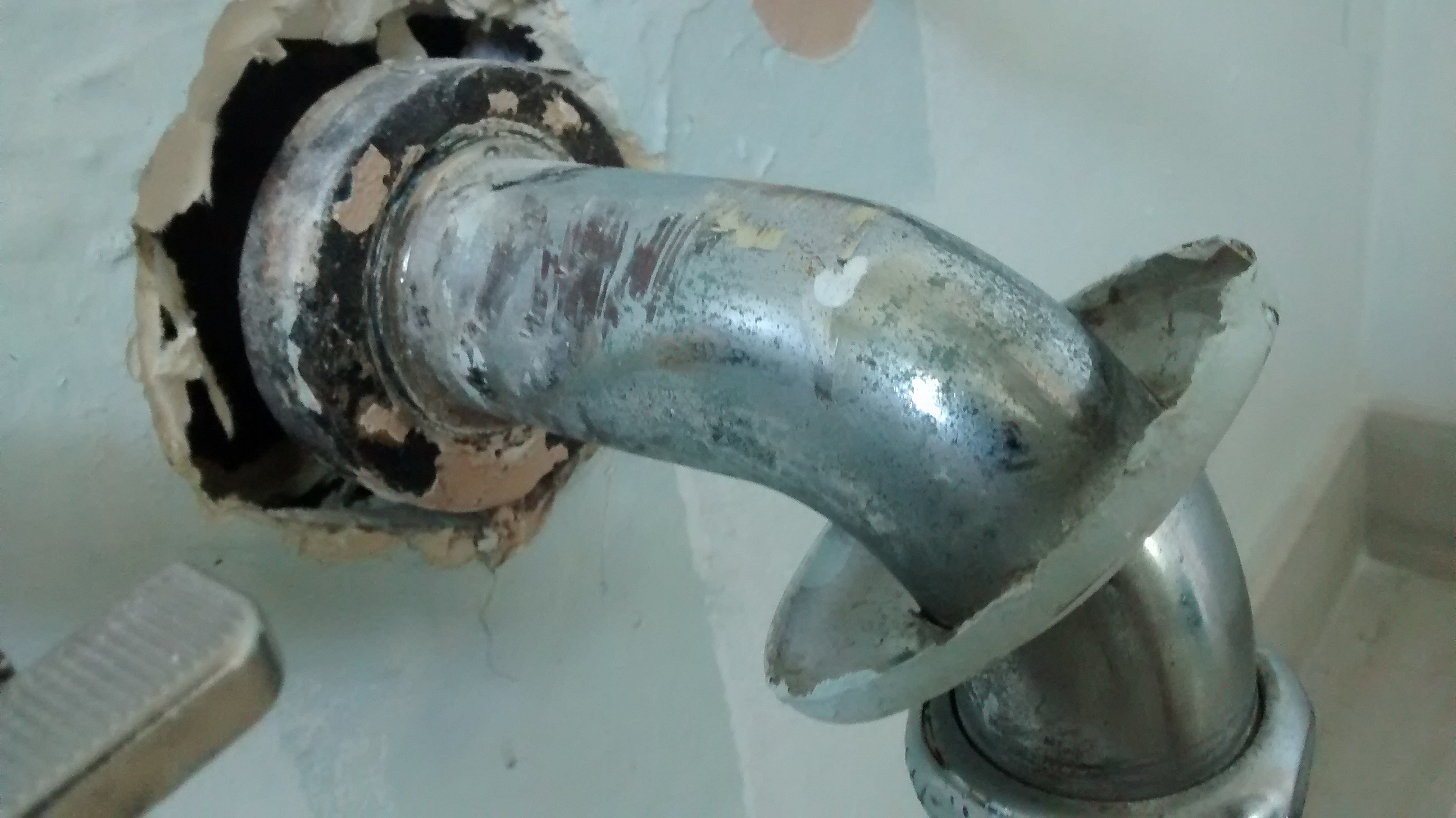 Close up of the T, it is one cast part: 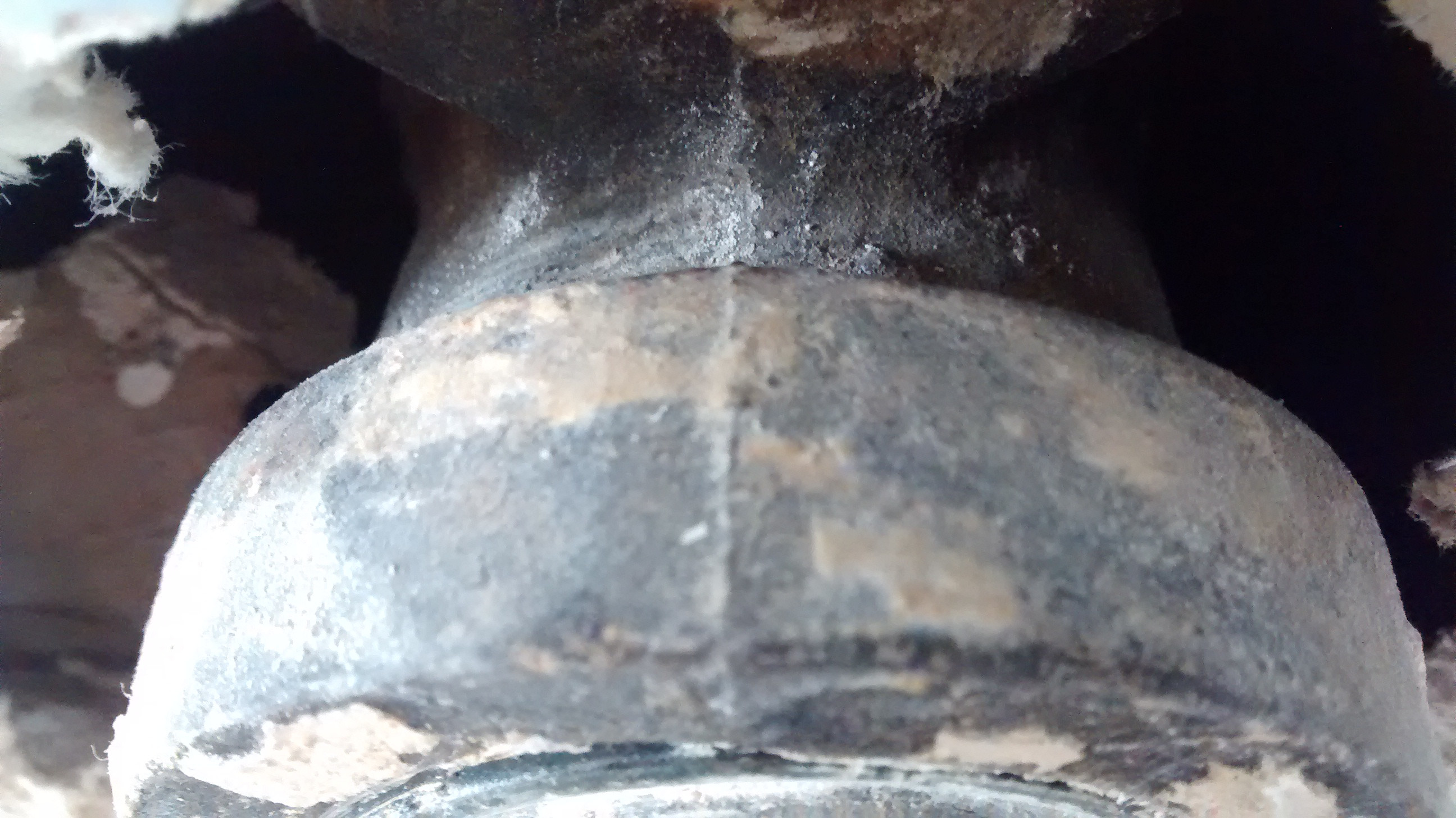 I'm coming in a little late to help the OP, but wanted to add some clarification in case anyone else runs into this situation. I used the procedure outlined below dozens of times when I was a repair plumber in the 80's.

The trap arm going to the wall is 1 1/2" OD tubular drawn brass (usually chrome plated). It's going into a cast iron "sanitary tee" in the wall, with an inlet that has 1 1/2" female IPS (iron pipe size) threads. The original connection was made with a so-called Marvel Adapter, which is a brass ring with 1 1/2" IPS male threads on the outside, and a smooth 1 1/2 ID inner surface that was soldered to the tubular brass trap arm. It does tend to look like some kind of leaded joint because all that's visible is the edge of the ring/adapter and the excess solder from when it was sweated on.

To remove it, first break out the old trap arm (as the OP said he accidentally did) - often a few hammer blows is all it takes, but sometimes you need to cut it off flush with a Sawzall or hacksaw. The OP's 3rd picture above shows it in this state.

Next, insert your Sawzall blade (with fine metal-cutting teeth) or the end of a hacksaw blade into the opening, preferably near the top, and make a small cut going outward. You'll be cutting through the relatively soft brass, but you should stop cutting when the sound and feel changes once the blade starts to hit the cast iron threads. Now move your saw blade over about 1/2" and make a second cut just like the first one. Then use a flat-bladed screwdriver or small chisel and tap out the 1/2" section of the brass ring you just cut. Then use the same tool to drive the rest of the ring loose - drive the screwdriver tip under one end of the remaining ring until it bends inward sufficiently far that you can grip it with a pair of pliers. Then you should be able to easily un-thread it the rest of the way out.

Now you'll have some nicely intact threads in the cast iron tee you can use. I like to use an old 1 1/2" galvanized nipple with a few axial grooves cut through the threads as a "thread-chaser" to clean out as much old rust and gunk out as I can - the first 3 or 4 threads that were in contact with the brass ring should be fine but it's a good idea to try to clean up the deeper threads too.

Now you should be able to thread an ABS or PVC male adapter into the cast iron threads (using some Rectorseal #5 thread sealant or equivalent). If you can't get a good "bite" with the plastic male adapter, you can thread a short galvanized nipple in there instead, then thread a plastic female adapter onto that. Glue in whatever length of plastic (ABS/PVC) pipe you need, and then a regular compression-ring trap adapter or whatever else you need to connect your trap.

Here's what that Marvel Adapter looks like new. These were real common 50+ years ago:
https://www.ferguson.com/product/sioux-chief-marvel-brass-marvel-thread-adapter-ring-s274/_/A-ProdFamily-216152

I have never seen a P-trap with threads like you have here. If the metal is still as thin as any other P-trap out there, you may be able to drive something like a chisel down into the pipe length-wise, not to cut it but to crush the pipe down so it folds the threaded section down into the interior diameter of the P-trap, pretty much allowing the threads to disengage the interior of the cast iron. Be careful on this the cast iron is durable and can take some abuse as long as the chisel doesn't hit it directly. What you need to be wary of is the movement the cast iron does while striking the P-trap. The joints are poured lead on the fitting and a little movement may make them leak.

Hi thanks for the answers, apparently I didn't have notifications on so just saw them now.

Apparently it was not threaded on. I found this out when I broke it off trying to unscrew it. After some searching online on what I was dealing with, it was a chrome plated brass part that was soldered with lead to a cast iron hub. I found some ways to get the lead out and then put a donut in to transition to ABS but it seemed like a lot of hacking.

As stated above, the best way seemed to open the wall and replace the whole section with ABS. So I chickened out and hired a plumber to do just that. After seeing him do it, and my wallet empty out, I think it would have been pretty manageable to do, had I not chickened out. 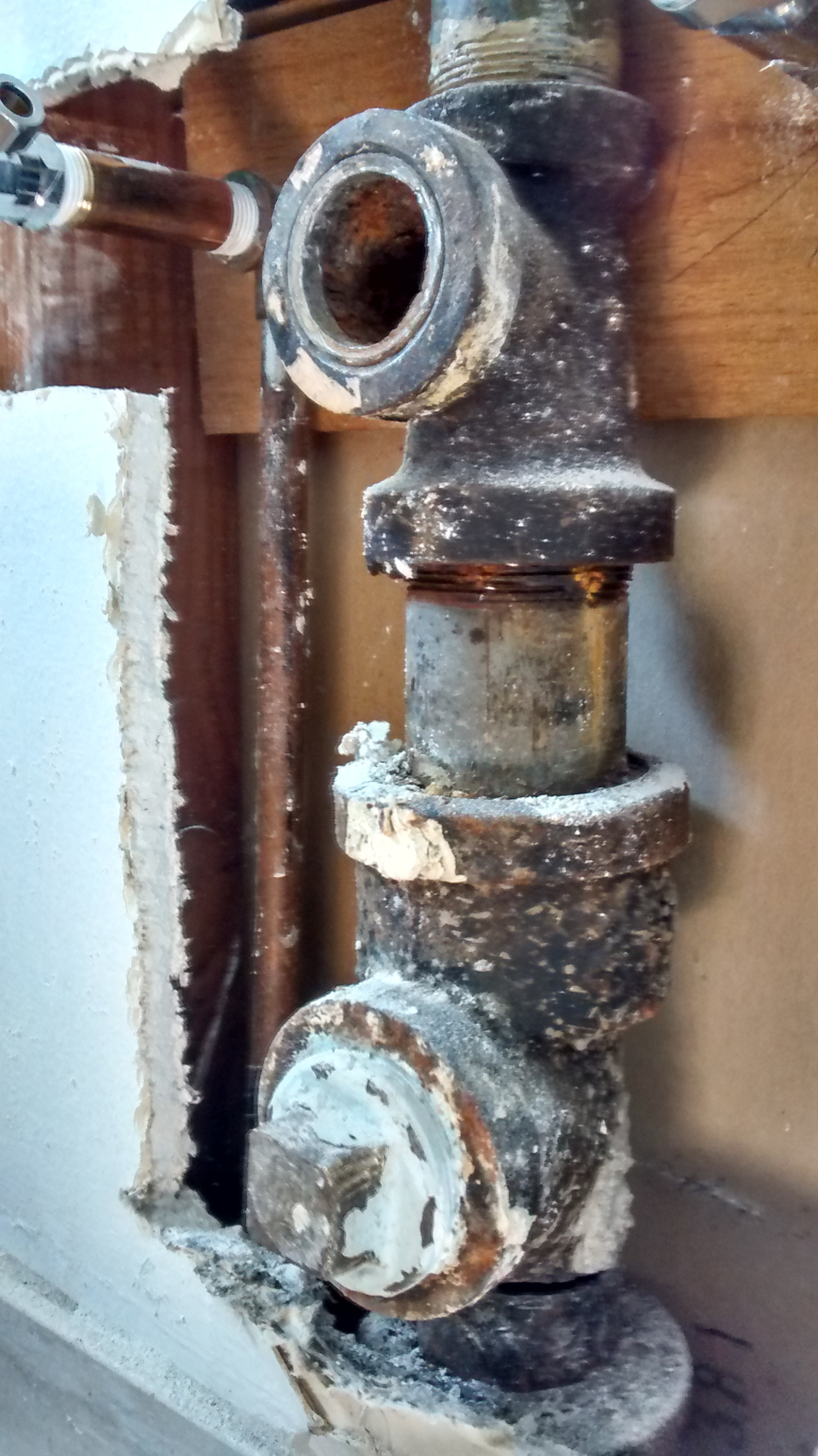 And here is after: 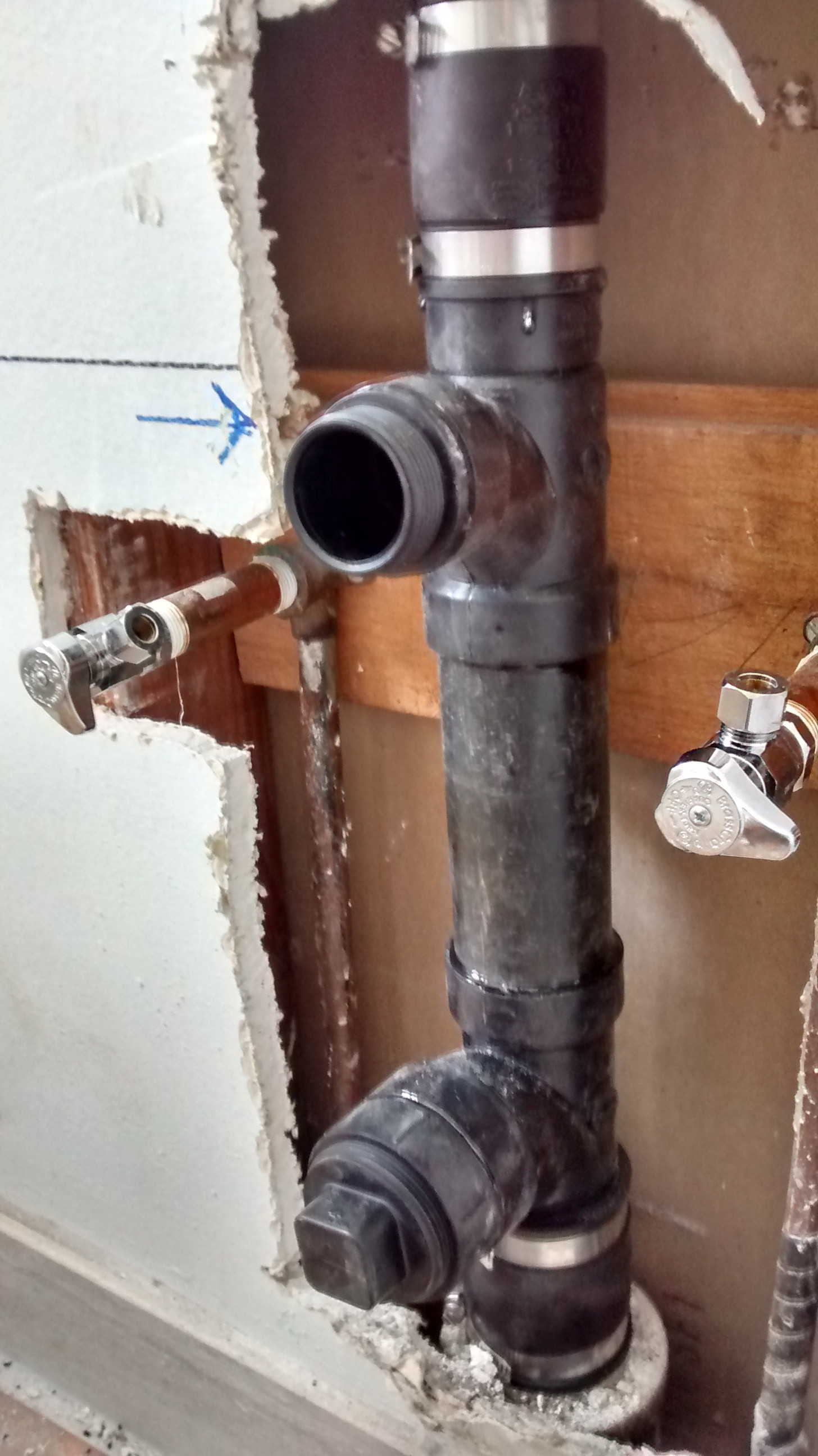 I had the exact same set up. I yanked out the old chrome pipe and was left with the old lead solder. It was a silver colored ring that was about a quarter inch thick. A propane torch wouldn't melt the solder. So I then drilled a few holes in the solder and knocked out the lead solder ring with a small chisel and rubber mallet. The iron hub was threaded and accepted a 1 1/2 inch iron pipe.

I see that the plumber came in and cut open the wall and added a rubber coupler (sometimes know by the brand Fernco) on both ends. Something to consider in the future would be cutting the part in the wall off in the middle and attaching the rubber coupler there. You can then transition to PVC if you so desire. I've had to do this for some of my chrome P-traps that have shattered when I try to get into the trap itself to clear a clog.

Below, I just bought a PVC P-Trap kit and rubber coupler. A little hacksaw work and it runs great (I didn't even have to replace the vertical drain pipe). Best of all, it's hand-tight now so cleaning the trap is easy. 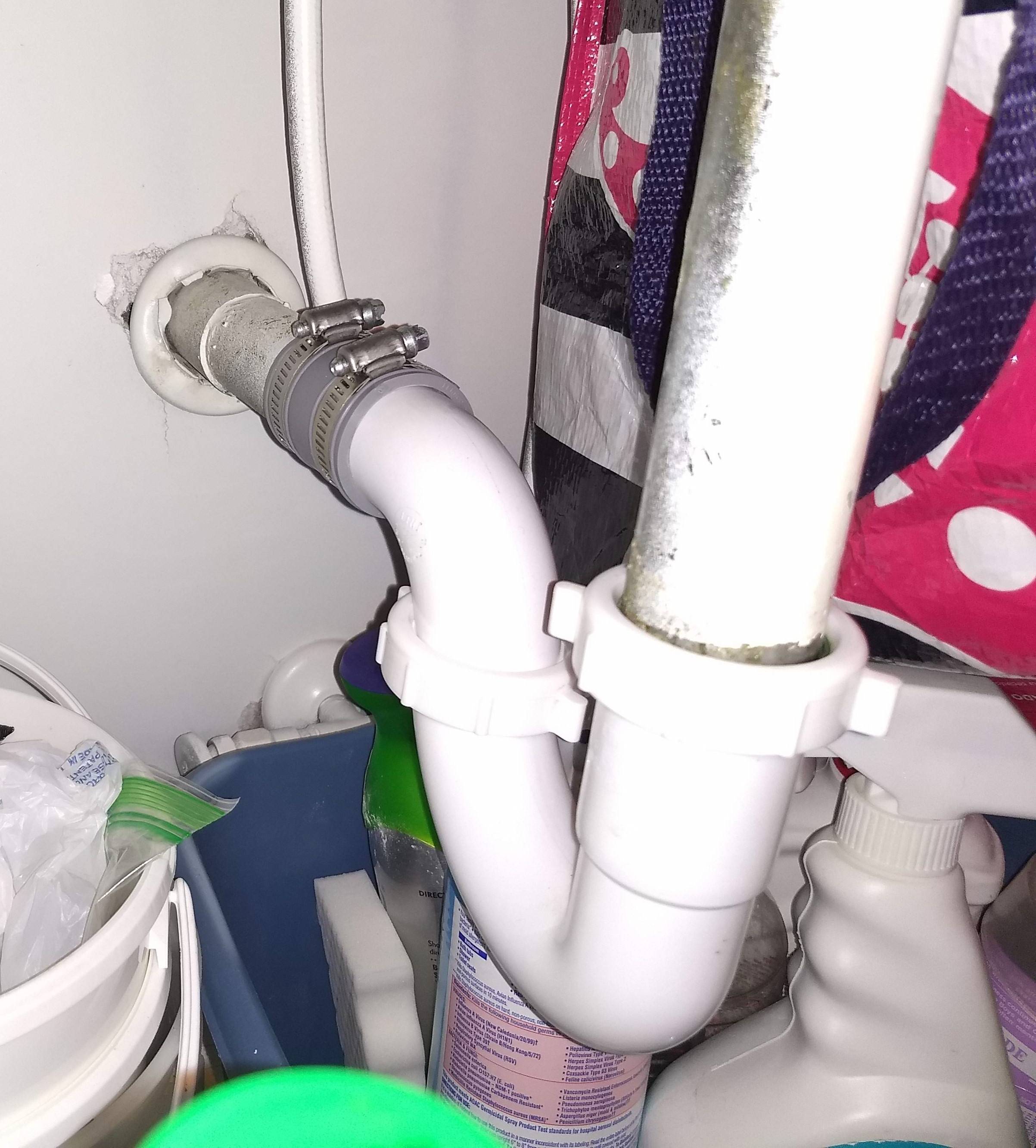 5
Should second trap under kitchen sink S-trap be there?
3
How do I reroute my existing bathroom piping for a pedestal sink?
2
Fix lead joint between cast iron and galvanized steel plumbing pipes?
0
How do I repair this friction ABS kitchen sink pipe fitting
1
How should this vintage wall-mount sink be mounted? Does not fit standard cast iron brackets
0
How to connect plumbing to a trap adapter which is already installed?
2
Bathroom Sink Tailpipe and P Trap do not line up horizontally
0
1.5 inch male thread drain coming out of the wall. How do I connect a plastic p trap on it?
1
How to mount an antique cast iron sink
0
Removed old vanity and installed new vanity and there is limited space to install new P-trap