How can I figure out why my bedroom light won't turn on?

I changed the bulb though it was good still. I changed the switch. From the breaker box it goes; bathroom light, hall light, bedroom light, porch light. All other lights work just fine.

But note that you need to test the wires going to the fixture, not just the fixture itself. You are ruling out the fixture as the cause of the problem.

If there is power going to the wires connecting to the fixture (with the correct light switch on), then you have found your problem - the light fixture itself.

Third, if power is not going to the wires that attach to the fixture, then you know at least that it is not the problem, or not the only problem (the fixture could also be bad, but you have another problem somewhere else as well if no power is coming to the wires).

If there is not power going to the wires connected to the light switch, but like you said the lights are wired in serial (one after the other), then since there IS power going to the bedroom light like you said, which you mentioned is the fixture before it, and the switch is wired in serial AFTER the bedroom light fixture, then your problem is the wire between the bedroom fixture and the light switch for the porch light; or, perhaps the wire is detached from the previous fixture.

If it is not in serial like you said but wired in parallel, then it is a little bit more complicated to find, but it should be pretty intuitive from here and this it a good starting point for you either way.

Update: I made a quick photoshop for you to help visualize. This is of course assuming it is wired in serial like you said in the same manner, but this is effectively how you will go about troubleshooting. Just change it a bit if it's wired differently, but this should answer your question fully.

I put a question mark with an arrow to the points of failure. It could be

Here is a quick photoshop of this hack. Please use common sense and don't shock yourself. If you do this, screw each loose wire on top of the other wire, ON the light switch where it screws onto it. This will prevent the wire from flopping around. Be sure to put electrical tape on the loose end of the wire so they don't hit each other while you/re getting situated and blow the fuse or shock you while hanging. 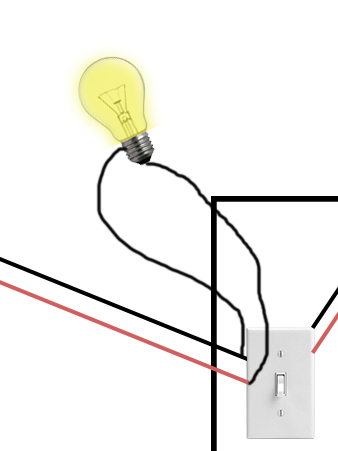 If it lights up then the wires are fine and it's one of the things between the switch and the porch light. If it doesn't light up then the problem is either the wires or the connection to the previous fixture.

You can also test the voltage with a voltage meter but may not be necessary, although this is the better and safer way.

Not the answer you're looking for? Browse other questions tagged lighting bedroom or ask your own question.

0
replaced ceiling light wont turn off
0
Light fitting had water in it - bulb has been removed, and the switch is off, but breakers for the downstairs light circuit won't turn on
1
Light won't turn off, is there a short?
0
Can replacing LED light bulbs cause electric faults somewhere else in the house?
0
After Lamp Blew and Circuit Breaker Popped Light Won't Go Out