My house has forced air HVAC. When I finished the basement, I used a closed cell foam insulation that worked very well. The basement will get only 8 degrees cooler than the first floor during a time when it's zero F overnight. Now that my family is spending more time down there, they are asking for a bit warmer. 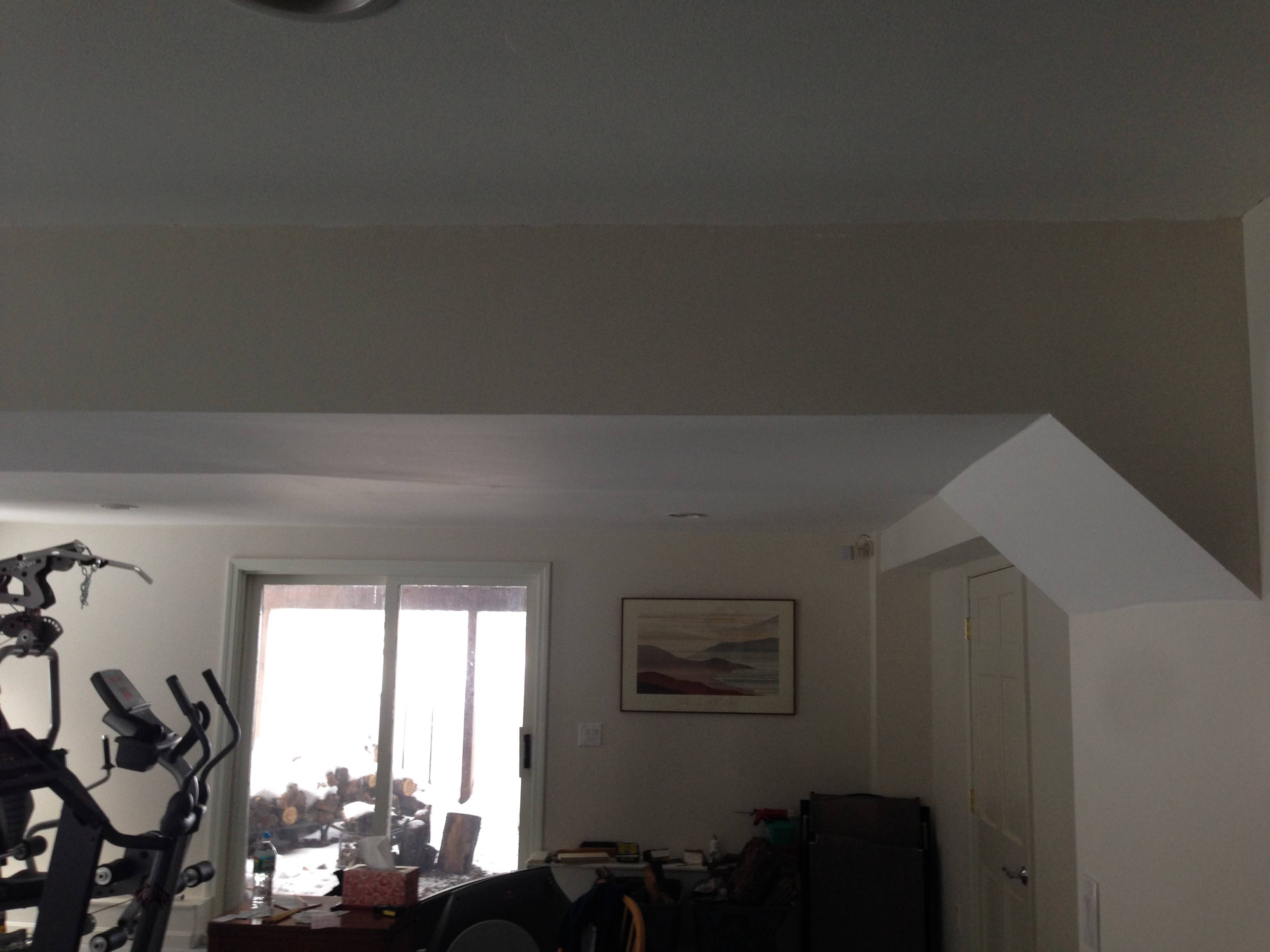 This is the duct I want to tap into, 10-1/2" high, 24" wide measured over the drywall. There are 2x4s wrapped around the duct to hold the drywall. I'd like to put 2 vents on it. This leads to my questions.

All the metal duct pieces I see at Home Depot assume a connection to a round duct, and in fact, this is how this huge box ultimately feeds the floor above it. This seems to tell me that what I'm about to do isn't really ideal. So, right here, I'll ask for an alternate suggestion. But if I'm willing to risk having that room above give up some air flow, what's the best method to physically produce the vent holes here?

The second choice to add a few degrees would be a baseboard mounted electric heater. This is what I use in a room over the garage where the airflow was ok, but it was too big a fight against the garage being not insulated, so the whole floor was freezing. At least here, we're just talking less than 10 degrees to warm up. And it's only during the freezing cold snaps.

Last, in the summer the basement is as cool as the first floor, even on hottest days.

Update - that side? Metal beam. Instead, I put a ceiling vent 12x8" on the underside. 24 hours later, the room is 5F cooler than 1st floor, from the 10F it was prior. Yes, it's a trunk to feed vents on the first floor, but the loss isn't noticeable. My next step is to pop one more 12x8 and see what difference is left. A space heater can be usedfor a few degrees delta, but 10 was just too much.

You may look into installing a vent in the furnace room if you have one next to that area. This may allow you to draw heat from the furnace room, into your finished basement area, up the stairs to the first floor and back down again. Depends on where the return is and how things are "zoned".

If you do install on the drywall get as low as possible so the heat sweeps across your comfort area to the nearest return. Heat rises... Install dampers so you can tweak the amount cool feeding into the basement during the summer. Follow the path of airflow and calculate as much as you can. In tools such as Revit (warning: steep learning curve) it is called a load analysis; though, it can be done back of the hand.

If you already have a ducted system, I wouldn't install an electric heater. Nice for a small area such as a desk/bathroom, but do keep in mind how they affect humidity.

Not the answer you're looking for? Browse other questions tagged hvac heating ducts or ask your own question.

4
Recommended proximity of HVAC vent to return air
1
Stop heat loss through unused chimney duct
1
Central Air duct does not blow
8
How can I improve second floor HVAC performance?
0
Safe to put old white paper-backed fiberglass insulation on metal ductwork?
3
Is this open supply duct in my vented crawl space necessary?
1
What is the purpose of these ducts in HVAC/laundry room ceiling?
0
Supply duct still condensating in basement