I have a 1940s house located in Indiana (no hard water). I'm doing a tub/tile replacement with 100% Dreamline Shower Kit, and Delta Single Trim T17255 hookup with shower head ONLY. This house is like 95% galvanized with a spatter of copper replacements lines.

I would like to join the bathroom shower with new copper at the trim valve hot/cold/riser, and run the same straight down to basement. Where it joins in the basement, a spider web of galvanized pipes (7/8") engulf my basement, starting from the water heater. Is it healthy and advisable to replace galvanized and connect NEW copper?(Yes, I STILL have the Cast Iron FUGLY pipes in Basement!)

I DO NOT have the money to do an entire sweep of replacement galvanized. I plan on using "L" copper for horizontal and vertical lines from the valve down to connect to galvanized.

It's really hard to read your question, but I think you are essentially asking: "Is it okay to replace galvanized pipe and connect it with copper?"

The answer is yes, but there are a couple things to keep in mind:

Copper and galvanized pipe will suffer from galvanic corrosion where they meet unless they are isolated. This requires use of a dielectric union 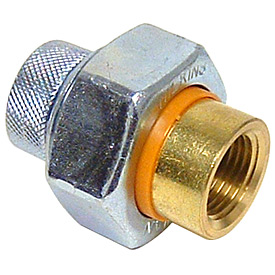 Galvanized pipe also is generally cited has having a 40 to 50 year lifetime. Generally they will rust from the inside out, restricting the flow in the process. 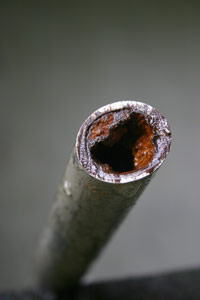 This restricts the flow, and is often the reason that older homes have such poor water pressure. It would be a shame if you get your new shower installed and then find out the pressure is awful, and it could very well be that it is the galvanized supply lines and not the shower itself.

There is also the possibility that there are metals leeching out into the water supply from this corrosion, but to know if this is happening for sure you'd have to get your water tested.

Once you start seeing corrosion on the outside of the pipes, it's just a matter of time until you have a leak. I've actually hard of some home insurance policies not covering damage from leaking galvanized pipes, so that might be worth checking out.

There's also no reason you have to use copper, pex is a perfectly valid option, and for replacing a long in-wall run it's significantly easier to install than copper (it bends, and comes in spools up to hundreds of feet long).

1
Can I replace a section of copper pipe with flexiable PVC?
0
How can I connect copper pipe to an unthreaded, galvanized pipe?
2
How can I attach new connections to this old galvanized pipe?
1
Compression fitting with copper nut and plastic pipe keeps leaking
0
How to determine the sizes/arrangements of supply pipes?
2
Strapping down a copper pipe with little access
3
How to Replace Old 1/4" In-Line Copper Water Filter?
1
Replace corroded copper water pipe
0
Is a mix of copper and galvanized pipe a problem if dielectric unions are used where they meet?