Does the NEC limit the maximum size of junction boxes?

In this question, the OP has constructed a large junction box out of several extension boxes attached to a "regular" junction box: 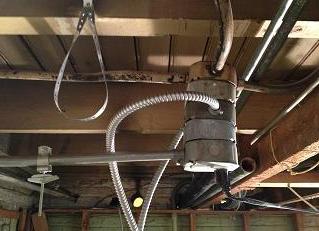 Is there any upper limit on the size of a junction box (either as-built, or expanded)?

There is no limit on SIZE - I've worked (in non-residential settings) with some you could sit in.

The practical concern with the "box and 4 extensions" shown is that the wires up at the ceiling are supposed to be able to come 6" out of the open face of the box, IIRC. From a practical working point of view it's usually better to put in a large box you can work in rather than a bunch of small extension boxes, but mostly code wants adequate volume, and adequate wire length, and does not mind a bit if you have more volume, or have made it awkward as shown.

Personally, if I need more room than an extension on a 4 or 4-11/16's box gets me I'm going to throw in a 6x6x4 or an 8x8x4 rather than construct a cluster-bleep like that. But I'll use a 4 inch and one extension quite happily, especially when it's way cheaper than a single bigger box (though I am always slightly befuddled that the extension costs more than the box does.)

Both orange and blue borgs (not a particularly good source of electrical supplies beyond the very run of the mill) stock up to 10x10x4 (400 cubic inches) at my local stores. Real electrical suppliers can get much bigger ones, but your wallet will prevent you from going there unless you actually need to.

Of course, most houses have at least one fairly large junction box, the center of which is full of circuit breakers ;-)

There is no limit to the size of electrical junction or pull boxes, nor to the number of box extensions that can be used, but section 300.14 of the National Electrical Code states that at least 150 mm (6 in.) of free conductor, measured from the point in the box where it emerges from its raceway or cable sheath, shall be left at each outlet, junction, and switch point for splices or the connection of luminaires or devices. Where the opening to an outlet, junction, or switch point is less than 200 mm (8 in.) in any dimension, each conductor shall be long enough to extend at least 75 mm (3 in.) outside the opening.

6
Can I use metal masonry device (switch) boxes in a stud wall?
4
NEC, use more extension boxes or an access panel?

5
How to tell if a ceiling junction box is braced to hold the weight of a ceiling fan?
6
How can I safely extend a wire in my electrical panel?
2
Can I install junction boxes in a closet, and if so, what kind of box?
4
NEC, use more extension boxes or an access panel?
1
Ok to have junction box hidden behind recessed lighting?
3
What exactly does 'Maximum of 8 No. 12 AWG Branch Circuit Conductors' mean?
10
Why can the connections of a recessed light be buried in drywall, but not junction boxes?
1
Does the lighting fixture size change the number of allowed wires in a junction box?
3
Ground wire from the junction box
1
Can you have 2 junction boxes on one 12/3 cable run