I've read up on three way switches, and have replaced a few over the years. I recently installed a bathroom fan, and so had to replace two three way switches. Very simple setup - two switches, one fixture with four lights. As soon as I looked at the old wiring, I got confused. After removing the switches, I did some testing. Each switch box has a hot line coming in. By that, I mean that with no switches installed, each box has a hot pair into it. The only thing that I can figure is that it was a Carter system, as that is the only diagram that I have seen with hot/main into both switches. A little disturbing, as this house was build in 1970, and Carter hasn't been code for ages.

Is my assumption correct? Is Carter the only one with main/hot to both switches? If so, what do I do from here? I'd rather not wire up another Carter setup.

Additional information: I've attached a picture with what I've discovered. My next task (tomorrow) is to open up the fixture and see how it is connected. It seems like 3 way switch in box 2 was wired in series with the rest of the circuit. 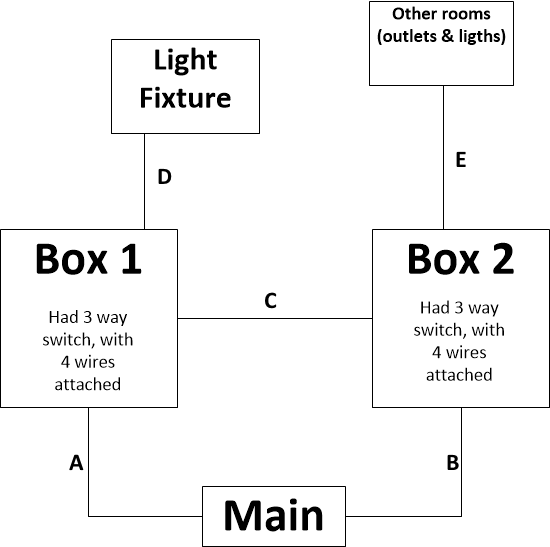 I had to admit defeat on this one. I wired up the new switches in exactly the same way as the old. It works, but I still don't understand it. At some point I'll revisit and rewire. Thanks to everyone for their help!

It's possible that you are detecting residual voltage from the neutral through the lamps at one switch (in the order of 50V often), you can use a multimeter in voltage mode and see how much voltage you actually detect. Or take out the bulbs from the fixtures and check again.

Other wise you can (with the breaker off) connect 2 wires at one switch then check continuity of the wires at the other end (with a battery and little bulb for the poor-man's checker). If the non-lives are those that connect on both ends then it's fine.

There are a few possibilities.

Perhaps the hot-and-neutral pair coming up cable B are merely passing through box 2 on their way to cable E, and they don't connect with the 3-way switch at all. In that case, cable C would be a 14/3 (or 12/3) containing 2 messengers and a common, in the usual style.

Perhaps you have a Carter 3-way system, which has been illegal since 1923, but some electrical "genius" might have "reinvented" it. This would require "hot" and "neutral" to be present at both 3-way switches, but would only require a single wire in cable C.

In the 1960's/70's (in Canada at least) it was normal to run a three wire with two hot lines to save on wiring, even if you removed one of the hot lines, there was still another that was live.

Have you traced back both lines to the box? A three wire with this setup will have both the red, and the black line connected to separate breakers.

0
Adding a two-way circuit to a three-way circuit
2
Three-way from two panels
1
Why would three-way switch travelers both show as hot?
1
Can I safely disable a three way fan switch to use for providing ground to remote three way box?
5
What is the proper way to convert a pair of three-way (SPDT) switches into a single two-way (SPST) switch?
3
Light Fixture Stopped Working After Replacing Its Three-Way Switch
3
TWO ORIGINAL SWITCHES - ONE three-way and one single cant figure out wiring for SAFE UPGRADE
2
Three way switch circuit leaking voltage
1
"Wrong" wiring for three-way switch
2
Bizarre behavior after replacing a three-way switch