What should I do to increase the dimming range of LED bulbs?

We started doing most of our homes in LED last year. I am a big dimmer fan and would pretty much put a dimmer on any light switch. One thing that I haven't gotten down is the dimming range of the LED vs what I am used to with the incandescent lights. To me when I have LEDs all the way at the lowest setting they are still at 60-70%.

I understand that most new dimmers have an adjustable switch for the dimming range and I have tried setting these to low.

What I would like is a recommendation on the type of bulb (or what to look for in dimmable LEDs) and the type of dimmer switch? The end game is to get the LEDs to react more like the traditional dimmed bulb so that you can go from mood lighting to flood lighting.

Note: I have done an array of testing over the past week with 3 different dimmers and 6 different bulbs. I found that the dimmers made little to no difference. The bulbs made a bit of a difference but not close to an incandescent. What is funny with the bulbs that did the best... they blinked when turned all the way up.

I'm in same boat. When I redid the house I'm in, I installed as much LED lighting as I could and the rest is halogen. What I've learned is, dimming range is based completely on the driver in the LED bulb. And most LED bulbs will only dim to about 20-30% of there maximum.

I'm sure you know how dimmers work, but for those that don't it is basically a super fast switch turning the light on and off very quickly. In incandescent bulbs, this works perfectly providing a nice smooth dimming range. In LED/CF's it is a nightmare for them to deal with. To get around it, they actually have to have extra circuitry to interpret the on/off pattern and then use that to control the brightness. During the on phase they pull extra power to provide power to the light during the off phase as well. For LED's, the driver reduces the voltage to the LED elements but never actually turns them off. So what normally would be dimmed to almost nothing for a incandescent, is pretty bright for an LED because it's pulling 2-3x as much wattage during that on phase to keep the capacitors charged and the light going.

TL;DR; For LED's, you have to look for high end bulbs that actually list their dimming range.

Now hopefully we will not be stuck for long with incandescent analog dimmers driving digital bulbs. There are a couple of standards trying to gain traction for pure digital dimming. These work by actually never dimming the power but instead sending a digital signal on the power line to tell the bulb to dim. Think philips hue bulb being controlled by a light switch instead of a wireless hub. But right now none are on the market for consumer level products.

The LED is the most dimming-friendly light source ever made. The problem is that most people are using screw-in "incandescent replacement" LED modules, with obsolete dimming schemes** intended for incandescent lights (which just don't have the refinement to perform well in the low range). This is the ugliest hack in electrical design, and produces ugly-hack results.

If you're such a big fan of dimming, you should investigate better ways to dim. There are several.

A native, raw LED will dim flawlessly, with extremely refined levels of control. Right out of the 'chute, there are two control methods that will work extremely well. One impractical for the casual hobbyist, the other readily accessible.

Dimming by current limiting. Raw LED emitters must be current controlled or they will fry themselves. This is done by a driver circuit that outputs a specific current, varying the voltage to hit that current. LED spec sheets all test and rate them at specific currents. But the spec sheet lists a maximum current -- you can run them at any lower current. And if you do, brightness will be roughly proportional.

A particular LED emitter might have a spec current like 350ma, and a maximum current at 1400ma. If you send it 35ma, you get about 1/10 spec light. At 3.5ma, about 1/100 spec light. 0.35ma, 1/1000. I've driven a 3000ma, 36V array at about a milliamp and gotten a tiny amount of light out of it, just enough to tell what color the emitter was. There's no limit to how dim you can go, provided the driver can go that low, and you have the manufacturer's job of matching driver to LED emitters, heatsinking the emitters, building them into a viable product, etc.

Building a custom current-limiting driver is beyond the light hobbyist, but you might find commercial LED drivers which do this for you, e.g. using a 0-10V dimming system (the type used in commercial lighting).

Dimming by Pulse Width Modulation. A lot of 12V LED products simply use a resistor for current limiting. This involves underrating the LEDs somewhat - they can't run at peak performance - but it also means you can turn the LEDs on and off very, very, very fast. This allows Pulse Width Modulation dimming -- the light is at 50% brightness because it's on 50% of the time. 1% brightness because it's on 1% of the time. The full duty-cycle occurs hundreds of times per second, far too fast to see. PWM dimming is easy for hobbyists using 12V resistor-based products and cheap, off-the-shelf hardware available all over eBay, Amazon, in stores, you name it. Top brands like Leviton are even making modules that "play well with" PWM dimming.

A dimmer or RGB controller makes the pulses, with enough force to directly drive a considerable amount of LED light - like 130 watts (about 700 watts of incandescent). If you need more, gadgets called amplifiers can drive lots more.

So if you don't like how "low" the commercial PWM dimmers/controllers can go -- it's well within a hobbyist's reach to make your own controller using an Arduino or Raspberry Pi. And feed the Adruino's weak output into an off-the-shelf amplifier to control the lights proper.

There are also commercial dimming technologies. One example is the "0-10V" system. In this, the dimmer sends a signal (0-10 volts obviously) on a separate cable to LED driver modules which understand that signal. And then, they can go as dim as the driver design allows. (the LED itself provides no lower limit). So it's just a question of finding a quality fixture or driver that takes 0-10V for dimming.

Smart switches/controls are another way to solve this. In this case, they use either a) communication wires, b) a radio scheme, or c) modulating signals over the power line, to communicate between a smart dimmer and the smart LED lights. It's a digital signal that says exactly where to set the brightness, so in theory, this is a viable way to get any brightness the driver can handle. Of course, this can be botched in implementation, either with a driver that doesn't handle "very dim" well, or with the digital "notches" being chosen too coarsely.

** Obsolete dimming schemes such as leading or trailing phase control, like these ratty old obsolete things listed on this page. Those dimmers are designed with a MANDATE to be backward compatible with incandescent - in fact on

This is a complicated topic because it's very subjective, and also humans' perception of brightness is very inaccurate (non-linear).

Among the many difficulties in comparing LED dimming to old-fashioned incandescent dimming:

I know this site discourages specific brand recommendations but I have some Philips BR30 lights in my living room and they dim down pretty well (not the color-shifting variety I mentioned above). I also have some Cree LED bulbs and those don't seem to dim as much.

Apparently, here is one switch to get: Lutron TGCL-153PH (TGCL-153PH-WH for white). This has a front-mounted dial to set the minimum dimming output, so you can tweak your LED/CFLs where you want them. The dial is then hidden by the face plate. I actually haven't tried these, but will do that this week. They are available on Amazon, Home Depot and Lowes, and they max out at 150 watts, which is fine for most LED/CFL installations (or 600 watts for incandescent/halogen bulbs). And they are described as "single pole/3-way" as well. They cost +/- $20.00. There are also Lutron decora-style dimmers with similar adjustment dials. 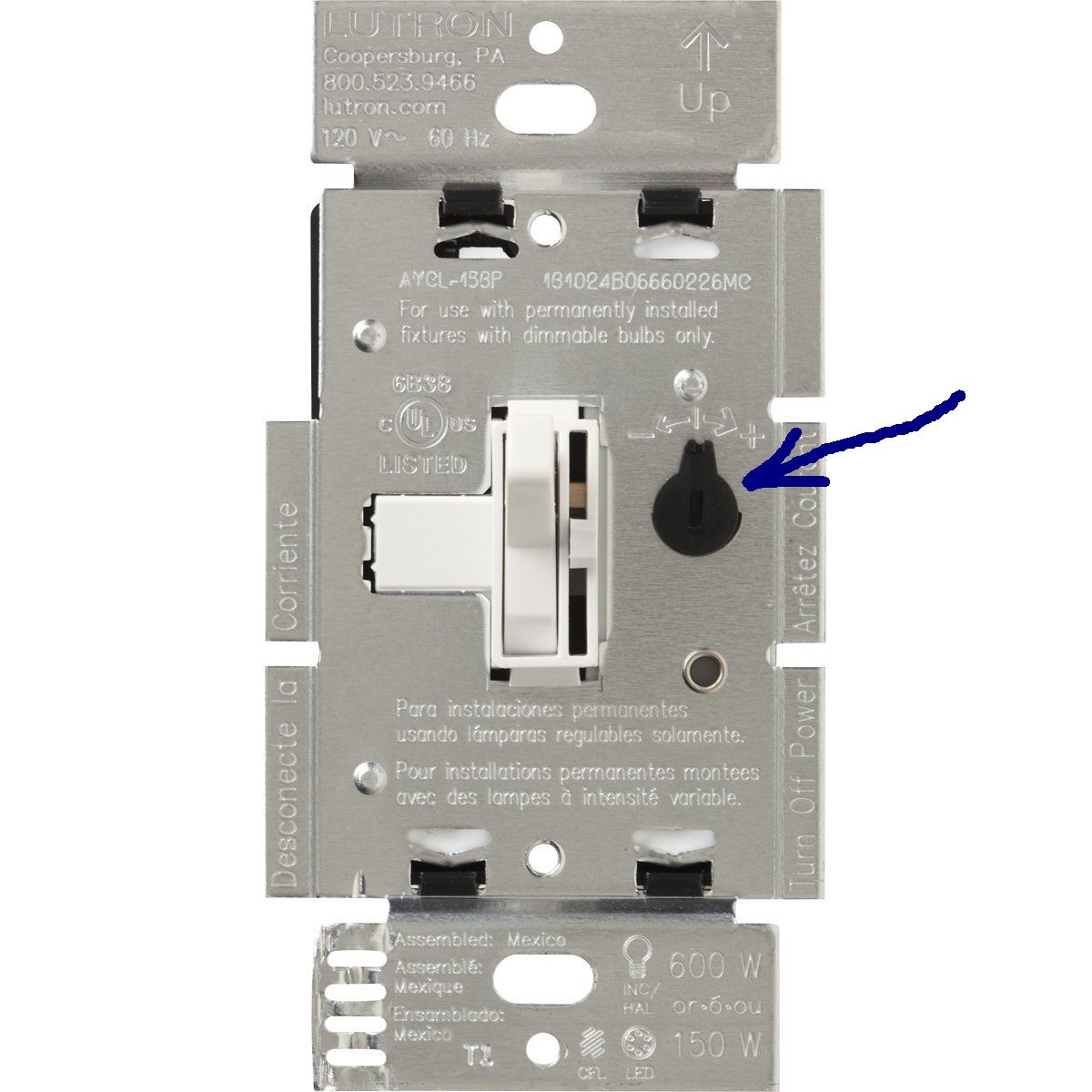 Even with dimmers specifically designed for LED or CFE lights, the manufacturers will tell you that LEDs will not dim with their products as much as incandescent lamps. If you want better low end brightness, here are my two ideas.

First, Playing with a few LED bulbs on a bench with a variac, it becomes apparent that they can be made to dim very nicely, almost down to a glow you could only see in the dark! But the only variac I have or have seen are huge, expensive, and made for much higher wattages than you'd ever need for a LED, or even a bank of LEDs. But if any manufacturer makes a variac for small loads that might fit in a wall plate, it would offer a full range of control. They probably would not be as easy to turn as a pot, but it is one solution.

Here's another solution, more practical at least for the low end of brightness. These days, its not difficult to find small capacitors up to about 5uF at 200WVDC. Experimenting with a bank of 8 Dimmable 40 watt equivalent (5 actual) LED bulbs, I substituted several capacitors in series with the load. interestingly, 2.5uF offered a lighting level that was just about the same as the minimum brightness I could get before cut off with a standard dimmer. Further, I found that down to about 0.5uF, I could get the equivalent of a very low night-light setting, with the only issue being that small manufacturing differences between the various bulbs start to become very apparent. But the point is, since capacitors will not waste any power (nor heat up), it might be possible to use a rotary selector switch with multiple positions, to control the LED levels, IF you were satisfied to simply wire one position as a full brightness bypass. Because beyond about 5uF, such higher voltage non electrolytic capacitors will start to get too big to make the idea practical.

Simple, ELV vs MLV dimming. Check the light, if it is MLV be certain you have an MLV dimmer. If you have a ELV light, put an ELV dimmer. Works fine. Have to be a bit more inquisitive up from. Of course then is it line dimming or 0-10. You don't want to deal with 0-10 because you have to add extra wiring.

Not the answer you're looking for? Browse other questions tagged lighting led bulb dimmer-switch or ask your own question.

2
What type of bulbs dim to lowest setting?
3
Can I put dimmable LED bulbs in a ceiling fan fixture and wire it to a dimmer switch marked LED compatible?
1
LED bulbs and LED dimmer
1
LEDs in a multi-bulb fixture only dim when installed alongside a single 60W incandescent bulb
0
LED bulbs will not turn on
0
Can I tell whether a LED driver/bulbs are dimmable without damaging them?
0
Why do some LED lights go dim while others go out completely?
1
Do LED dimmers work with non-LED bulbs?
0
Switching off dimmable LED flashes then switches back on