What equipment could I use for digging out a basement after the house is built?

My mother and father built the home I live in many years ago. It only had a half basement. My father had started on the other side, but passed away before finishing it. I have now taken this job on. I have removed approximately 100+ 5 gallon buckets of dirt, chopping and picking away at it, shoveling it into buckets and carrying it from underneath the house.

Is there a piece of digging equipment that I could rent or even buy, that would make this job just a small bit easier on mine and my husband's backs? A whole lot easier would be great, but I would settle for even a small bit.

The standard (as much as there is one) technique for this these days is to jack the house up to the point that smaller power equipment (which is not cheap) such as a skid-steer loader can be used - and so that the basement walls can be removed (with the house supported on blocking) and replaced with new ones to full depth, properly supported on footings. Some types of "trencher" may also be of use in this job. Sometimes the house is simply rolled off to the side once jacked up so that a new foundation can be built (without the house in the way), or a new foundation is built on the property and the house is moved to it, then the old one is demolished.

There are companies you can hire for the job, and that is by far the most usual approach to it.

Unless the current foundation is "full-depth" (ie, walls in deep trenches, with the dirt left on the inside for later digging out) it can, as suggested by @djs be hazardous to both your house and your life to dig below the current level of the footings that the walls (and house) sit on.

One obvious improvement from your described approach would be to build a ramp from the basement (possibly involving digging some outside the house) so that you can use a wheelbarrow or cart to roll excavated dirt out from under the house, rather than carrying it in buckets. In some cases a conveyor might be of use, but that's a fairly expensive and fiddly (lots of moving parts, and sensitive to overloading, etc) approach. If you cannot make a long ramp and have a typical steep bulkhead, wheelbarrowing to the bottom of the bulkhead and transferring to a smallish box on wheels running up a track (probably wooden) on the bulkhead that you pull up from outside (thus smallish- too heavy makes it miserable) would be much better than carrying buckets upstairs.

In the more desperate case where you don't even have a bulkhead, a ramp could be built to allow you to roll a box of dirt out a window, if there are at least basement windows to work with.

I worked on a job where they did just what you are describing - only on a large, 3 story turn of the century home of perhaps 10,000 sf. A number of guys dug for more than 3 months under the building, and they used one of these conveyor belt setups. 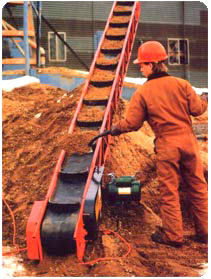 But as mentioned above, this is potentially a very dangerous undertaking. These were professional builders with engineers managing the whole project.

My suggestion would be rent a Ladder hoist/laddervatoy from a rental place.You my have to modify the way you send the buckets up.Possibly build a crate for you to put the bucket in.Make sure you get the maximum lifting weight specs from the rental place.Mine lifts 400lbs but I know most lift 250lbs.I can't say I ever did this yet but im going to do a test run because of a job coming up.I let you you know what the results are afterwards.

11
What are our options for carpeting the basement of a split-level house?
6
What type of subflooring should I use for a basement?
2
what impact tools are needed for subfloor in the basement?
3
What is the best flooring for my basement?
3
What Material for Basement Walls?
7
Should window well for basement window be attached to the house?
2
What kind of soil mix to use for grading the perimeter of house to keep water away from basement?
2
What are the possible consequences of excavating an exterior basement wall?
0
Can I use the built in vacuum system for ventilation
3
Buying a house that has a natural spring flowing through the basement out to a pond. What to do?