My wife and I are thinking about buying a funky old house where we live, in southern Ontario, and trying to prioritize upgrades. There's a lot of knob and tube to replace -- top priority -- and some old iron plumbing stacks that will probably be second tier.

Third tier gives us lots of options, but nothing mission critical like the wiring or the plumbing. One strong contender is replacing the hot water rads, which are all those old baseboard "public school" style -- large metal boxes with dials on the front -- and seem to be several decades old, at least. The boiler system seems to date from 2002 and has been inspected annually and seems to be, on cursory inspection, in good shape.

The question is obviously if there's a huge efficiency gain in upgrading them. The utility bills (for the gas-heated boiler, plus electricity) from the previous tenants seem high, but they're also fairly wealthy and quite elderly, so they may have just kept the place jacked to 80 degrees all year round without much thought to consequences. Windows are about 80% upgraded, so there's work to be done there as well, but I'm mainly wondering if replacing baseboard hot water rads with new models is a "pays for itself" upgrade or mainly an aesthetic choice.

EDIT: Here's a not dissimilar picture to what we're looking at: this style, but twice as deep (it extends twice as far from the wall), and with a knob in the middle of the vents. I've assumed the knob opens/closes some sort of valve, or controls something with the vents, but I cheerfully acknowledge that I really don't know exactly what's up with these. 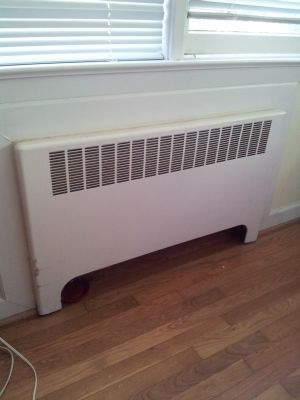 Why is knob and tube top priority to replace? It's quite safe if left alone. You only need to replace it in visible areas: the stuff behind the wall doesn't need replacing.

You might want to add some circuits in certain rooms, but you don't have to remove the old ones.

No upgrading the radiators (from your description they don't sound like baseboard heaters) will not increase efficiency. Forget about "huge efficiency gain" - it's doubtful you will have a gain at all.

What might increase efficiency (somewhat) is balancing them. An old house like that probably has only one zone, so you need to adjust the settings on each radiator so that the house is balanced - that some rooms do not end up hotter than others.

This can take a long time to do. To start with, do nothing - someone might have already done it for you. Then see if the rooms without the thermostat are hotter or colder than the one with. If all the rooms are hotter/colder, then adjust the radiator near the thermostat the opposite way.

Now that you have it mostly set, start adjusting each room based on the temperature. Wait like a day between each change and be aware the correct setting may vary based on the outside temperature, which is annoying, so you'll just have to find some reasonable midpoint.

If you want to upgrade anything it should be the insulation on the house.

Upgrading the radiators won't directly offer any efficiency improvement. It's pretty hard not to get 100% efficiency when you're just radiating heat from a heat source.

To improve the efficiency of a radiant heat system, you need to upgrade the boiler - and to get the most efficiency out of them, with a gas condensing model, you need a lower water temperature than old school radiator systems were designed to run at (~120F rather than ~180F). You may need to upgrade the radiators to be able to get enough heat out of your system from 120F water, but it's not necessarily the case.

Assuming the current boiler is a typical 80% efficiency model, you won't get huge savings out of upgrading to a top of the line gas condensing boiler - no more than a 10-20% reduction in heating costs. If you need a new boiler anyway, the difference can be cost effective, but ripping out a perfectly good working system may not be.

The high utility bills are probably a consequence of poor insulation and air sealing in older construction rather than inefficient equipment.

The radiator you have is like the one in the picture but is deeper from the wall and has vents on the front and a knob in the middle on the front. The knob controls a mechanical damper to increase or decrease the flow of heat from the radiator. Quite often the knob and thread get painted over and won't turn. Also the threaded bolt that is attached to the damper will come out of the damper nut leaving the knob to turn either way doing nothing.

First take a flashlight and shine it through the vents to see if there is a damper.

If there is, take out the top screws on front cover off the raditaor. Just pull out the top and tilt it. You don't need to take the cover right off. Then attach the threaded knob bolt to the damper. There is a lip/ridge for the damper to pivot on. Make sure the damper is on it. Push front cover back on at the top and replace the screws. In short the knob in the middle only adjusts the damper which controls the air flow of heat.

Not the answer you're looking for? Browse other questions tagged boiler radiator hot-water or ask your own question.

2
Should I replace all the copper pipe in my heating system with PEX?
4
Can baseboards be used in one pipe steam heating system?
0
Do radiator covers harm heating efficiency?
0
Would pipe from radiator to bottom of hot water tank be supply or return?
0
Would replacing my boiler's control board resolve intermittent issues after a water leak?
0
How can I improve recovery time of my hot water baseboard system?
1
How do I bleed a very old radiator and identify whether my system is steam or hot water?