I'm trying to figure out the max load ratings for some shelving at our shop.

It is 2x4's pine that spans 4 feet across and 30" deep with 2x4's as joists and angled 2x4's for support for each section. Then the 4 foot sections are fastened together in succession. They aren't currently mounted to anything, they can't be to a wall where they currently are sitting (electrical room and needs spacing in front of electrical panels) but will be fasted to the floor. 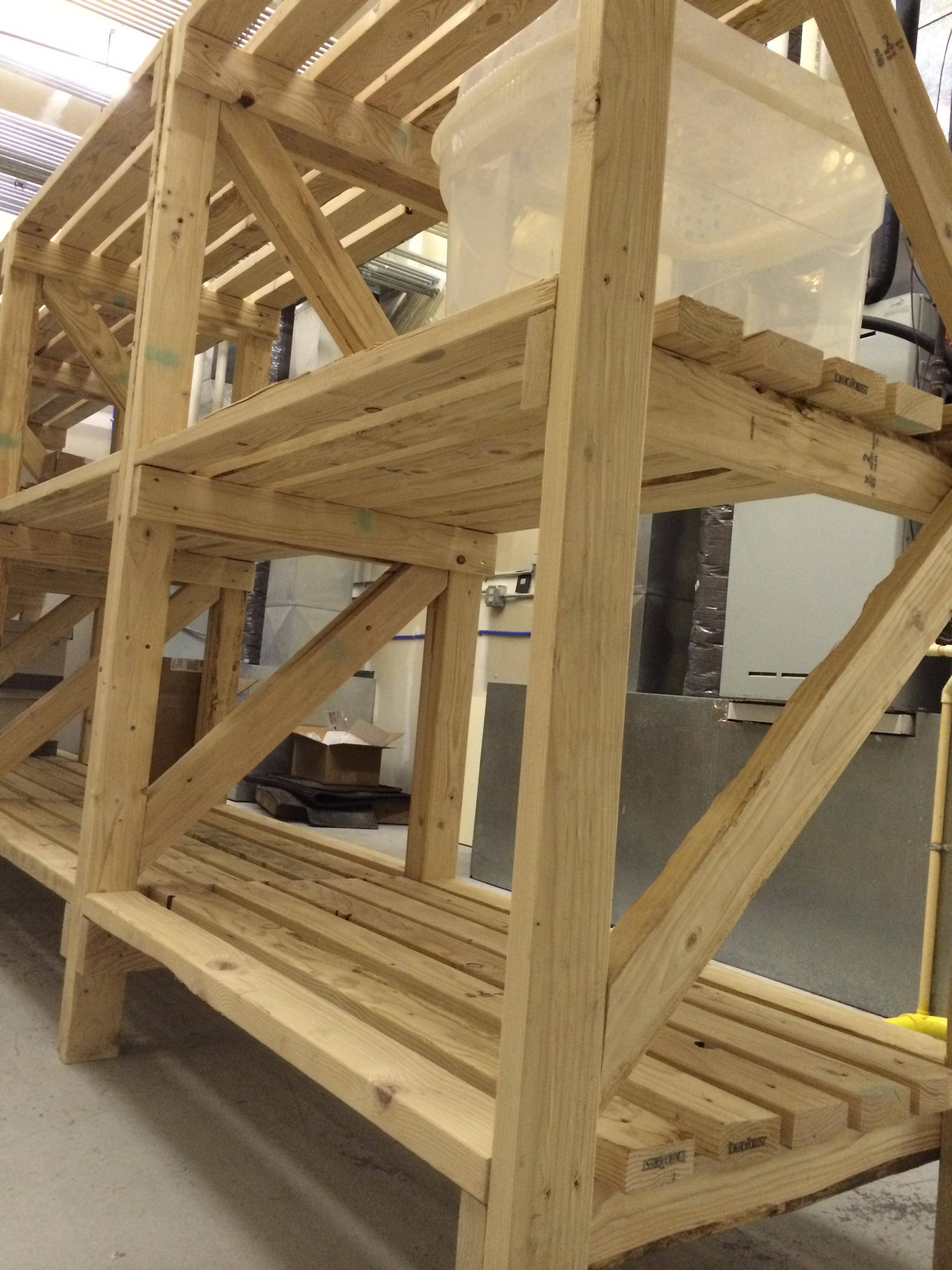 To calculate the max load, you need to check the capacity of each piece and identify which one will fail first, in other words whatever has the lowest capacity is your max capacity. In some cases, you'll have load spread across multiple pieces, e.g. each of the decking boards will carry some of the load for the shelf and send half, give or take, to each side. This will all depend on how the load is distributed on the shelf itself, and it's a good idea to be conservative and assume someone places a heavy item on a single side and on a single board.

To start, you can check the weight bearing of a 2x4 turned on it's side for the two sides, and know the capacity can't exceed double that (since there are two sides, but I'd be conservative and assume all the load was applied towards a single side). Next, you can run a similar calculation on the 2x4 decking where the boards are turned flat and over a longer span. This will likely be a smaller rating per board and you'll have to decide how conservative you want to be with the load spread over multiple boards. The next piece of structure you have are the verticals which have to support all of the shelves down to the floor. This is compressive force where the 2x4 is strongest, but you'll want to run this calculation to be sure. Lastly, and where I and CoAstroGeek both suspect you have your weak point, you have the fasteners attaching the sides to the verticals. If those are simple nails, they have a small shear force compared to bolts and could also pull out if there's a sag in the decking.

When looking at how much weight each point can support, don't forget to include the load that's already there from the shelves themselves. So for the horizontal sides of the shelf, they need to support the weight of the 2x4 decking. And the vertical supports running to the floor have their share of 3 decks and sides.

Of course the practical method to calculate the max load is to get some weights and load up a unit until it fails, and then see how much it took before it broke. Or if you don't want to destroy a shelf, use the weights to double check your calculations once you believe you know a safe capacity. It's better to test the shelves when you are being extra safe and expecting a failure than when workers are being careless and a failure could injure someone.

Lastly, I agree with CoAstroGeek's concerns about the lack of diagonal bracing along the long axis, this could easily rack and collapse under a light load if any lateral force is applied.

Not the answer you're looking for? Browse other questions tagged wood or ask your own question.

5
What materials do I need to install pantry shelving?
13
How to calculate the maximum safe load on a horizontal wooden beam?
0
How do I calculate deflection in shelving boards?
0
What kind of Extruded Aluminum sections to replace main wooden frame on this DIY project?
1
Where can I find load ratings for two-by lumber laid flat?
1
Leveling techniqe for wooden floors
0
Is “unstructural plywood” suitable for shelving carrying a microwave oven?
0
Can I use slot shelving in a wooden shed?
0
Best fix for failing built-in storage cabinet base?