How do I build a sound dampening box for a pool filter?

I have a pool filter next to my house in the 1.5m between my house and the boundary. I'd like to build a box around it to dampen the sound a bit. I will still need periodic access to the filter for maintenance. The filter is out of sight, so there is no need for it to be pretty. What is the best way of doing this? 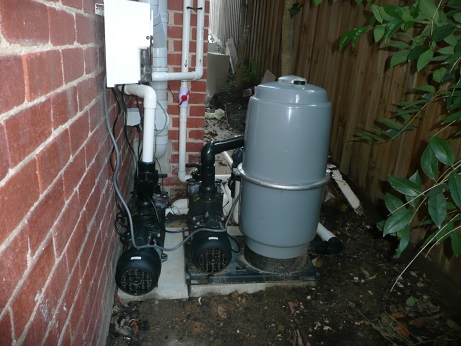 I think the point to the question was to build a soundproof box more than buy a new motor, although good suggestions for power and such.

From some research on similar topic and some personal experience I have discovered that looking at the mounting of your motors is very important. Sometimes placing a rubber or similar vibration absorbent material between the motor and whatever it is standing on reduces referred vibration and low level tones that are almost impossible to sound proof. Spend time getting the low level vibrational sounds sorted out.

As for a housing, for me their was already a small brick wall around the pumps. I used ply board against many recommendations to build a housing then lined the inner area with heat resistant foam and a lightweight insulation material called "think pink" (in South Africa).

The padding is lightweight enough for me to lift the cover off to get to the pumps and the gap and ambient temperature around the pumps when sealed is cool enough for the motors. Obviously not in direct sunlight helps.

Ventilation is always an issue as direct air exposure permits sound waves to "escape" thus one must use a bit of common sense to allow more ventilation if the pump house needs it to keep the motor cool.

I would not say the rig is 100% sound proof... Yet... Our bedroom is literally right next to the motor and you can definitely hear when the motor runs. So a lot better than it was. Can't hear the motor from any other room in the house.

How do they save you thousands? Your typical 1.5-HP pump on full speed will consume about 1500 watts, which is the same as turning on 25 60W incandescent light bulbs. You've got something in your backyard that is akin to leaving all of the lights in your house on while you go to work for 9-10 hours. Pool pumps are a MASSIVE consumer of electricity.

Furthermore, running a pump on full speed is terribly inefficient. All that noise and vibration that a pump makes while on full speed is wasted energy. On top of that, there's loads of energy wasted by the high operating pressures (which just serves to make wakes in your pool -- not incredibly useful) and increased resistance in the plumbing. Full-speed pumps operate at 15-40 PSI, but two-speed and variable-speed pumps operate at 0-3 PSI.

Did I mention that they're whisper quiet? Here's a demonstration of an Intelliflo: http://www.youtube.com/watch?v=4dIz4R-1d2k (keep watching to see it run in slow speed)

Another thing that you can do to lower the noise is to clean the basket often. When a pump has to deal with leaves clogging up its intake, it will get loud as hell -- sometimes even getting more than twice as loud as it is when it is clean. The increased noise is caused by cavitation, which happens when there is either insufficient back-pressure (not a problem for pool pumps,) high pressure, low-flow conditions (not a problem for pool pumps,) and when an impeller is starved of water (a problem for pool pumps.) "Cavitation" is the term used to describe what happens when air pockets form behind the impeller blades. As the impeller blades cut through the water, they create small low-pressure pockets behind them, which can cause air to fall out of solution and can cause liquid to instantaneously become a gas (i.e. drop below "vapor pressure",) forming air pockets, which then rapidly collapse (often at the speed of sound,) causing large amounts of energy to ripple through the water. This creates a lot of noise and is terrible for the impeller.

I'll let someone else provide you with a passive soundproofing solution, but don't overlook the fact that you can install it not only outside, but also inside, within the sheet rock as well.

A Standard thing to do (where i live) is to cover the pool motor with a plastic/fibre-glass cover, you just need to cut the locations of your pipes and fittings, otherwise, the box is really effective in sound dampening.

Also, I have noticed that some makes of pool pump are really silent, (for me i like the speck brand). .

link to the pool covers here

Not the answer you're looking for? Browse other questions tagged pool sound-proofing or ask your own question.

14
What is involved in DIY swimming pool maintenance?
12
How can I sound proof bathroom walls?
3
Should I use PVC or ABS pipes for a swimming pool control system?
1
Framing interior non-bearing wall with 24" on center for sound proofing
8
Would covering walls with a sound absorbing foam reduce the transmission of medium-high frequency fan noise?
0
What to do about particles floating in pool?
1
Cancelling needless freeze protection on pool filter
1
Running electric to swimming pool pump
2
How to access the ceiling over an indoor swimming pool
0
Can I use bentonite as a lining for a normal swimming pool?