How to fix a tap where the handle has fallen off

I have the following tap / faucet: 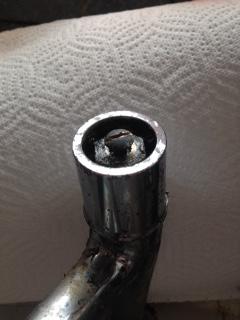 As you can see, it's seen better days. The handle of it was composed of four plastic interlocking pieces which have, piece by piece, broken off.

We're due to get a new kitchen soon, so I don't want to spend any money on it at this stage. My initial thought was to replace the tap, but it's part of an enclosed unit where I physically can't get to the underside of it.

I visited a local DIY shop, and he suggested this: 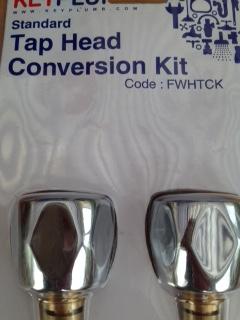 This sounded like a brilliant idea. Apparently the concept being that you simply unscrew the top of the tap, remove the cylinder and replace it with this. Having unscrewed the screw that is visible in the above picture, it appears to be effectively impossible to remove the top of this tap.

So, my question is broadly, how can I rectify this without changing the tap? Firstly, am I correct in assuming I should be able to simply slide to top section of this tap off once the screw is removed (I've tried WD40 and a good bit of force, but it's not coming)? Secondly, assuming that this isn't possible, is there such a thing as a "glove" that simply slides over the top (the tap works okay, it's just hard to turn off and on)?

From my point of view (image is very small and poorly illuminated) you face a hexagonal ending of the shaft, when looking at the top of the tap. My first try was to get a wrench socket, which fits the hexagonal stub. It may be difficult to find a matching wrench socket small enough to fit into the housing of the tap, but you could take a cheap one and grind the outer diameter down until it fits. then you screw it down with a matching screw and insert a short t-handle. Alternatively you may fix a valve handle to it via a sqare axis reaching from your wrench socket into the handle.

Take a considerably better picture than that (with a ruler in the pictures so sizes can be judged accurately), and possibly a clay impression of the place the handle goes, and shop for a replacement tap handle.

I suspect the screw in your picture is just to hold the handle on.

I suspect the round outer part above the water spout turns. However, it may be impossible to remove.

Would probably be easier and less frustrating just to replace the tap. (Sorry.)

Not the answer you're looking for? Browse other questions tagged plumbing faucet replacement plumbing-fixture taps or ask your own question.