I few years ago I installed tile on the wall of my bathroom. I needed a little hook for a hand towel in the tile, so I drilled two little holes into the grout in between two tiles and screwed the hook to there. Just recently, the screws just slid right out. How can I screw the hook back in? Could I just use bigger screws? Or could I get some sort of glue substance, and put it in there and then slide the screws back in and let it set? What do you recommend? Here's a photo: 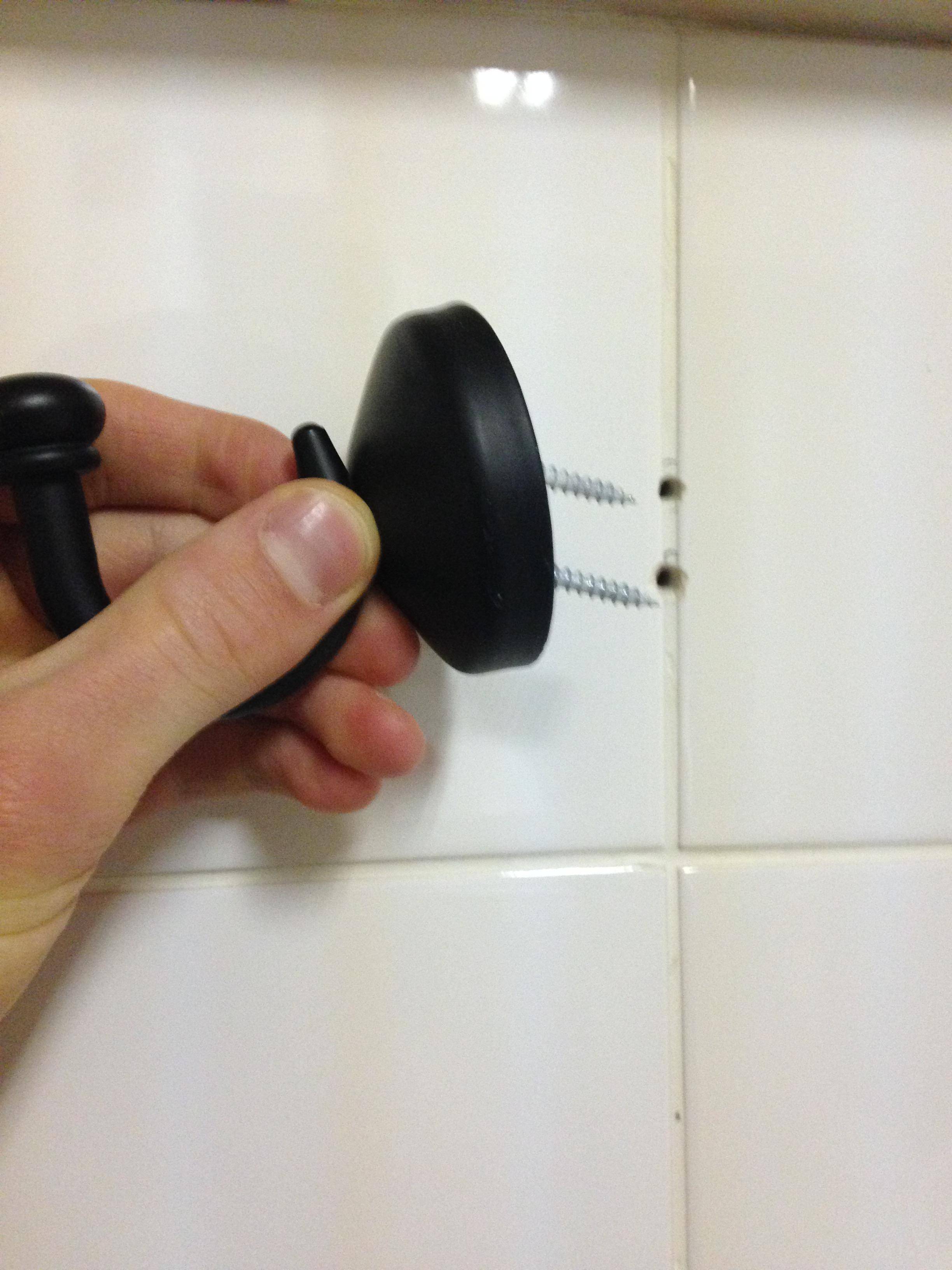 I see two ways to go about fixing this:

1: fill and grout the existing holes. Then buy a tile drill bit and 2 tile anchors and re-install in the middle of a tile.

2: get the cheap plastic anchors and epoxy them into the existing holes. The disadvantage of this is that the area between the two holes will flex slightly and eventually the grout will break down, compromising the mechanical retention of the anchors.

Fixing this could take several directions.

If you have access to the other side of the wall from where the hook was mounted it may be feasible to open up the drywall from that side and install some wooden backer between the studs that can accept slightly longer screws from the tile side. Fixing up and re-finishing an access hole in drywall would be be far easier that trying to re-work the tile wall.

The size of the face plate of the hook looks like it would cover up a bit larger hole made between the tiles. Such hole may actually need to chip away at the edges of the tile some too. With a larger hole you can push through a fastener called a toggle bolt which would anchor to the opposite side of the wall material in the mount area. If you choose to use a toggle bolt approach consider applying a ring of silicon sealer between the bracket and the tile on the back side of the bracket. When this sets up it will take up the sheer load on the hook. Toggle bolts work best for pulling the load directly up to the wall and the hook could slide around on the wall due to the larger hole size and force that was parallel to the wall surface. The silicon can help prevent that problem.

Use care in how you go about enlarging the hole as you could end up cracking the tile if you try to force a regular style drill bit into the grout line. A small diameter tile hole drill would be recommended.

For this application I would discourage the use of other types of expanding wall anchors such as the cheap plastic things you press into a hole before applying the screws. They will eventually fail in much the same way as your current fail.

Not the answer you're looking for? Browse other questions tagged walls tile ceramic-tile hanging or ask your own question.

6
What size drill bit do I need for a 3/16" plastic anchor in tile?
3
How to remove a tile with floor heating mat
8
What are reasonable expectations about grout width accuracy in a professional tile installation?
0
How do I glue moving ceramic tiles without removing them?
4
Sanded Grout in Stone Tile Floor Keeps Disintegrating
0
How do I repair improperly backed shower tile?
8
Water seeping from grout in tile shower
0
Floor tile layout suggestion and backer board or not?
2
Is grout required behind shower knob trim plate?
1
Tile making clicking noise when stepped on and grout flaking away