How to seal between sill plate and foundation wall with wide gap?

Here is a picture of the top of my uninsulated basement wall. The foundation is poured and from early 1970s. For orientation to the photo: the white in the lower left corner is the vertical face of the wall. The horizontal board is the sill plate. Attached to the sill plate is some mortar. In this photo it has separated from the top of the wall. (Edit: the picture happens to be in a location directly above a basement window, and the mortar has separated from the frame above the window. However, there are places along this wall where the mortar has indeed separated by a fraction of an inch from the poured foundation wall. An eighth to as much as a quarter of an inch, except above windows where it's more like 1/2")

I am in the process of insulating the rim joists. I'm using rigid foam board instead of spray foam, and I'm using caulk instead of Great Stuff / expanding spray foam. As part of the job I am trying to seal the gap between the sill plate and the foundation wall. In the places where the mortar has not separated from the wall, it's easy enough to just run caulk along between the mortar and the sill plate. However, where it has separated, I need a better solution. How can I do that?

If the gap between the sill plate and the wall was a little smaller, I could just run caulk in it. However, since it's maybe 1/2 an inch, would it be better to shove a narrow strip of wood into the insulation to give the caulk something to adhere to? Or I could cut a narrow strip of wood (say, 1" by 1/4") and staple that to the front of the sill plate in a fashion that covers up the insulation gap and then caulk along where that strip meets the foundation wall and also where it meets the sill plate.

Is there a better option you'd recommend? 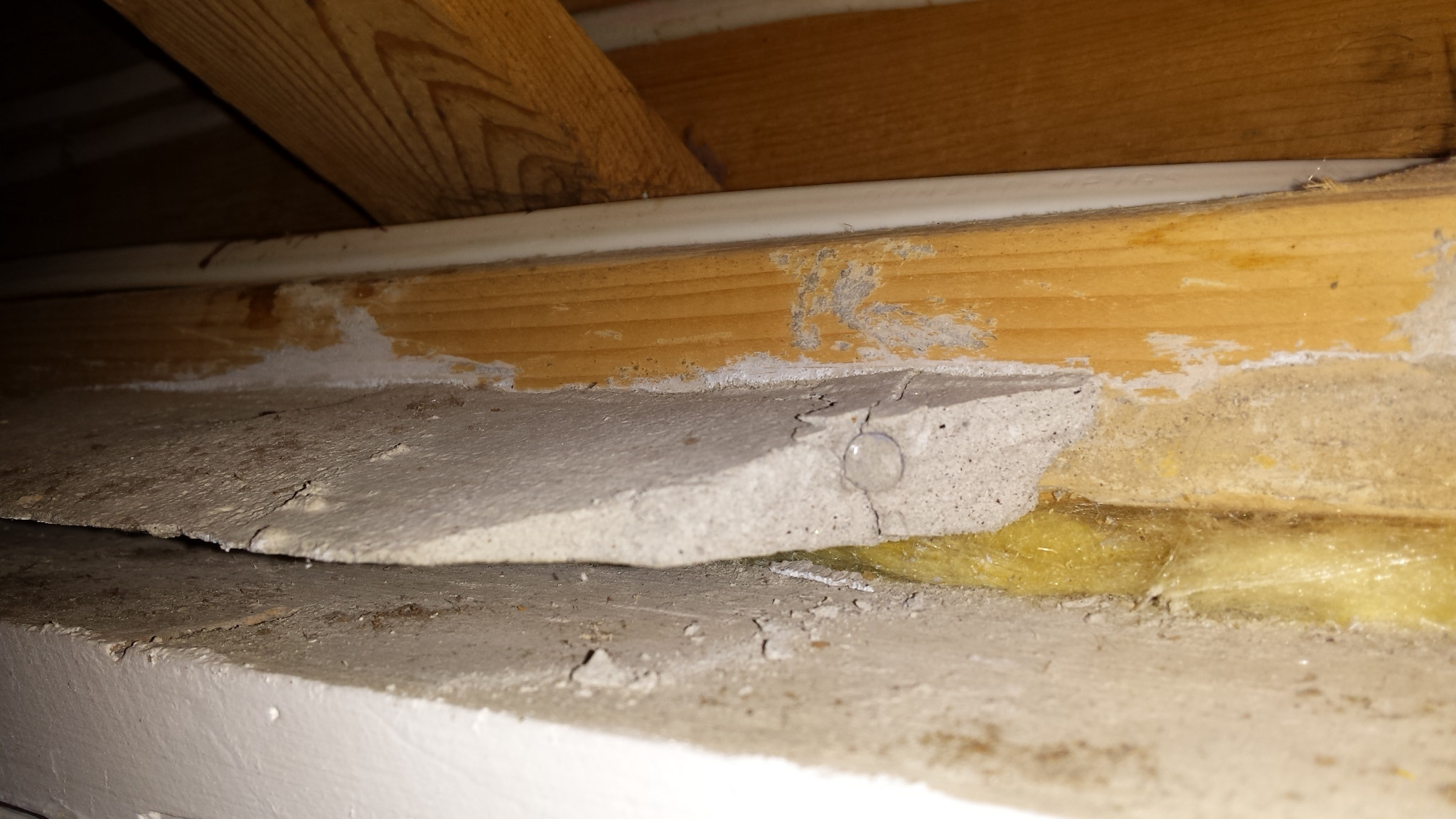 That's my main question, but here are another couple of questions if you have interest or time.

Below is a stretch of wall where I removed the mortar that had separated from the top of the wall. You can see that the mortar on the right side of the photo has not separated from the top of the foundation wall. What the heck is the purpose of the nail that is sticking into the sill plate? It was buried in the mortar that I removed. You can see the head of another nail in the mortar in the image above. Seems weird to me...though I have never done this type of work. 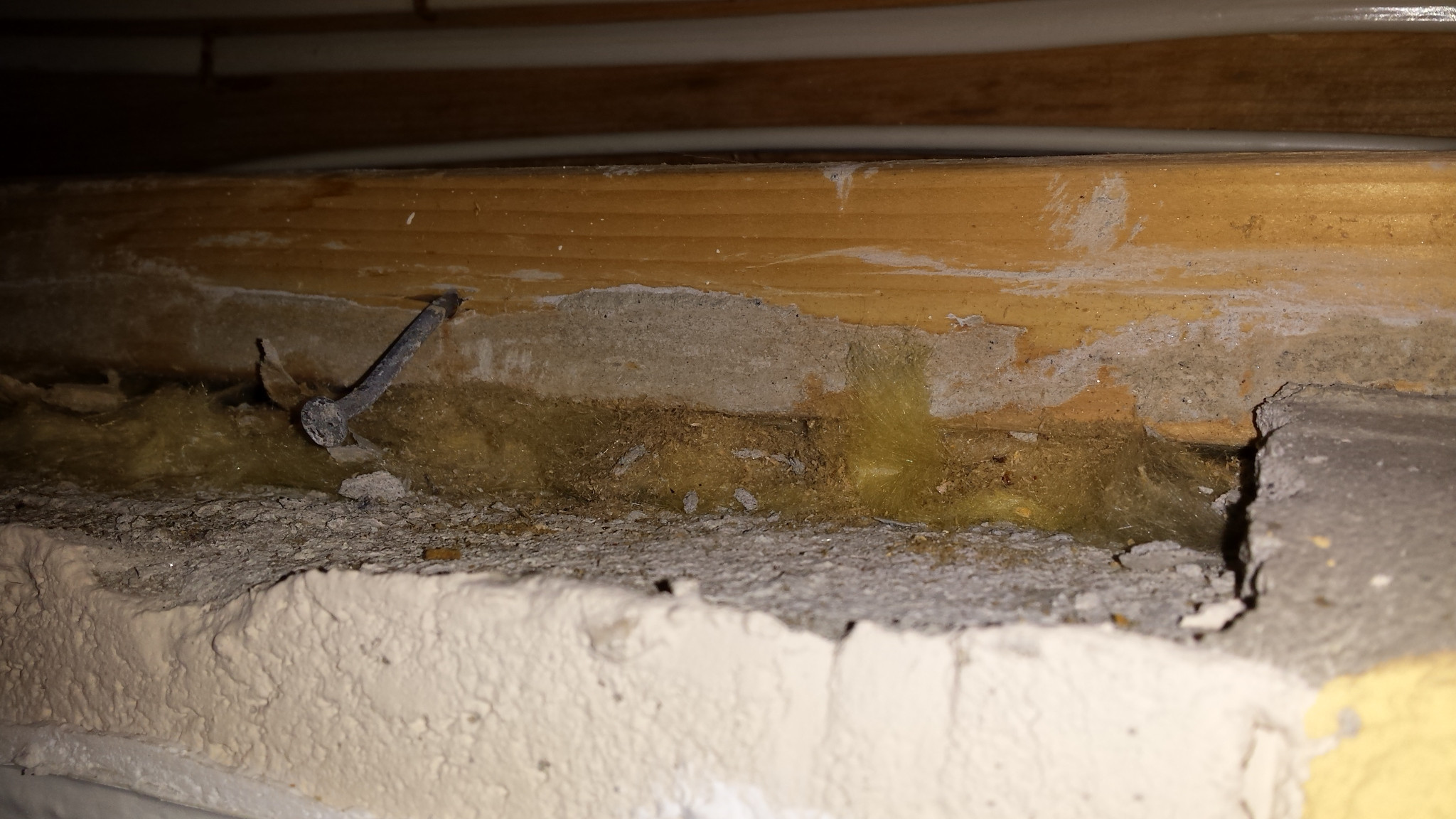 What is the yellow insulation that is underneath the sill plate called? Why is the gap so tall? I would expect the sill plate to be basically right on top of the foundation wall with only a tiny gap.

And what is the purpose of the mortar along the top of the wall in the first place? Is it basically an attempt to stop air infiltration?

Edit: as follow-up to a comment I made, here's a picture of an anchor bolt in the sill plate. 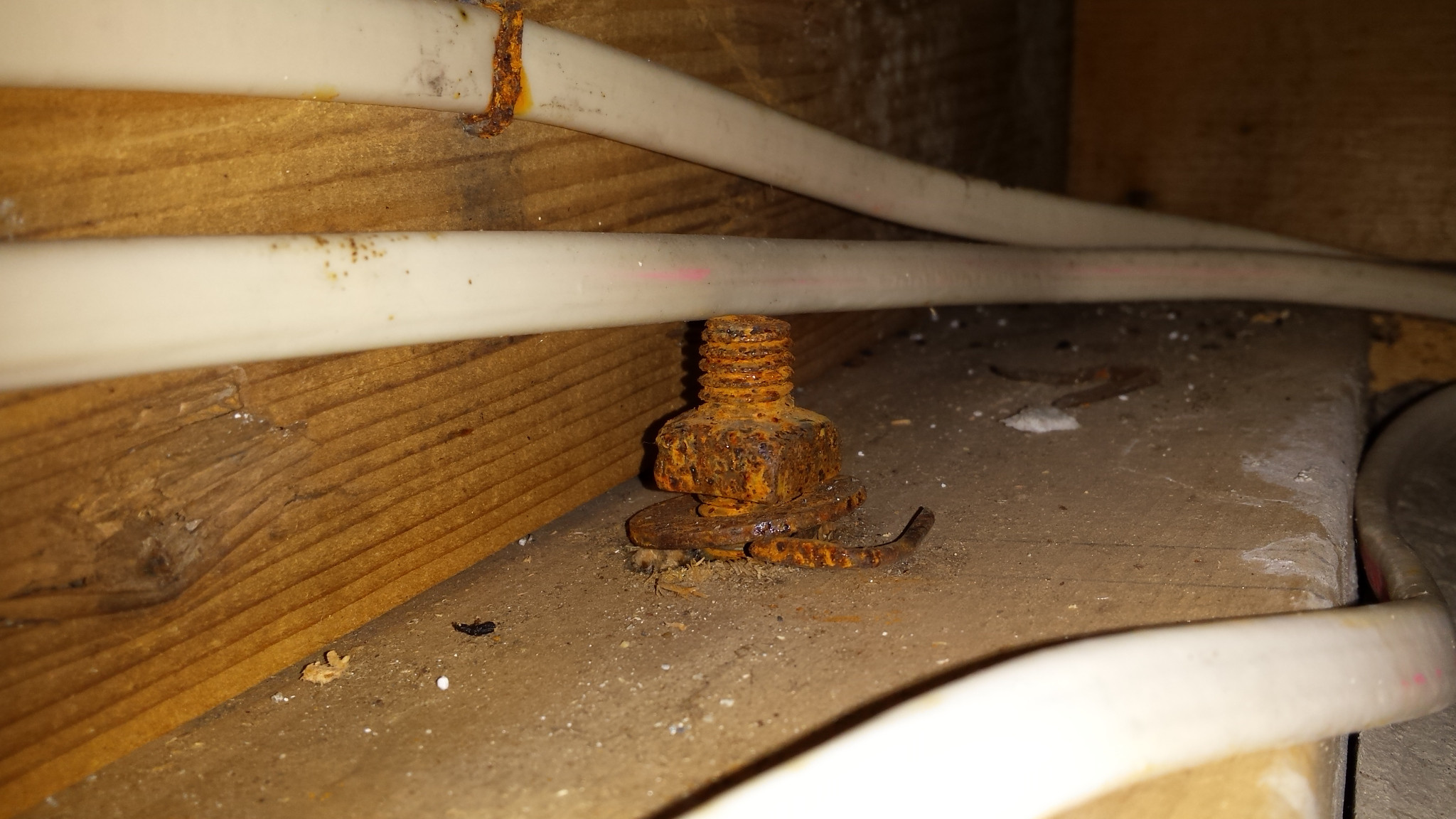 Remove ALL the mortar throughout.

Let cure and then cut off square.

Drywall the face of the sill plate to cover the foam for fire safety.

The yellow looks like standard spray-foam poly insulation (available under multiple brandnames). It's a compound chemically related to superglue which (a) expands and (b) cures upon contact with moisture. It's reasonably easy to apply and provides a decent air seal, so it's often used to fill cracks around doors/windows/foundations that would otherwise let air leak through. It's a perfectly reasonable gap filler and a moderately decent adhesive... so using it to fill in damaged portions of that mortar wedge seems pretty reasonable to me.

(There's a professional spray-foam sealant/insulation which can be used to achieve a much more serious/durable air seal around the sill/foundation joint. But that's a different chemical and tends to be tan rather than yellow. My place had a band of that applied as part of a general air-sealing upgrade shortly after I moved in.)

As an answer to a question: how to fill that gap between sill plate and foundation wall?, I would advise to use self-levelling concrete (or whatever You call it). It's most often used to level the floor before putting anything else (if the floor base is concrete and not level or the surface is not 'mild' enough to place a carpet or something.

To make it correct do the following:

Additionally, here are some short answers to other questions.

At the end some explanations:
- why self-levelling concrete? - it can bear the loads from sill plate and deliver it to the fountation wall (obviously better than fiber glass...)
- why continuous foil under the sill plate? - that will assure that the moisture will not pass to and corrupt the sill plate if the concrete basement wall will be wet (whatever the reason)

I would peel back the onion and take a better pic of the whole wall, you mentioned a window , then I would consider the window potentially leaking to where nails pulled due to warping moisture , peel back the onion and expose the concern.. as for the nail sticking out, it was probably due to laziness and not taking it out and covering it up with mud.. reinforcing the mud probable but then there would be more along the joint my two cents

Not the answer you're looking for? Browse other questions tagged insulation foundation sill or ask your own question.

6
How to properly seal the transition between basement wall framing and spray-foamed box joists?
4
What can I do about this gap between the sill/exterior board and the subfloor?
2
Attaching sill plate to concrete, how do I attach framed wall to sill plate?
0
How to attach a new sill to an existing concrete foundation
1
How could one insulate sill plate from the outside?
1
How to protect foundation, sill, and siding from moisture (snow)
1
How to repair rotted sill plate on foundation concrete pony wall and adding height to concrete wall
1
Covering Exposed ICF and sill plate?
0
How to protect this foundation sill from elements, rodents?