How do I prevent water from leaking into my basement?

How do I prevent rain water from leaking directly into the basement? As you can see in the diagram below, rain water drains into small concrete cracks (near the bright red line shown below) and finds its way into my basement. Over the years I have tried a couple things to help remedy this situation.

But despite doing this I am still getting water in the basement when it rains.

Now I'm thinking about breaking the concrete and dig into the outdoor patio area near the bright red line shown below and tightly repack with dirt. Then add another layer of cement on top of the repacked dirt. But I'm not sure what else I can do?

I would really appreciate if the community could provide suggestions on how to keep rain water away from going into the basement. 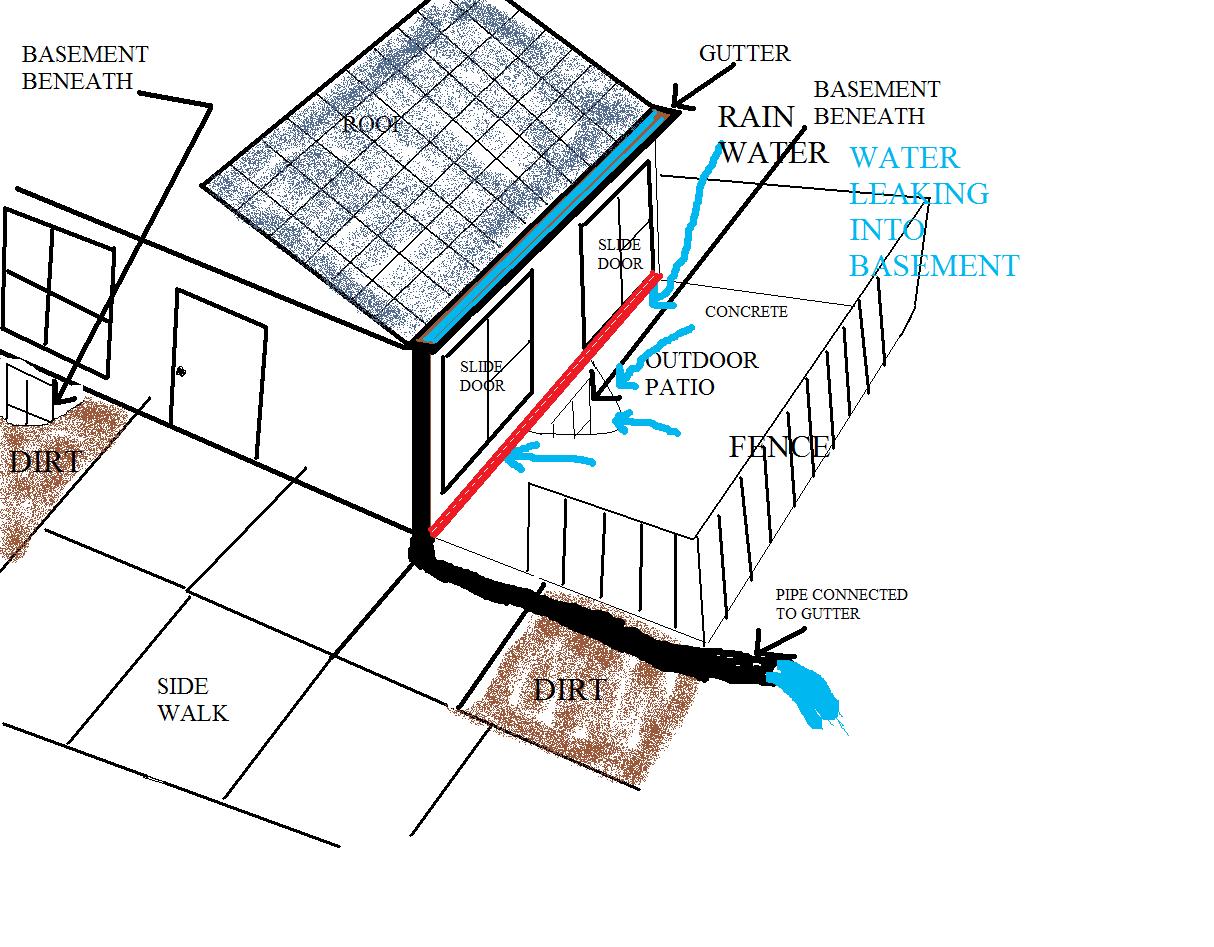 Based on your clarifying comments, I come to the same conclusion that you have...it's the concrete slab that's the issue. By the sounds of it, it's actually routing water towards your foundation.

I had this exact same problem at my previous house. One side of the house had a concrete slab. Unfortunately, whoever poured it did a terrible job. By the time we purchased the house, the slab was sloped towards the foundation. Someone had previously tried to remedy this by applying a leveling compound on top that was now flaking off. As it was a monolithic slab (and was in MN) it also had huge cracks all over the place.

Whenever we got a severe downpour, we'd get a few puddles in the basement coming in from the footer. I purchased quite a bit of concrete crack repair (caulk) and filled in as many of the cracks as I could and all along the joint between the concrete patio and the foundation. That'd work for a season or two but inevitably the seasonal freeze/thaw cycles would open everything up again and I'd have to get more patch.

As we wanted to finish the basement, the eventual fix was for us to tear out the entire concrete patio and replace it.

I had a team come in with jack hammers and skid steers to remove the slab. I then brought in 4" of crushed rock and compacted the based ensuring I had significant slope AWAY from the house. I then put down 2" of sand, concrete pavers, and polymeric joint sand.

This fixed our water problems completely. I may have overcorrected the slope (the patio was noticeably sloped but I figured it was better safe than sorry. Our eventual paver patio ended up being about 10' out from the house, and slopped probably 8" from one end to the other. Never had water leak in that side of the house again.

Unfortunately, that is neither a cheap nor easy solution, but will say the pavers looked a lot better than the concrete in the end. The primary reason we went with pavers (aside from looks) is that we felt it'd survive the MN winters better and is a whole lot easier to repair if it ever needs to be. While there was a bit of settling here and there and the occasional weed or two you need to pull out of the cracks, for the most part, I was impressed at how maintenance free it was.

Call Mike Holmes. But seriously, he had a great show in which he has a very similar problem - we are talking 8 foot by 3' trenches around entire basement, waterproof cladding, rock, dirt barrier cloth and back fill.

In a nut shell - your attempt to get the water away from those exterior walls is a step in the right direction. Unfortunately, there may be so much water in the surrounding soil that the water content in the soil with put too much hydrostatic pressure upon the basement walls - leaky leaky.

Is this a finished basement - flooring, drywall etc? Worked on one basement in which a trench was put in the floor and drained to a sump pump. A waterproof floor was elevated over the concrete and the rooms finished - It was fine 10 years later. That said, I would not do that now as a general contractor - only the trench, seal, drain and back fill method.

First thing to look at is to make sure the patio and landscaping are graded so water falling on them tends to run away from/around the house rather than toward it, so water isn't being actively directed toward the basement wall.

After that, you're looking at some combination of waterproofing the foundation, french drains, sump pump if you need to bring water up from below grade level...

As @ChileabConstruction pointed out, the source of water isn't necessarily the surface (though that patio could certainly gather a lot of water that would otherwise run off). You may also have a situation where heavy rains cause the underground water table to rise; in that case what's happening at the surface may be almost secondary.

Not the answer you're looking for? Browse other questions tagged basement leak or ask your own question.

0
water in some corners of cement crawlspace

4
How much water is too much water underneath the basement concrete?
7
How do I keep heavy rain from draining into my house?
1
Water in Basement - Help!
2
How to repair leaking cemented crack in basement wall?
0
Wet basement: is the gas pipe the culprit?
3
Water dripping from basement ceiling during heavy rain
1
Water seeps through basement floor at drain exit during heavy rain
1
Should I dig a hole to pump water from under basement?